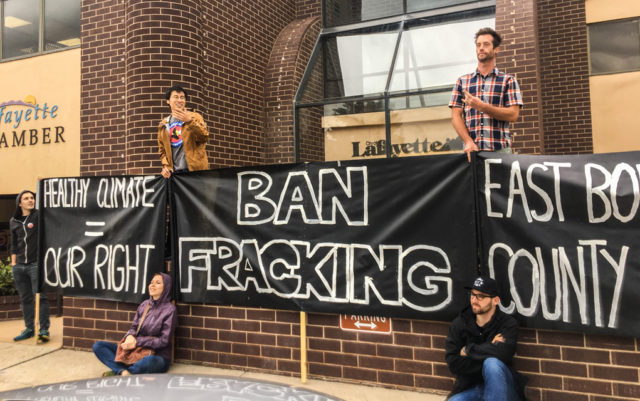 By 2011, when my family came face to face with fracking, Colorado was already 40,000 wells into “responsible oil and gas development.” At that time, politicians, industry and various Democratic Party front groups tightly controlled how people and communities were allowed to object. That tight control allowed wells to be drilled in a predictable and orderly way under a grand project former Governor Bill Ritter and the Colorado Oil and Gas Association (COGA) called the New Energy Economy.

Around 2012, a few communities broke from that scripted model of environmentalism. Longmont enacted a fracking ban. Although primarily a ban on a drilling technique, many of us in Lafayette misinterpreted Longmont’s ban as expansive, community-led civil disobedience for the environment and took off from there. Nonetheless, this first shot across the bow drove new ballot initiatives, organizing and protest that the political class just wasn’t used to. The situation got bad enough that then Governor John Hickenlooper, after joining the COGA lawsuit against Longmont in 2013, was effectively run out of that town by a group of 300 angry residents.

The place was never the same again. That said, the political forces behind oil and gas attempted to rein in rebellious communities and force them back to the original script.

At every stage, little grassroots efforts like our own East Boulder County United were attacked over and over for pointing out how this process of political weakening, aka scripted environmentalism, works and to what effect. Behind it all is the state’s compulsion to force people back to the political class’s original definition of “environmentalism”:


1) A subservient and codependent relationship with the Democratic Party


2) Activism dominated by professionals, who are in continual need of funding sources


3) Demands that rely for resolution on the same system that created the ecological disaster Colorado has become.


4) An acceptance that environmentalism is a negotiation between the political class, industry and communities around the terms by which environmental exploitation will take place.


These elements are as much the nature of scripted environmentalism today as they were in 2011. In fact, 2011’s version of state-sanctioned environmentalism, which was referred to as the “Colorado Model” by political and industry insiders, was and still is being exported nationally.

Nearly all environmental groups now work within this model. And now that the state is turning the corner on approving another 6,000 drilling permits, the “important” people are once again acting from a pre-2012 script. “The Colorado oil and gas wars are over,” is the new refrain of current Colorado Governor Jared Polis and Boulder Representative K.C. Becker. Unfortunately, it’s a line from a play about promoting the free flow of investment money and oil profits — not saving the environment.

There is deep political toxicity on the shale. The Boulder political class and its allies need to erase their long partnership and complicity with the oil and gas industry. That is why grassroots groups like East Boulder County United are so deeply opposed to what is happening. We are informed by history, educated by it, and must now act because of it. It’s my opinion that there’s no turning back for the Democrats or the rest of the world, Colorado included. The political class better get used to losing the narrative and make way for the people. The global environmental apocalypse is only going to make this battle far sharper.