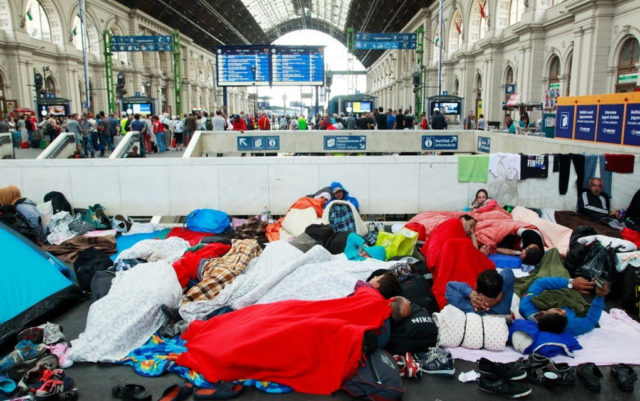 This executive order pauses refugee resettlement, grinding refugee processing to a halt. Each step of the refugee security check process is time sensitive, so suspending processing means that refugees will be pulled off of planes, families who are anticipating [the arrival of] their loved ones are devastated, and communities across the nation that have planned for refugees to arrive are left in limbo. This interruption forces refugees who were set to arrive in the United States today to wait months and even years to go through fingerprinting, interviews, health screenings and multiple security screenings yet again, all while their lives are in danger.

Among those impacted are Special Immigrant Visa (SIV) holders — Iraqis and Afghans who served the U.S. military as interpreters or otherwise supported the work of the U.S. government in Iraq and Afghanistan. These individuals, and their families, have been threatened and persecuted as a result of this service.

Jill Fricker, executive director of  Colorado African Organization (CAO), was reminded of the impact this decision has on our community right here in Colorado. “This morning I sat with a woman from Somalia who has been awaiting the arrival of her husband,” Fricker said. Her husband, also originally from Somalia, has been in a refugee camp in Uganda navigating the vetting process for the last two years. “Today she cried and asked me, ‘What will happen, will I see him again?’” Fricker added.

The executive order reduces the United States’ refugee admissions ceiling from 110,000 to 50,000 for federal fiscal year 2017, breaking the nation’s promise to refugees and abdicating the United States’ leadership role on human rights and refugee protection during a global refugee crisis of more than 21 million refugees.

Refugees are already subject to “extreme vetting.” In fact, they are the most heavily vetted individuals entering our country, going through biometric screening, multiple in-person interviews and a dozen additional security checks in a process that takes 18-36 months on average.

“We urge the new administration to quickly learn more about the existing process from the expertise in U.S. government agencies, specifically the Department of Homeland Security and Department of State,” said Jennifer Wilson, executive director of the International Rescue Committee in Denver. “Refugees are fleeing the violent extremism our country is trying to defeat. Shutting the door puts lives at risk and does nothing to make us safer. It further harms innocent people — mothers, daughters, fathers and sons — who are in need of a safe, peaceful and secure home where they are free from discrimination. It is irresponsible, immoral and un-American.”

“Providing a home for refugees has been at the core of what makes us Americans since our country’s founding,” said Paula Schriefer, president and CEO of Spring Institute. “We urge our members of Congress to restore policies in which refugees are not turned back because of their religious beliefs or because the countries they flee are particularly dangerous.”

“Since 1980, Colorado has welcomed nearly 70,000 refugees and other populations of humanitarian concern from countries all over the world. Our economy and community has benefited from the contributions of refugees, employers in all sectors have hired refugees, members of the community have volunteered their time to support them, and they have become full participants in our society,” said Frank Anello, director of Project Worthmore.

Colorado resettlement agencies, local organizations and refugee leaders stand with our refugee brothers and sisters, those who are in refugee camps and urban situations seeking protection, and those who are here and desperately waiting to be reunited with their family members overseas. The United States is a country of immigrants with a long, proud history of providing safe refuge for the world’s most vulnerable people fleeing conflict and persecution. We reject any action that undermines this tradition.

Organizations signing this statement are members of the Refugee Action Coalition of Colorado and include ECDC African Community Center, The International Rescue Committee in Denver, Spring Institute for Intercultural Learning and  Colorado African Organization.