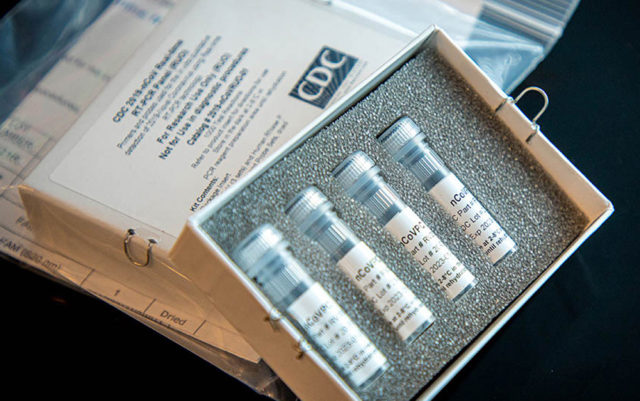 No more criticism. That was the message of U.S. Surgeon General Jerome Adams to journalists. He castigated them for their coverage of the White House response to the coronavirus pandemic. He said there should be “no more bickering, no more partisanship, no more criticism or finger-pointing. There’ll be plenty of time for that.”

The Washington Post’s Karen Tumulty tweeted, “Surgeon General admonishes reporters that they should not be holding government officials accountable for their actions. The real danger to the nation’s health is not to.”

This is after Trump claimed the pandemic was a “hoax” by the Democrats and the media. He has spread lies, misinformation and bullshit during this crisis.

Trump is a clear and present danger to our health. He is also a serious threat to democracy. Masha Gessen writes in The New Yorker: “The biggest gift the pandemic may give Trump is the opportunity to envelop an ever greater number of people in his reality. For the past three years, we have lived in a bifurcated America, where part of the population believes whatever Trump says, even when he lies about the weather, and the other part lives in the tension between observable facts and Trump’s lies. Staying sane in this split-screen reality is hard enough without the existential anxiety induced by a pandemic. Anxiety is ever the autocrat’s friend. Living in a fog where one either doesn’t know whom to believe or finds fact-based reality terrifying, more and more people may heed the clarion call of the conman-in-chief.”

As a Russian émigré who lived under Putin, Gessen knows what she is speaking about from experience. She says we have to discuss “how we live together in this country, which is a hard thing for Americans to do.  Our culture prizes individual action and privileges individual survival.”

It starts with Ronald Reagan who is beloved by Republicans whether they are Trump fans or Never Trumpers. Reagan said, “Government is not the solution to our problem. Government is the problem.” Right-wing strategist and lobbyist Grover Norquist proclaimed, “My goal is to cut government in half in 25 years, to get it down to the size where we can drown it in the bathtub.”

Actually Republicans and conservatives aren’t exactly anti-government. They fervently support the military industrial complex, harsh law enforcement policies and laws combatting what they consider to be moral breakdown. According to a study by Tufts University psychologists many years ago, the Democrats are the mommy party and the Republicans are the daddy party.

This is a rather sexist and authoritarian view of the family but it is somewhat useful.

David Paul Kuhn, writing in Real Clear Politics in 2010, explained: “…[T]he daddy party views government as a force for order. Government exists to prevent harm, whether to life or way of life. Washington is to structure politics, not improve society. … The mommy party views government as a means to feel safe. Washington provides a freedom from jeopardy to nurture citizens. Government is both safety net and springboard.”

This analysis is a little simplistic. A more useful narrative involves the rise of “neoliberal” economic policies throughout the world after the 1960s when world capitalism was in crisis. Right-wingers disagree with 20th-century political liberalism but are devotees of economic “neoliberalism.”

The big stars of “neoliberalism” are Reagan, British prime minister Margaret Thatcher and Chilean military dictator Augusto Pinochet. They wanted to remove government restraints on business no matter how much social damage this causes. They advocated for “free” trade, cutting public expenditures for social services, reducing government regulations that diminish profits, including protecting the environment and consumer and workplace safety. They wanted privatization of goods and services. They replace the concept of “the public good” with “individual responsibility.” But their promotion of rugged individualism only applied to ordinary folk. They fervently favored public subsidies and tax breaks for big business.

The first — and perhaps the purest — example of neoliberalism came in Chile in 1973 after a CIA-supported coup against the popularly elected government of Salvador Allende, who was a democratic socialist.

Neoliberal policies aren’t popular with the working class majority because they make everyday life more nasty and brutish. Reagan and Thatcher were somewhat constrained in carrying out neoliberal policies by opposition parties, labor unions and civil society groups who fought them in a democracy. Chile’s General Augusto Pinochet could do what he wanted. A milder neoliberalism was pursued by Democratic presidents Carter and Clinton.

Everything began to change with the global financial crisis of 2008. “The banks got bailed out! We got sold out!” Occupy Wall Street chanted. A far right arose with the Tea Party.

Is neoliberalism dead? Trump’s policies seem like neoliberalism on steroids. But he is a leader of a global faux right-wing populism which is quasi-fascist. If he is reelected, we won’t recognize our country.

Socialism has entered the mainstream. Bernie might not become the Democratic nominee, but exit polls after the primaries reveal that a majority of voters support Medicare for All and big, significant change.

The coronavirus pandemic is in its early stages and our gutted and dysfunctional federal government isn’t ready. Climate change is happening faster than the predictions of scientists. The world economy is stumbling.

It feels like the end times. If we want a better world, we have to fight for it.