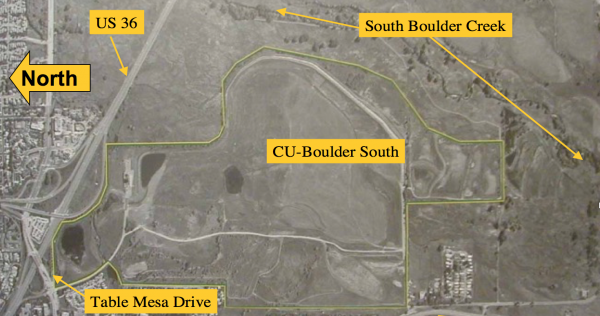 There’s a much better place for the University of Colorado Boulder to build its putative academic village than in the mined-out gravel pit at South Boulder Creek and U.S. 36 that it currently has its heart set on. And it’s just a few miles down the road.

At its height, StorageTek, which made tape and disk drives for mainframe computers, had several thousand people working at its production plant and headquarters in Louisville. However, the company became over-extended and was eventually sold to Sun Microsystems in 2005.

Two years later Sun vacated StorageTek’s Louisville campus. The abandoned plant was sold to ConocoPhillips in 2008 for around $55 million. ConocoPhillips intented to build a research campus and training center on the site, which it expected would eventually accommodate 7,000 employees.

In 2009, ConocoPhillips demolished more than a dozen empty StorageTek buildings on the site, but abandoned the project in 2012 following a corporate reorganization.

In 2017, California-based Bancroft Capital contracted to buy the property, which it saw as a potential site for Amazon’s second headquarters. But the deal never closed and on July 24 of this year the property was put back on the market. An SEC filing last year valued the property at $50 million.

By almost any metric, the StorageTek property is a more desirable site for CU expansion than the South Boulder Creek gravel pit (aka CU South).

1) Unlike the CU South property, the StorageTek property isn’t in a flood hazard area. That eliminates the risk of a bunch of CU students, faculty and staff drowning if The Big One hits on South Boulder Creek.

3) Although the CU South site is closer to the main campus than the StorageTek site, the StorageTek site has better access. CU South is accessed primarily at the Foothills Highway/Table Mesa Drive/U.S. 36 interchange chokepoint and secondarily from Highway 93 south of Boulder. If CU South is developed, major road and interchange upgrades at both entry points will likely be required. The StorageTek site is accessed from U.S. 36, from the Northwest Parkway and from 95th street out of Louisville. Superb access was one of the reasons the property was  offered to Amazon.

4) Development of the CU south site will require installation or expansion of water, sewer, gas and electric infrastructure. The StorageTek site is served by City of Louisville utilities, which are suitable for a business the size of StorageTek.

5) Then there’s the matter of future CU growth. CU’s ability to expand on the CU South site beyond its academic village is severely limited by the need for flood control and preserving natural areas. But if CU developed the academic village on the StorageTek site, it would still have about 300 acres left over for future development, an area roughly the size of the current Boulder campus.

In other words, acquiring the StorageTek site would give CU enough land to build a full-blown second campus.

Sound crazy? Think outside the box.

The biggest problem facing the University of Colorado in Boulder — and the City of Boulder — is that CU is outgrowing Boulder. That’s the main reason why it’s trying to develop CU South.

Sure, CU could pick up a few more acres between the main campus and Arapahoe — a lot of which is in the Boulder Creek floodplain — but beyond that, further expanding the campus in Boulder will do real damage to the city in terms of congestion, noise, crowding and destruction of existing neighborhoods.

Boulder has a highly limited ability to expand its road network, and the traffic in the city is rapidly approaching the “That’s All Folks” moment. By the same token, Boulder can’t increase its housing stock without turning into the sort of city that most people who live in the west will find claustrophobic.

And it isn’t just Boulder that’s being squeezed by CU’s growth. There’s been so much in-fill development on the campus that it’s becoming increasingly claustrophobic as well.

But CU doesn’t want to stop growing. So what’s to be done?

CU’s answer has been to build a second campus near the existing one, which is what CU South is about. But since CU has already decided that it’s OK to split the campus geographically by choosing to build a satellite campus on South Boulder Creek, why not build instead on a property that could accommodate a doubling of CU’s size, instead of one that is both constricted and inherently hazardous?

How might Louisville feel about this? In terms of physical impact, a CU campus on the StorageTek property would probably be about the same as StorageTek’s was or ConocoPhillips’ would have been. And there are a lot of advantages to having a university as your town’s largest employer. Once a university sets up shop in a community, it tends to be there for centuries. Which is more than can be said for a StorageTek or ConocoPhillips.