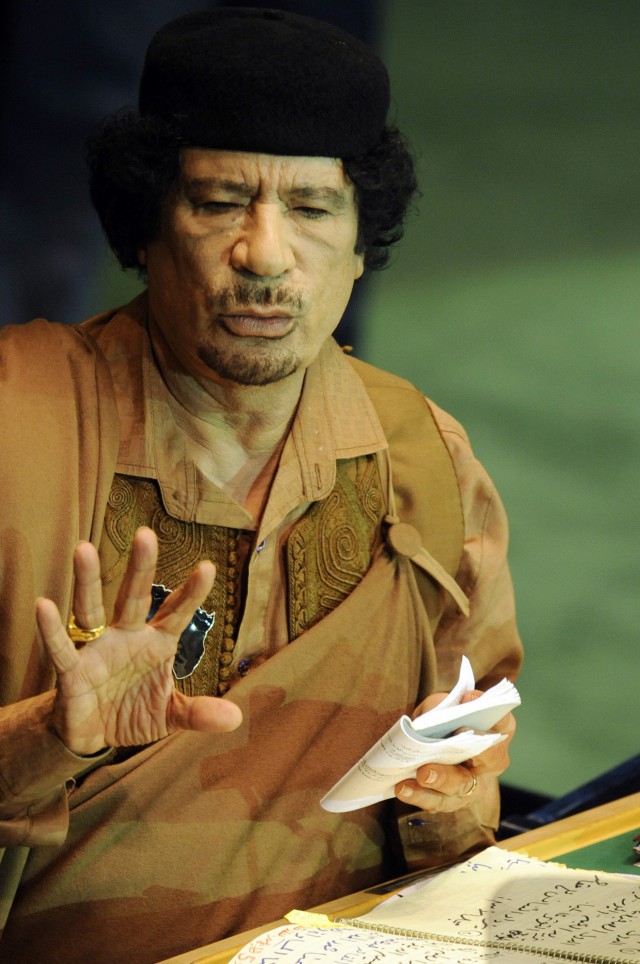 It’s the least you should do. If you want to keep Gaddafi from putting down the popular revolt in Libya and systematically murdering tens of thousands of Libyans — you do, don’t you — then ground his air force. And the simplest, most straight-forward, most bloodless way to ground his air force is to bomb the runways at the airbases that are still under Gaddafi’s control.

It isn’t that hard. You could do it by sending stealth bombers from the United States. It does not require moving an aircraft carrier battle group, welcome as that would be, or the cooperation of America’s cringing European allies. It probably doesn’t even require destroying Gaddafi’s obsolete and poorly maintained air defense system, contrary to what Secretary Gates said last week. Jamming it will likely suffice.

Grounding the Libyan air force will not guarantee the revolution’s victory, but it will vastly improve the revolution’s prospects of survival. And it will give Libya’s rebels a fighting chance of taking Gaddafi down. Bombing the runways would show the world that the United States is on the side of liberty — for once. It will kill few if any Libyans. And it will show the world you actually have a spine — which is really important at a time when the Middle East is on the knife’s edge between liberty and tyranny.

How to explain it to the world? Well, you could start by saying that in 1991 another American President (George H. W. Bush) allowed another homicidal megalomaniac (Saddam Hussein) to use the remnants of his air force to put down the popular uprising in Iraq that occurred after the first Gulf War and that Saddam then killed about 60,000 people — and that the United States doesn’t intend to repeat that mistake.

You might also remind the world that the “no-fly zones” that were subsequently established over northern and southern Iraq were put in place only after Saddam had filled hundreds of mass graves with Iraq’s Kurdish and Shiite rebels, and that such unconscionable tardiness won’t be repeated. And you might add that the best way to establish a no-fly zone is to ensure that the Libyan air force can’t get into the air to begin with.

Like I said, bombing the runways is the least you should do. But there are three other things you should do as well.

1. Blockade Tripoli and the other ports that remain in Gaddafi’s control.

2. Short of ordering combat air patrols to enforce a no-fly zone, put up a 24/7 patrol of Predator-type drones off the Libyan coast, which would blast any pro-Gaddafi troop columns that try to move against rebel-held cities.

3. Announce that no matter what happens, Gaddafi will not be allowed to reoccupy the parts of Libya his forces have lost. Period.

Doing these things might be enough to persuade Gaddafi’s remaining troops and allies to abandon him. There’s not much point in staying loyal to an aging dictator who’s in a no-win war.

Of course, what you should really do is land a few thousand Marines in Tripoli, arrest Gaddafi, lodge him in the Manuel Noriega Suite at Club Fed, and charge him with the bombing of Pan Am Flight 103.

And how to explain that to the world?

Say that mass murder of Americans isn’t covered by the statute of limitations, and that quite apart from the Libyan revolution, the USA has an account to settle with Gaddafi. And that this seems like a particularly opportune time to settle it.

In short, support the Libyan revolution.

What could possibly go wrong?

The two worst things that could go wrong in a post-Gaddafi Libya are that it could turn into either 1) another Somalia, or 2) another Iran. Both are real possibilities, but there are also good reasons why neither will happen.

Libya’s oil wealth may give rise to all sorts of evils, but oil and oil revenue also exert a powerful pull towards material and social modernity that isn’t present in a place like Somalia. Libya’s revolutionaries seem to be organizing provisional governments, not turning to warlords, as the Somalis have. That’s a good sign.

As for the danger of Libya turning into an Islamic republic like Iran, Libya’s revolutionaries have the best of reasons to avoid taking that path: They’ve been there.

It’s sometimes forgotten that Gaddafi was the region’s first modern Islamic revolutionary. Thus the green flag and Gaddafi’s little green book. Until Khomeini came along, he was the dean of Third World Islamic berserkers. Libyans are intimately familiar with tyranny in the guise of Islamic piety and misrule in the name of Allah.

They seem to be ready to give democracy a try, and we should give them a hand if they want it. Hope and change shouldn’t end at the water’s edge.