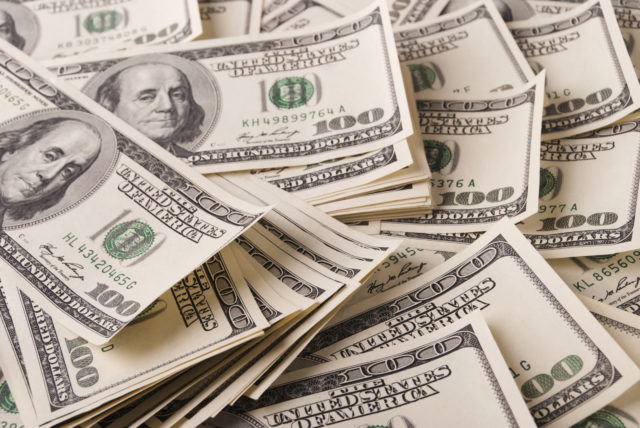 Money makes the world go ’round — and the coronavirus goes around with it.

Can the virus be spread by dirty money? According to CBS News, the short answer is yes… “The belief is that these viruses can stay on surfaces in their fully active states for at least 10 days. That includes cash and all kinds of other surfaces that people normally touch,” Dr. Sanjay Maggirwar, chair of the George Washington University School of Medicine’s department of microbiology, immunology and tropical medicine, told CBS’s MoneyWatch. “So certainly with the coronavirus, cash handling is a concern.”… The Federal Reserve is taking the threat seriously enough. Since Feb. 21, it has delayed processing cash repatriated from Asia for seven to 10 days before putting it back into circulation… Public health docs are advising people to use credit cards and to wash their hands after touching filthy lucre if they have to… Greenbacks get around fast, and tens of millions of people handle them every day… So how about sampling the money supply circulating in areas with coronavirus cases and announcing daily how contaminated it is?… And how about money laundering? Yeah it can be done, one site on the web suggested dry-ironing paper money at the highest temperature setting; another said Yankee dollars can be boiled… How about using a microwave to sanitize cash?… A woman in China tried it but ended up with charred bills in less than a minute… But there were numerous references on Google to using a microwave to sanitize kitchen sponges; two minutes will do it, they said…  Money to burn in China: Chinese banks are sanitizing bank notes with ultraviolet light — and burning the ones they consider too questionable or too numerous to try cleaning… One website suggested that if it’s too much hassle to launder your bills, you might try quarantining it for a couple of weeks before handling it again… And whatever you do, don’t pick your nose after hitting the enter key on the ATM machine…

The coronavirus is scary because there isn’t a vaccine and there isn’t a cure… A vaccine will be forthcoming in a year or two; the fact that it takes so long to develop vaccines for novel virus diseases that increasingly pop up out of nowhere is a major problem that needs to be addressed pronto… But the real failure of the global health care system is that there aren’t many, if any, good broad-spectrum antiviral drugs. And worse, that the world’s best antibiotics are losing their effectiveness as bacteria develop resistance to them. That matters with coronavirus cases, because a lot of the deaths are caused by patients contracting opportunistic bacterial infections… If anything good comes out of the COVID-19 pandemic, it would be a Manhattan Project/Moonshot program to develop them… And expediting the approval of new ones.

Coronavirus can’t hold a candle to the Spanish Flu epidemic of 1918-19, which killed anywhere from 50 to 100 million people worldwide, including more than 800,000 in the U.S. Here’s how the symptoms of an early group of victims, U.S. sailors who were stricken in Philadelphia, were described in the 2004 book The Great Influenza by John M. Barry:

“The blood that covered so many of them did not come from wounds… Most of the blood had come from nosebleeds. A few sailors had coughed the blood up. Others had bled from the ears. Some coughed so hard that autopsies would later show they had torn apart abdominal muscles and rib cartilage. And many of the men writhed in agony or delirium; nearly all those able to communicate complained of headache, as if someone were hammering a wedge into their skulls just behind the eyes, and body aches so intense they felt like bones breaking. A few were vomiting. Finally the skin of some of the sailors had turned unusual colors…”

In terms of total deaths, the Spanish Flu was the deadliest pandemic in human history. It scares the hell out of public health professionals to this day, and explains why they move so quickly to try and control the spread of viral diseases going viral.

About the stock market’s coronavirus fluctuations: Are the Wall Street guys a bunch of hair-triggered neurotics who start hyperventilating every time someone sneezes on the floor of the New York Stock Exchange, or are they just a bunch of cynical greed-heads who are deliberately creating panic selling so they can make a killing by shorting the market? Hey, short sellers never let a good panic go to waste…