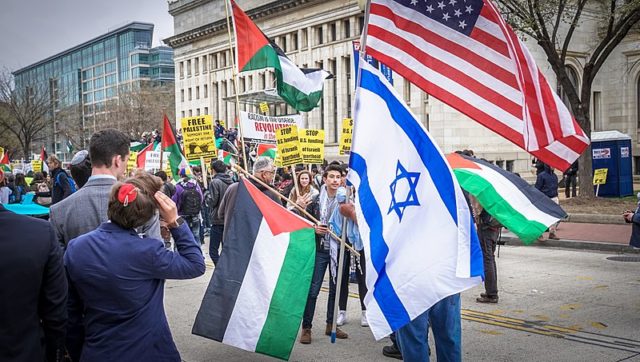 Whenever Hamas’s excitable boys in Gaza pick a fight with Israel — as they did in 2008, 2014 and this spring — it plays out the same way.

Hamas starts it by doing something that is considered an act of war when it occurs anywhere else in the world — like firing several thousand rockets at Israel civilian targets in 2008, or firing rockets and digging tunnels into Israel for use in terror attacks in 2014, or organizing lynch mobs to breach the border fence and kill or kidnap Israelis, which has been its shtick this year.

Israel responds with air strikes and ground attacks into Gaza, or in the more recent round, with sniper fire.

After a few days, Hamas starts yelping like a kicked dog about Israeli aggression, Israeli atrocities and civilian casualties.

Before long the international press joins in like a Greek chorus of velveteen anti-Semites, regurgitating Hamas’s lies and blood libels.

For the past two months this has taken the form of characterizing Hamas’s “right of return” marches in Gaza as grassroots civilian civil rights demonstrations that were “mostly peaceful,” and Israel’s response to them — with sniper fire and tear gas — as a “disproportionate use of force” against “innocent civilians.”

The marchers are not peaceful. Nor are they intended to be.

If there’s any doubt on this point, consider how Hamas leader Yahya Sinwar described what they were intended to do in a pep talk he gave to some of the marchers April 6: “We will take down the border, and we will tear out their hearts from their bodies.” He also called on the marchers to “eat their livers.” (“Eat their livers,” huh? As we Jews are wont to reply: “Who do you think we are, asshole? Chopped liver? Tell it to the snipers.”)

And on May 13, in an interview with Al Jazeera, Mahmoud Al-Zahar, one of the founders of Hamas, brightly added: “When we talk of peaceful resistance, we are deceiving the public.”

One Hamas Facebook page urged marchers to bring knives and cleavers to the demonstrations and hide them under their clothes.

In an article at the website frontpagemag.com, Daniel Greenfield sarcastically and succinctly described one of the demonstrations, or more plainly riots, like this:

“Hamas supporters in Gaza held the world’s first peaceful protest with hand grenades, pipe bombs, cleavers, and guns. Ten explosive devices were peacefully detonated. There were outbursts of peaceful gunfire and over a dozen kites carrying firebombs were sent into Israel where they started 23 peaceful fires. And Israeli soldiers peacefully defended their country leaving multiple Hamas attackers at peace.”

Nor was participation in the marches exactly the spontaneous uprising of the wretched of the Earth that most of the international media has been trying to portray it as.

According to a report in early April from the Middle East correspondent for the U.K. paper The Telegraph, marchers were paid $100 for showing up, $200 if they were shot and $500 for being severely injured. Families of the dead got $3,000.

The international media frequently reported that Israeli snipers were shooting innocent, unarmed civilians. That narrative fell apart on May 16, when a senior Hamas official named Salah Bardawil told a Palestinian TV station that 50 of 62 rioters killed on May 14 were members of Hamas.

But what of the 2,000 or so marchers who have been wounded by Israeli snipers, usually by being shot in the legs? Surely they were unarmed innocent civilians.

Whatever else the Hamas marches may have accomplished, they have raised, once again, a question the international press prefers not to ask of militants who, in Mao’s phrase, consider themselves entitled to “move amongst the people as a fish swims in the sea,” even when the fish might prefer that they were in someone else’s shoal.

The question is “who’s a civilian?”

The Great March of Return casualties were civilians, at least to the extent of not wearing uniforms; a lot of militants fight in T-shirts, Levis and chinos. But the “innocent” part is another matter.

“Innocent” means, at a minimum, uninvolved. The Gaza protesters stormed an international border (Israel’s), which they do not recognize, with the intent of challenging the sovereignty of the country on the other side (Israel), whose existence they don’t recognize. That may be many things, but “uninvolved” isn’t one of them.

Indeed, violating an international border with the intent of challenging the sovereignty and existence of the country on the other side is an act of war.

A civilian who engages in such an act can be variously characterized as a rioter, a rebel, a partisan, a revolutionary, a non-uniformed militiaman, a non-uniformed combatant, a complicit civilian, a civilian combatant, or some other category of irregular forces. But they are not innocent bystanders, and to suggest they are is to reject reality.

The fact that the international press continues to portray the ones in Gaza as innocents and libel Israel for defending itself against the acts of war perpetrated by them raises two other questions: 1) Who’s a journalist?, and 2) Who’s an anti-Semite?