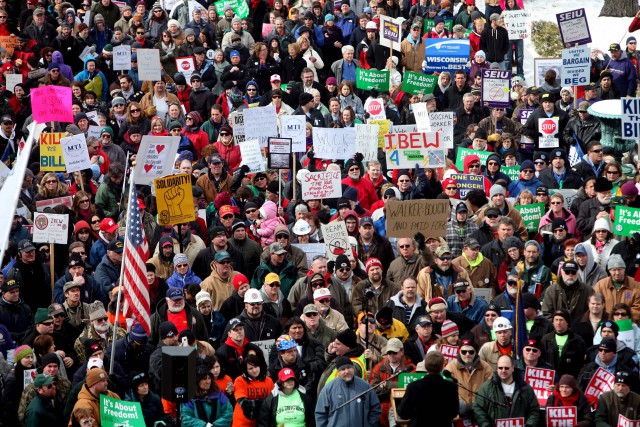 The protests that have been sweeping the Middle East for the past month spread to the Middle West last week.

Mass rallies were staged in Wisconsin, with similar protests spreading to Ohio, Michigan and Minnesota. Organizers used social media to turn out the demonstrators. That, however, is where the similarity to Egypt and other Middle Eastern countries ends. Unlike the demonstrators in the Middle East, who were demanding change, the demonstrators in the Midwest were defending the status quo. And unlike the Middle Eastern demos, which were largely spontaneous, bottom- up affairs, the Middle Western protests represent revolution (or counter-revolution, as the case may be) from above. The Middle Western demonstrations were organized by public employee unions that object to legislation being considered by the Wisconsin legislature that would require public employees to pay part of the cost of their pension plans and health insurance and which would sharply restrict the unions’ collective bargaining leverage. It would limit collective bargaining for most state and local government employees to issues of wages and exclude pensions and health care. It would also require government workers to contribute 5.8 percent of their pay to pensions (they currently pay little or nothing) and raise their contribution to their health insurance premiums to 12.6 percent, up from 6 percent.

It would also end the practice of the state collecting monthly dues for the unions by deducting them from employees’ pay, and it would require annual recertification elections for the unions.

The demonstrators are getting active support from the AFL-CIO and from the Democratic National Committee’s Organizing for America arm, which was formed from the remnants of the Obama campaign organization. (They also have the vocal and unreserved support of Obama — which is more than can be said for pro-democracy demonstrators in the Middle East).

Politically, this is a bad fight for unions and Democrats to pick. Public employees are no longer church mice — the average Wisconsin teacher’s pay and benefits package comes to $87,000 — and the American people know it. In places like Wisconsin, most government employees make more than people doing the same work in the private sector and have much better benefits, as well.

And they have job security, which counts for a lot these days.

But politically smart or not, organized labor has decided it has to go to the mat in Wisconsin, and its reasons are clear enough.

Public employee unions are the only part
of the labor movement where union membership has shown any vitality in
recent years. Indeed, more than half of current union members in the
United States work for government.

Only 6.9 percent of workers in the private sector belong to unions; in the public sector 36.2 percent do.

As
for the Obama administration and the Democratic National Committee,
well, in 2008 organized labor contributed $400 million to the campaigns
of Obama and other Democrats. Take away organized labor, and half the
blue states turn red. Solidarity forever, baby.

But
in spite of all that, this is still a losing proposition for labor and
the Dems, because state governments are facing an existential threat of
their own. They are headed at warp speed for a financial cliff, to the
horror of most of their residents. State governments are expected to run
up deficits totaling $125 billion this year. And unlike a lot of Middle
Eastern states, Middle Western states
don’t have much in the way of oil. That goes far toward explaining why
voters installed Republicans in statehouses all over the Midwest (except
Illinois) last year. Those governors and legislators were elected on
platforms of balancing state budgets and not raising taxes. Wisconsin
Gov. Scott Walker explicitly campaigned on reining in unions. Wisconsin
voters knew what they were getting.

Labor
is taking on governors and lawmakers who have a mandate from the voters
to do what it takes to get the cost of government under control,
including taking on public employee unions. That’s not the same as
taking on GM.

I
think the situation resembles not the Air Traffic Controllers’ strike of
1981 (Reagan sacked them for an illegal walkout and rode out the
storm), but Margaret Thatcher’s 1984 fight with the British coal miners
union over closing unprofitable mines and privatizing the rest. The
strike went on for a year, after which the union capitulated. British
unions have never really recovered. The coal miners had a lot of public
sympathy then (more than U.S. public employee unions have now), but
people also recognized that the status quo was intolerable.