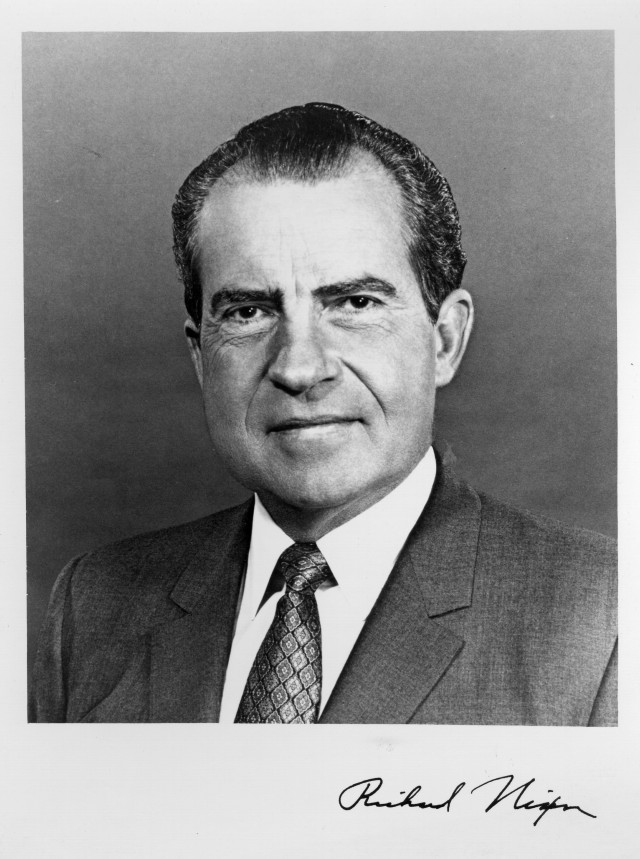 I was just kicking back with my second piece of Alice B. Toklas fudge when there was a knock on the door. It was Richard Nixon.

“I thought you were in Purgatory,” I said. “Bill Safire used to say you were there for sticking the country with wage and price controls in 1971.”

“Tomorrow [ June 17] is the 39th anniversary of the Watergate burglary, and we’re having a reunion.”

“Watergate wasn’t exactly one of your bigger successes,” I said.

“Compared to the war on drugs it was a howling, screaming, foot-stomping success,” he said. “At least the Watergate break-in had a real chance of success. It was just happenstance and bad luck that we got caught. The drug war was a loser from day one. I knew it was going to fail.”

“You knew it was going to fail?’ I asked incredulously.

“Of course I knew it was going to fail,” he said impatiently. “I grew up doing the prohibition, and I knew how that ended. It didn’t take a genius to see the parallels. I may be an (expletive deleted), but I am not a fool.”

“Well, if you knew the drug war was going to fail, why did you start it in the first place?” I asked.

“To stick it to the people who were attacking my administration — specifically the young, the poor and blacks,” he said.

“Let me make one thing perfectly clear — that’s not new news,” he continued. “A few years before he died, John Ehrlichman was interviewed by a former Wall Street Journal reporter named Dan Baum, who was writing a book on the drug war. John told him, and I quote: ‘Look, we understood we couldn’t make it illegal to be young or poor or black in the United States, but we could criminalize their common pleasure. We understood that drugs were not the health problem we were making them out to be, but it was such a perfect issue for the Nixon White House we couldn’t resist it.’

“And we didn’t,” he concluded triumphantly.

“Wow,” I said. “Criminalizing people’s pleasures as a way to get at them politically — you guys really were a bunch of flaming (expletives deleted).”

“Politics ain’t bean-ball, bubby,” he retorted. “You should know that much from your own modest career.”

“OK, you have a point there,” I conceded. “Still, do you have any regrets?” “Well, I regret the $1 trillion — probably $2 trillion if inflation is taken  into account — that federal, state and local governments poured down the drug war rat-hole with nothing to show for it. The money could have gone for a lot of things, including a tax cut.

“And I regret the mess the drug war made internationally. It’s not just the drug cartels that are turning Mexico into a failed state, although that’s bad enough. By making drugs illegal, we unintentionally created an endless, readily available, independent funding source for every revolutionary movement on the planet that chooses to use it. Like the Taliban in Afghanistan, the Shining Path in Peru, the FARC in Colombia, the Contras in Nicaragua, and now al Qaida all did.

“But most of all, I regret what the drug war did to trust in America. I know you think old Tricky Dick is the last person on earth or under it who should be lecturing you on trust, but, as Reagan said, facts are stubborn things. Urine testing in the workplace, sniffer dogs in the schools, kids turning in their parents — the drug war has been poisoning human relationships in America for a generation. I didn’t anticipate that, but I should have.

“But I don’t regret frog marching a couple million Democratic voters into jail,” he added. “I hated them as much as they hated me. Screw them. But it’s surprising the Democratic Party has never raised a stink about it. Go figure.”

“So what should Obama do about the drug war?” I asked.

“If I were Obama, I’d go to China — metaphorically, that is.” he said.

“I would break with the past and proclaim the drug war a failure and a luxury we can no longer afford. Then I would cut its funding and introduce legislation ending federal drug prohibition and leaving drug control to the states — in effect giving them permission to legalize and regulate drugs as they see fit. At least I would do that with marijuana, which represents 80 percent of drug use and isn’t any more harmful than beer. That’s how we got out of prohibition.”

“Wouldn’t that be political suicide for Obama?” I asked.

“Not at all,” he said. “The country is currently split down the middle on legalizing pot, and most of the people who are strongly against it would never vote for Obama anyway. He wouldn’t lose many votes that he hasn’t already lost. Chances are he would energize his base. If he made legalization an issue, it’s the Republicans who would be on the spot; it could easily split off their libertarian wing.”