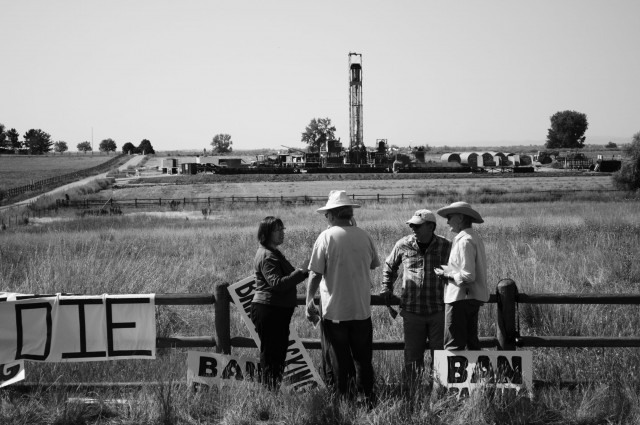 The anti-fracking activists who demonstrated at an oil rig on Boulder County open space last Saturday obviously don’t think fracking is very dangerous. How else do you explain the fact that they brought their kids to the demonstration?

The demonstration was staged at the 140-acre Wambsganss Open Space property, which is south of Niwot Road and northeast of Panama Reservoir No.1, less than a mile from the Boulder-Weld county line.

Encana Oil and Gas Inc. is drilling five wells on the site. The wells will be directionally or horizontally drilled from a single pad — the well-heads will be 10 feet apart — and fracked. The actual drill site, which has an existing well on it, covers about three acres.

According to the Camera, about 30 people showed up to demonstrate on Saturday morning. At least 10 children were present, including a 1-year-old.

“We’re trying to get the word out to people to alert them to the dangers of fracking,” said Karen Conduff, one of the demonstrators.

“We feel that it [fracking] causes harm to our health,” said Diana Caile, a member of The Mothers Project. “It causes water contamination, air pollution, contaminates the soil … and that this is a heavy industrial, toxic process that does not belong in our community.”

Cliff Willmeng, a member of East Boulder County United, characterized Encana’s project as “drilling five holes into the earth and injecting it with 50 million gallons of industrial waste.”

Cyndi Nusbaum, another one of the demonstrators, said she was “worried about the wildlife, worried about the water issue. Quite a bit of it is going to be turned into toxic waste never to be returned to the cycle of life again. It’s really upsetting, and a lot of people are going to get sick. I really think they will.”

Wow. Given that laundry list of supposed eco-evils, you would have to be nuts to allow your kids to get anywhere near the well site.

In addition, seven school children from Earth Guardians Youth for Global Sustainability participated in the demonstration (one was aged 12; the rest looked 10 or younger, judging from a news photo).

It should come as no surprise to anyone who has been reading my stuff for the last couple of years that I don’t have much respect for anti-fracking activists. And I’ve never been much impressed by folks who use their kids as political props — not withstanding the fact that that there is a long tradition of doing it in Boulder County, from liberals and conservatives alike.

But that said, I don’t believe for a second that any of the folks at that demonstration would have brought their kids to the Encana well site if they had the slightest misgiving about their children’s safety.

And as a result, I don’t think the demonstrators really believe their own hyper-ventilating rhetoric.

Drilling for oil is not a pollution-free undertaking, but as industrial processes go, it is a lot more benign than many — like making the paper bags that are used at Whole Foods, for example. Properly drilled wells — and most wells are — may not be kid-friendly, but they are not the toxic menace the activists are trying to make them out to be. And while the activists may not admit it, even to themselves, at some level they intuitively know that. Otherwise they would have left their kids at home.

I suspect the protesters’ core concern was not public health or environment protection, but anti-corporatism and anti-capitalism, which has always been an integral part of the peace and justice/ Occupy Wall Street activists’ agenda.

One of the child activists gave the game away. Xiuhtezcatl Martinez, a 12-year-old member of Earth Guardians Youth for Global Sustainability, said, “I think it is really, really sad that people would line their pockets” with the sales of oil and gas produced by such wells (as the ones Encana is drilling) “at the cost of our future.”

Personally, I don’t think there is anything wrong with people lining their pockets by producing and selling oil and gas, which are indispensable to the continued functioning of what passes for civilization on this planet — even if their customers include a bunch of self-righteous fools who (according to the Camera) drove their cars to a demonstration against an oil company.

I do think it is really, really sad that a young girl has been taught to parrot a Marxist blood libel of an industry that is providing the products — oil and natural gas — that are absolutely essential to maintaining both the lifestyle and the health, safety and welfare of 300 million Americans, including her own and her family’s — now and in the future.