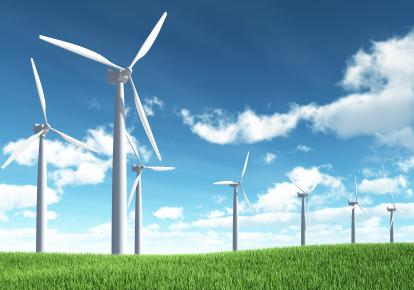 Heh. According to a paper published in the latest issue of the journal Nature Climate Change, windmills can cause global warming.

Well, what the study actually found was that the surface temperature around wind farms in west-central Texas had increased by about 1.3 degrees Fahrenheit over a decade compared with the area around them, and that the rate of increase closely tracked the installation of additional turbines at the farms.

The study, which was conducted by Research Associate Professor Liming Zhou and colleagues at the University at Albany, State University of New York, analyzed temperature readings taken from NASA satellites from 2003 to 2011.

The study area contains four of the world’s largest wind farms. During the period of the study the number of wind turbines in Texas grew from 111 to 2,358.

“Typically at night, there’s a stable atmosphere with a warm layer overlying a cool layer,” Zhou said. “Enhanced vertical mixing [caused by the wind turbines] brings warm air down and cold air up, leading to a warming near the surface at night.”

But that has never stopped the few surviving ink-stained wretches of the world from jumping to conclusions at moments such as this.

I’d like to jump to a couple now. The important finding here from a public policy perspective is that windmills have environmental impacts big enough to be noticed from outer space — especially when they’re bunched up — and that those impacts will grow as wind farms expand and proliferate.

One of the principal arguments for wind energy is that, apart from some aerial road kill, it comes with minimal environmental impacts.

Zhou’s study strongly suggests that isn’t the case, and that a technology that’s subsidized because it will slow global warming in the future is, in fact, producing local climate warming in the present.

And the term “local climate” can cover a lot of ground in the context of a wind farm. The Horse Hollow Wind Energy Center, which has 735 megawatts of installed capacity (421 turbines) is spread over 47,000 acres, an area about 1 1/2 times the size of the Boulder Valley.

What’s more, unlike say forest fires or oil spills, which are transitory events that can be remediated, the wind farm warming effect will occur for as long as the wind farm operates.

According to the American Wind Energy Association’s annual report, as of the end of 2011 there were 46,916 megawatts of installed wind generating capacity in the U.S. But because wind is an intermittent energy source, wind accounted for only about 3 percent of U.S. electrical output.

If wind is to produce 20 percent of the country’s electricity, a goal of wind advocates, that generating capacity will have to be increased by at least a factor of seven. Meeting that goal will require more and bigger wind farms. If they are concentrated in areas with the best wind resources, like the Texas Panhandle, a local warming problem could easily turn into a regional problem. And become more pronounced, of course.

Conclusion: Maybe environmentalists shouldn’t get so damned holy about wind power as an alternative to all fossil and nuclear fuels. When it comes to anthropomorphic global warming, miners and oilmen aren’t the only ones with dirty hands.

The real question is whether the Zhou Effect (if we can call it that this soon) is a bug or a feature.

Unlike the effect of greenhouse gas increases, which take decades to manifest themselves (and centuries to go away), the Zhou effect turns on and off like a light-switch.

Overall, the world may be warming, but there are places in it where warming up the local environment might be considered a solution instead of a problem.

The Texas panhandle, which has been going through a horrendous drought for the last few years, probably isn’t one of them. Minnesota, which is a major wind energy state and where water isn’t much of a problem (10,000 lakes, you know), is another matter.

If the Zhou Effect could result in a longer growing season around wind farms, then that could trump the higher summer temperatures it causes — especially since the effect could be shut off by idling wind turbines during heat waves, if necessary.

According to Professor Steven Sherwood of the University of New South Wales, citrus growers sometimes use helicopters to combat early morning frosts by mixing the warm and cold air layers above their orchards; wind turbines are doing the same thing. Come to think of it, they grow a lot of grapefruit in Texas.

Conclusion: Think globally, and fry locally — but that may be a good thing.