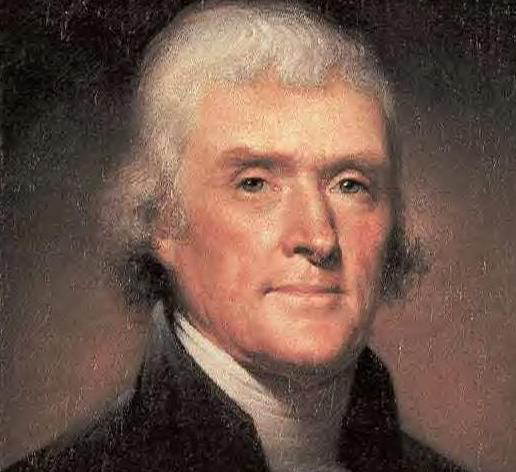 Dick Nixon and I were finishing off the Alice B. Toklas fudge when there was a knock on the door. It was Thomas Jefferson.

“Have some fudge and a cool one.”

“Don’t mind if I do,” he said, as he popped a piece in his mouth. “Rebellion to tyrants is obedience to god.”

His eye fell on Nixon. “Richard, what are you doing here?

Bill Safire told me you were in purgatory for sticking the country with wage and price controls in 1971 — and for starting the war on drugs, of course.”

“They let me out on a pass to attend the Watergate reunion,” Nixon replied. “They said I could stay through the Fourth.”

“I always come down a few days before the Fourth of July and stay for the fireworks. It’s an opportunity to chat about the state of the republic and of liberty.”

“We were just doing that ourselves,” I said.

“And what specifically are you talking about?” he asked. “We were discussing gay marriage,” I said. “How do you feel about it?” “There you go again!” he exploded.

“That’s all you latter-day newspaper men ever ask me — how do I feel about things. Why don’t you ever ask ‘What do I think?’ What’s wrong with you people? Did the age of reason pass you by?” He sighed heavily. “Very well, I’ll tell you how I feel about gay marriage. Like a lot of things in your age, I find the whole concept bizarre, disturbing, self-indulgent and somewhat disgusting — I’m an 18th-century man, for god’s sake.

Now let me tell you what I think about gay marriage. I think the question of gay marriage is entirely uninteresting and unworthy of serious discussion — because the answer is self-evident: Gays have an unalienable right to wed each other if they so choose.”

‘We hold these Truths to be self-evident, that all Men are created equal, that they are endowed by their Creator with certain unalienable rights, that among these are Life, Liberty, and the Pursuit of Happiness — That to secure these Rights, Governments are instituted among Men, deriving their just Powers from the Consent of the Governed, that whenever any Form of Government becomes destructive of these Ends, it is the Right of the People to alter or to abolish it, and to institute new Government, laying its Foundation on such Principles, and organizing its Powers in such Form, as would seem most likely to effect their Safety and Happiness.’ “Every thought in that sentence is a radical idea of world-shaking proportions. And the most radical of them all is the phrase ‘pursuit of happiness’.

“Spoken like a lawyer, and a shyster lawyer at that,” T.J. retorted. “I am painfully aware that the phrase ‘the pursuit of happiness’ does not appear in the Constitution. As I said, it is the most radical phrase in the most radical sentence in the most radical document. My fellow founders concluded it was too radical a thought to be included. But that is beside the point. The essential point is that the pursuit of happiness is self-evidently an unalienable right. It cannot be taken from you by man or government; to even attempt do so would be a crime against nature and nature’s god. If gays choose to pursue their happiness by marrying their partners, that’s their business and theirs alone,” he said.

He looked directly at Nixon.

“Richard, your political party spends a lot of time talking about American exceptionalism. Well the proposition that all men — and all women; you latter-day patriots got that much right — that every member of our species has an unalienable right to pursue happiness is our most exceptional idea.”

“The Bible says gay love is an abomination,” Nixon protested.

T.J. snorted. “Ah yes, the Bible. It says that in the book of Leviticus. Earlier it says eating pigs and working on Saturdays are abominations, but I’ll bet you don’t let that stand between you and a platter of bacon and eggs on Saturday morning. As long as you’re reading Scripture selectively, why don’t you ignore the parts that are hateful to several million of your neighbors and fellow citizens, and not just the parts that interfere with your breakfast?

“Not that there’s anything wrong with reading the Bible selectively,” he continued. “I once took a razor and edited the New Testament with it. I cut away all the myth, superstition, hate and humbug, leaving only the life and pure moral teachings of Jesus. There wasn’t much left, fewer than 100 pages.

“But to return to gay marriage, just as the phrase ‘the pursuit of happiness’ doesn’t appear in the Constitution, neither does the word ‘marriage.’ But that doesn’t mean they aren’t unalienable rights, and it doesn’t absolve government of the duty to secure them. Securing unalienable rights is the raison d’être of government, as I said in the Declaration.

“Marriage is a contract,” he went on, “and governments have a duty to enforce contracts — and to enforce them in such a way that they are consistent with and respectful of the unalienable rights of the contracting parties. If a marriage contract is perverted into an instrument of tyranny, oppression and abuse, then government has a duty to intervene.”

He paused and appeared reflective. “You know, I hadn’t thought of this before, but given the tyrannous and abusive way Sharia law treats women, there is probably a stronger case to be made for banning Islamic marriage than there is for banning gay marriage. Perhaps I should take a razor to the Koran someday.”