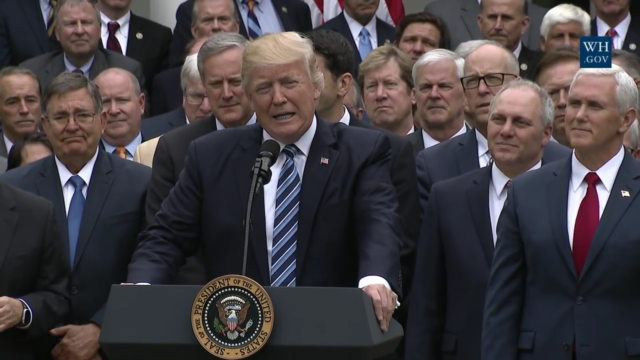 Don’t be surprised if Trump gets himself a bust of Ulysses Grant to go with the bust of Andrew Jackson he keeps in the Oval Office. And maybe one of Margaret Thatcher, too.

At the height of the Battle of Spotsylvania Court House, one of the bloodiest and most violent battles of the Civil War (in mid-May 1864) Grant wrote to Lincoln that he intended “to fight it out on this line if it takes all summer.” In the end it took him 11 months to finish off Lee and the Confederacy, but he never let up.

Thatcher’s greatest domestic fight was over the power of the British labor movement. The “line” she fought it out on was a confrontation with British coal miners over the closure of money-losing mines and the privatization of Britian’s nationalized coal industry. It took her a year, during which she hemorrhaged support in the polls, but she won — and won re-election two years later.

When it comes to the current partial government shutdown, I think Trump is thinking in terms of a Grant/Thatcher sort of timeline — a confrontation that could go on for months, not the days or at most weeks that Pelosi, Schumer, and the right coast press anticipate.

Pelosi and Schumer think the current shutdown will play out the way previous ones did — with the party responsible for it caving after a couple of weeks.

The Democrats think Trump will cave on the shutdown as political pressure builds. Apart from the fact that it doesn’t seem to be building much except inside the Beltway, the Democrats are missing the fact that Trump doesn’t view the current shutdown trough the same political lens they do.

Most previous shutdowns were about money. When the issue is money it’s relatively easy to fashion compromises. But this shutdown is different. In this shutdown money is secondary. This one is about core values and worldview.

Trump is looking at it the same way Margaret Thatcher looked at her fight with the coal miners’ union — a political struggle that must be won, even if it has to be fought out on the same battle-line all summer or all year or the next election, polling and torpedoes be damned.

The most important thing to know about Donald Trump is that his first political priority is keeping his promises. I think it became his first priority during the 2016 campaign when he started campaigning in flyover country and discovered that people out there were not only taking him seriously and treating his ideas with respect, but were putting their hopes and aspirations in his hands. Chances are that never happened to him before. And when it did, he forged the sort of political bond and social contract with the people who make up his base that’s transformative to a candidate.

As a result he will fight to deliver the wall regardless of what the polls say and how much caterwauling and snark is pumped out by the Beltway insiders and media.

The Washington press corps has been telling us for months how energized the Democratic base is. Fair enough, but Trump’s stand is energizing both the Republicans and the latter day Reagan Democrats he’s brought into the Republican tent as well. The wall was his premier promise in the campaign. If he caves on it he will lose his base, and he knows it.

Trump won by being Bullworth, the fictional politician in the film of the same name who suddenly started saying exactly what he thought, and by being the political incarnation of the honey badger, the critter who comes on relentlessly and never quits, even when ankle deep in vipers. Kinda’ like Grant and Thatcher.

Trump has another advantage in this fight as well: The American people are rapidly getting their fill of the Democrats’ political correctness and identity politics. They’ve called so many people racists and sexists that the slurs are losing their power to intimidate, let alone persuade.

Schumer and Pelosi didn’t do themselves any favors with their televised rebuttal to Trump’s speech on Tuesday, Jan. 8. They looked like they had been made up by a just-OK embalmer, and so did their narrative. They talked process and lost the process argument. Trump talked values and won the values argument. He won it with one thought: People don’t build walls around their homes because they hate the people outside; they build them because they love the people inside.

It’s telling that the Democrats’ narrative has focused almost exclusively on the shutdown and what it’s doing to the affected government workers and the services they provide. They don’t want to talk about the thing Trump shut down the government over — border security and the wall. That’s because the deeper one goes into the Democrats’ approach to immigration the more disingenuous it appears.

Schumer called Trump’s speech on the border wall a tantrum. That’s pretty rich coming from the leader of a party that rebranded itself as the resistance (instead of the loyal opposition) the day after the 2016 election. The Democrats have been throwing a non-stop tantrum ever since. And now Schumer has the chutzpah to claim Trump is throwing a tantrum because he’s playing by their rules. As they do say in Washington, what goes around comes around.