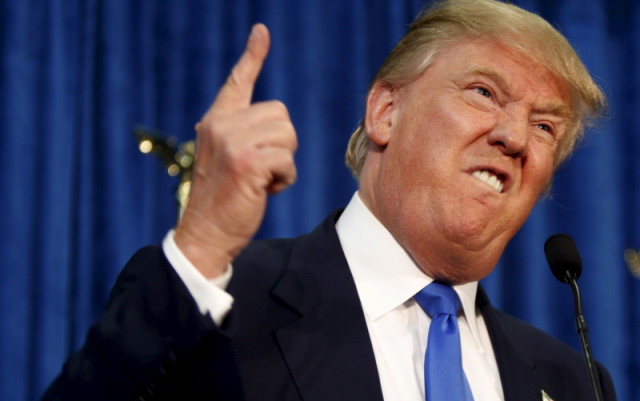 Well, Mr. Trump, how’s that Canadian stuff working out for ya?
Not so much, eh?

When Donald Trump attempted to question whether Ted Cruz was a “natural born citizen” — Cruz was born in Calgary to an American mother — Cruz’s initial response was to post the video from the old Happy Days TV show of Fonzie jumping the shark.

Judging by what happened in Iowa on Monday the jumping the shark metaphor was prescient. Playing the citizenship card was the moment the Trump campaign began to stall.

Trump’s attack on Cruz’s citizenship was a disingenuous act of character assassination that ended up raising more questions about Trump’s character, and intellectual honesty, than Cruz’s.

It didn’t blow up in Trump’s face — he actually pulled ahead of Cruz in Iowa polling after he played the Canadian card — but it caused a lot of voters to start looking at him critically and having doubts about what they saw.

Cruz responded by accusing Trump of having “New York values,” by which he meant Trump was no conservative. Trump had a strong riposte in the sixth Republican debate on Jan. 15, but the charge stuck. What a lot of undecided Iowa voters saw once they started looking at Trump critically — and more than a third of them were undecided three days before the caucuses — was that Trump had a couple of “New York values” Cruz had neglected to mention: rudeness and arrogance.

At the very least, this kept Trump, the supposed master of the art of the deal, from closing the deal in a timely manner. And that proved deadly.

Trump’s last opportunity to close the deal was the Jan. 28 Republican debate in Des Moines, sponsored by Fox News. But he picked a fight with Fox over whether Megyn Kelly — who played hard-ball with him in the first Republican debate — would be one of the moderators and dropped out after Fox refused to drop her.

That was a costly mistake, not so much because it appeared arrogant (which it was), but because it gave Cruz and Rubio a chance to strut their stuff (which they did). Cruz had a solid performance, Rubio had a breakthrough one, and Trump lost the initiative.

As usual with matters Trumpian, the national press corps couldn’t quite believe what it was seeing. Trump was making amateur mistakes in Iowa. He had failed to build a grass-roots campaign organization, even though he knew Cruz had built a superb one. He was taking his supporters for granted (like when he said he could go out on Fifth Avenue and shoot someone and it wouldn’t cost him any votes) and treated them cavalierly (like when he called the people of Iowa stupid). Worst of all, when Cruz challenged his conservative credentials, he didn’t answer effectively.

But the press, focusing on the dozen or so polls that showed Trump in the lead in the days before the caucuses, concluded the only thing that could stop him was if there was a low turnout by his supporters on caucus night — choosing to ignore the huge number of undecided voters who in poll after poll kept on not deciding, an obvious bad sign for a supposed frontrunner.

More than 180,000 showed up at the Republican caucuses (the old record was 121,000), including scads of first-time attendees, who were supposed to favor Trump. The late deciders showed up in force — and opted mostly for Rubio (31 percent) and Cruz (27 percent). Trump got 13 percent.

Citizen Cruz got 51,649 votes, more votes than anyone in the history of Iowa caucuses in either party. Trump finished second with 45,416. Rubio finished third with 43,132.
Trump managed a reasonably gracious speech thanking his supporters and split for New Hampshire, where he has a big lead in the polls.

A lot of reporters were treating Rubio as if he had won, because he had exceeded (the press’) expectations. And the treatment was not entirely undeserved. Rubio delivered a genuinely stellar victory speech, some of it reminiscent of JFK at his best. Rubio has clearly come to play.

Cruz’s victory speech, like the candidate, was a lot flintier and more explicitly political than Rubio’s. I thought the most interesting part was when he directly reached out to Reagan Democrats (“Your party has left you. And the Republican Party wants you. We welcome you back.”) and asked them to join in driving “the liberal elites and the Washington cartel into the Potomac and out to sea never to be seen again.”

What made that red meat passage particularly interesting (apart from the fact that Reagan Democrats are a big part of Trump supporters) was that over at Clinton headquarters, Hillary was doubling down on her call for gun control — the issue that has cost the Democrats dozens of congressional seats in districts dominated by Reagan Democrats. At a time when Cruz was inviting Reagan Democrats into the Republican tent, Hillary was in effect telling them they were unwelcome in the Democratic Party.

As for Trump, it’s too early to write his political obituary (again), but I think he was hurt by his Iowa loss more severely than the reporters in Iowa were prepared to say. The most damaging aspect of the loss was not that the candidate who calls all his rivals losers has lost his first cage match. Much of Trump’s success flows from the fact that he has had seven months of non-stop earned media, which marginalized coverage of the other Republican candidates.

The press couldn’t help itself. As the self-appointed arbiters of political correctness, the press had a voyeuristic obsession with the most politically incorrect presidential candidate since George Wallace.

That game is almost certainly over now. Trump is going to have to share the spotlight with Cruz and Rubio, and chances are they will juse the opportunity to rip his hide off.