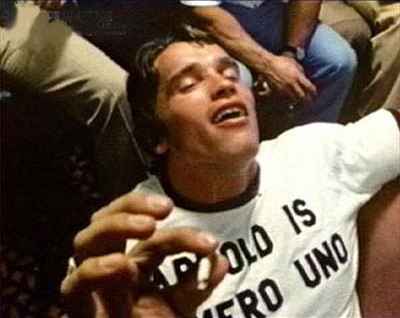 from the film "Pumping Iron"

Polls taken in California last year and earlier this year found a majority of the state’s voters favored the legalization of marijuana.

But that wasn’t the way things worked out on Election Day.

So why did it lose? Well, for some of the same reasons that turn up whenever any controversial proposal is on the ballot, for starters.

First, when it comes to ballot proposals generally, the tendency is to vote no. When voters are uncertain about what a ballot measure will do — and they often are — they usually conclude that the safest course of action is to maintain the status quo by voting no.

Second, voters rarely decide how they are going to vote on initiatives on the weight of the evidence. A single weak argument against an initiative can trump several strong arguments in favor of it.

Third, as a result of the foregoing, ballot initiatives that have organized opposition — and Prop 19 did — are almost always at risk of losing. And if their supporters do not answer the opponents swiftly and aggressively, well, they almost always do lose.

Beyond that, who voted “no” and why did they do so? And for that matter who were the people who voted “yes”?

Exit polls taken in California on Election Day certainly contain that data, but so far I haven’t been able to find a complete demographic breakdown on the Web. (The exception is how Californians voted on Prop 19 by age.)

However, a national poll on marijuana legalization done by the Gallup organization in early October may shed some light on the question.

Gallup found that nationally 46 percent of those polled favored legalizing marijuana, while 50 percent wanted to keep it illegal. Four percent were undecided. If you treat the undecideds as “no” votes, Gallup’s result exactly matches the actual vote on Prop 19.

Gallup did break down its results by major demographic groups. And in the one case where exit poll demographic data was available — the vote on Prop 19 by age group — Gallup’s results and the actual vote very closely match.

So chances are Gallup’s national demographic findings aren’t all that different from the Prop 19 voter profile.

Why would the Woodstock generation be disinclined to support legalization?

Again,
not particularly surprising. Gallup’s demographic breakdown produced
two highly interesting results, however. The first was the figure for
Boomers. Gallup found that among those aged 50 to 64, support for
legalization was 43 percent. The 50 to 64 age group consists entirely of
Boomers. The generation that made pot America’s favorite illegal drug
doesn’t muster a majority for legalizing it. That’s important.

(Prop
19 exit polling found California Boomers — voters aged 45 to 64 in this
case — voted against Prop 19 by a margin of 56 percent to 44 percent.
And they constituted 45 percent of the vote.)

The
second interesting result was the breakdown by sex. Only 41 percent of
women favored legalization. The comparable figure for men was 51
percent.

Why
would women be less inclined to favor legalization than men? Concern
about the effect of the greater availability of pot on children and on
family stability, essentially the same reasons women supported prohibition a century ago, probably.

And why would the Woodstock generation be disinclined to support legalization? Well, 50 percent of Boomers are women, and a large
proportion of Boomers, women and men, still have teenagers in the house
or 20-somethings in college — in other words, kids at the age that
worry you sick, especially when the subject of drugs comes up.

Who killed Prop 19? Bet it was parents.

If
those efforts are to have any chance of success, the first order of
business for legalization proponents should be to start addressing the
concerns of women and Boomer parents over legalization. Starting now.
Not 30 days before the election.

We’ll talk more about this next time.