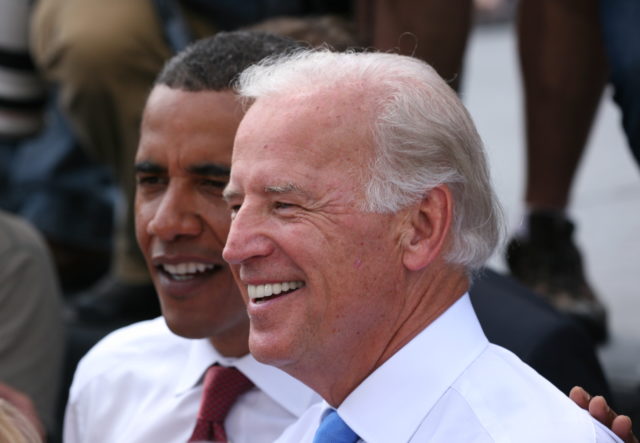 Trump might be re-elected. He is highly unpopular but his Democratic opponent might end up being just as unpopular after a likely vicious campaign. Nate Silver of the website FiveThirtyEight said recently, “A huge question is whether Clinton’s performance (in 2016) was unique to Clinton and her particular problems, or whether her position was closer to a ‘generic Democrat.’ If it’s the former, Trump is an underdog. If it’s the latter, he might be the favorite.”

We need something more than a “generic Democrat.” We need a progressive populist like Senator Elizabeth Warren (D-Mass.) or Senator Bernie Sanders (I-Vermont). If Joe Biden is the nominee, he might end up spending a lot of time defending his votes on NAFTA, the Iraq war and the crime bill. Most of all, he will likely be beholden to his rich donors.

The Democrats have to provide a vision of transformational change. It will be hard because Trump is able to dominate the news cycle every day of the week. The New York Times’ Matt Flegenheimer says that his “tornado of news-making has scrambled Americans’ grasp of time and memory, producing a sort of sensory overload that can make even seismic events — of his creation or otherwise — disappear from the collective consciousness and public view.”

In early 2018, a Pew opinion survey found that almost seven out of 10 Americans said they were overwhelmed by the amount of news there is. Republicans and Republican-leaning independents were more exhausted (77 percent) than Democrats and Democratic-leaning independents (61 percent). News fatigue is more prevalent among those who follow news less often and have a lower opinion of the news media.

Many Americans aren’t particularly political. They tune in off and on. A substantial portion of people learn about the world from Fox News. It is the most watched cable news network and it functions as the propaganda arm of the administration.

Recently Sen. Sanders had a Fox News town hall meeting in the Rust Belt city of Bethlehem, Pennsylvania. He has introduced a bill to establish a Medicare-for-All single-payer health insurance system.

Moderator Bret Baier asked him about health care. Sanders said he favors a single-payer system where people can go to any doctor or hospital, adding that “millions of people today are in networks, which prevent them from doing this, so this gives you freedom of choice in regards to doctors and hospitals.”

Baier turned to the audience and asked: “How many people get their insurance from work, private insurance, right now?”

Many raised their hands.

“Of those, how many are willing to transition, to what the Senator says, a government-run system?”

It seemed that nearly every hand that had been previously raised, stayed up. Cheers and applause rang out.

Sanders emphasized that employer-provided private insurance can disappear in a flash if you are fired or switch jobs. “What we’re talking about is stability, that when you have Medicare-for-All it is there now and will be there in the future,” he said, to even more applause.

Republican strategist Karl Rove was impressed by the town hall. He concluded that attacking Sanders for his socialist views “won’t be as easy as Republicans may think.” Trump was clearly upset. He tweeted about “Crazy Bernie” and wondered why his beloved network had aired the town hall.

In January, Politico reported that Wall Street executives were “getting panicked” over the anticipated presidential candidacies of Sanders and Warren, two of the strongest critics of the financial sector. “It can’t be Warren, and it can’t be Sanders,” an anonymous CEO of a “giant bank” exclaimed.

Sanders recently released 10 years of his tax returns and was ridiculed for having become a millionaire — a member of the 1 Percent — due to a lot of book royalties. In his New York Times column, economist Paul Krugman said these attacks are “deeply stupid. Politicians who support policies that would raise their own taxes and strengthen a social safety net they’re unlikely to need aren’t being hypocrites; if anything, they’re demonstrating their civic virtue.”

Moreover, Krugman criticized the concept of the 1 Percent, saying that putting Bernie in the same class as the Koch brothers is wrong. He said many people don’t realize that the very rich are in “a completely separate social universe.” He said that at a recent event, a fellow economist Janet Gornick “was greeted with disbelief when she mentioned in passing that the top 25 hedge-fund managers make an average of $850 million a year. But her number was correct.”

Krugman adds: “One survey found that Americans, on average, think that corporate C.E.O.s are paid about 30 times as much as ordinary workers, which hasn’t been true since the 1970s. These days the ratio is more like 300-to-1.”

“It’s not about envy. It’s about oligarchy,” he said. The very rich, with a few exceptions here and there, “wield their political power on behalf of tax cuts at the top, a weaker safety net and deregulation.”