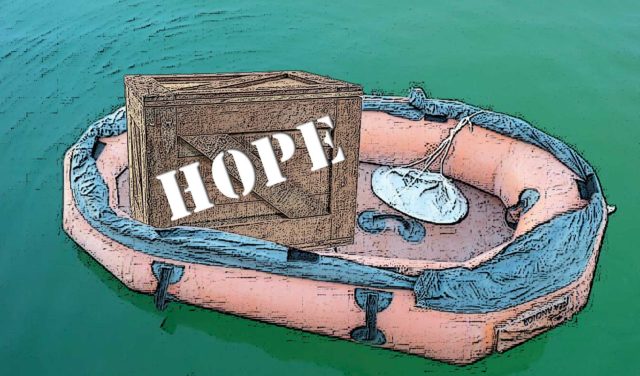 Let’s start with something positive on the national front — hope lives.

We are better off today than we were on Nov. 5. And while it may not have been the blue tsunami many hoped for, it was a blue wave large enough for a good number of Democrats to surf into office.

From the East Coast to Florida, Georgia, Mississippi, Texas, Oklahoma, Nevada and the Rust Belt, Democrats and progressives turned out in record numbers. But unfortunately, so did the members of Trump’s white nationalist party. And while that reality is cause for great concern moving forward, the flipping of the U.S. House of Representatives will now provide a check on what had been virtually unbridled presidential power, and that is a very positive development. We owe this House victory largely to women, both the candidates and the voters who turned out in unprecedented numbers to support those candidates.

The silver lining to this election is not only Democrats taking back the House, but doing so by electing to Congress the first Native American women, the first Muslim women and a whole host of other men and woman who have actually fought and served in the wars we have now been waging for nearly two decades. This last point is important because the perspective of modern veterans has been clearly lacking in Congressional leadership.

This new crop of House members is younger, more idealistic and presumably far less jaded than the members of the ancient, wrinkled ruling class they will be joining. At least for a short while, we can assume this new generation of political leadership will be more concerned with helping our nation move forward than they are with fundraising, clinging to personal power and the rabid pursuit of the status quo for the benefit of the 1 percent and corporate America.

These new Dems ran on health care and improving the economic outlook for the middle class. Let’s hope, now that they’ve won, they will remember that the health care voters demand is not the continuation of prohibitively expensive Obamacare, but rather Medicare for all or some other form of single-payer system. It won’t be easy and it will likely take a blue Senate to get there, but the process needs to begin now.

As for the check on Trump, the priority should be to protect the Mueller investigation. It’s fine to finish the work Devin Nunes blocked on the House Intelligence Committee, but again, let the special prosecutor do his job and everything else will likely take care of itself. Democrats were elected to govern, not spend every day trying to punish Trump and the house minority.

The downside nationally: Trump’s absolutely racist anti-immigrant strategy worked well in several swing states and grew the Republican majority in the Senate. Sadly, this means Trump will be doubling down on this racist strategy to divide the nation and the violence and hate will likely be getting worse before it gets better.

The House can check Trump policy, but nothing can protect us from his insane followers who say things like, “I’d shoot my sister if the president asked me too,” especially when we have a president who just might ask such a thing if he needed a distraction from his own criminal activity. There are many potholes in the road ahead, so be ready.

In Colorado, Dems now control everything, the State House and governor’s mansion. The billionaire architects of the blueprint developed back in 2002 are still hard at work in our state and have now put one of their own into the governor’s mansion in the form of Jared Polis. Unfortunately, as part of this ongoing blueprint, that means the oil and gas industry will still be allowed to do any- and everything it wants in our state. That has always been the blueprint tradeoff — think Hickenlooper coming out with his talk of a special session to undo Proposition 112 if it had passed, just in time to suppress this year’s vote on the setback measure. That was the blueprint in action as was Polis’ refusal to endorse 112.

(For a full understanding of the blueprint see Adam Schrager and Rob Witwer’s book The Blueprint: How the Democrats Won Colorado (and Why Republicans Everywhere Should Care) and Boulder Weekly’s “Who killed the vote on fracking,” Oct. 2, 2014.)

Sadly, the blueprint is still a very misguided, flawed and unnecessary political ploy.

The very quick version: The deal cut by blueprint Democrats with the oil industry was out of the fear that if the oil industry was challenged, it would spend tens of millions of dollars to defend itself and that effort would bring out Republicans in greater numbers causing Colorado to turn red. That theory was always wrong.

In truth, having Prop 112 on the ballot turned out progressives and young voters — people concerned with the fact we only have a decade left to save the planet — in great numbers, which is why the state is now blue again despite the $40 million spent by the oil industry to defeat Prop 112.

Think of it this way: If Mark Udall, his wife Maggie Fox and the Big Greens had demanded Polis turn in the more than quarter of a million signatures that had been collected in 2014 for community control and setbacks — instead of joyfully watching him throw them in the trash as part of a supposed compromise with Hickenlooper designed to thwart Republicans — Udall very likely would still be Colorado’s Senator.

Maybe now that the oil and gas emperor has finally been proven to have no clothes — $40 million and the state went bluer than ever — the misguided blueprint billionaires will alter their political plans and actually encourage another setback amendment on the 2020 ballot. Why not? They now have proof that such a measure increases Democratic participation more than oil money increases Republican participation. Perhaps they will even fund the next effort now that they have been proven wrong and we only have 10 years left to save the planet. Or maybe they’ll just sit back and enjoy their narrow social justice agenda victory while the planet burns. We should all agree with their agenda, just not what they are trading away to get it.

With that, I’d like to say thanks to all the amazing people who worked their rears off to get Prop 112 on the ballot and to take it incredibly far considering they had to fight the oil industry’s money, the Republicans and the most powerful and influential Democrats in the state. Losing by only 15 points under those circumstances, with no money to speak of on your side, makes every one of you a hero.

I know that you are hurting and that many of you have given the last five or six years of your lives to this effort. It would be unfair to ask you not to give up, but that is the hope and the prayer of the 800,000 of us who voted with you. All of us need you now more than ever and we are out of time. Please keep up the fight… after you rest up for a while.