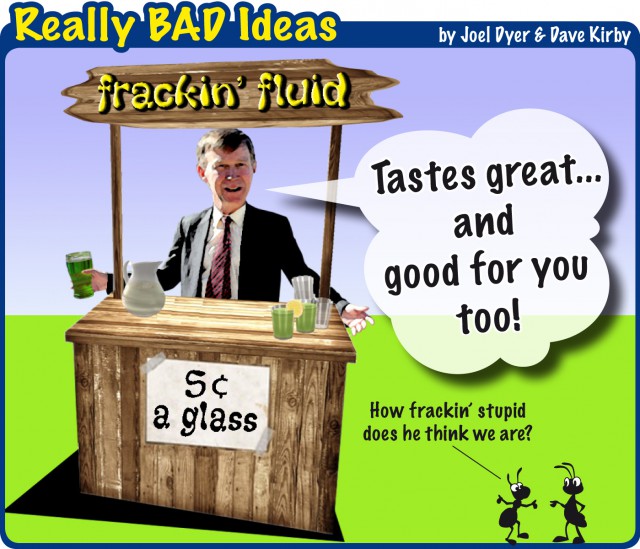 There’s more than one way to lie. You can knowingly offer up false information as truth, or you can offer up little pieces of a story while leaving out other parts of the tale in order to convey a false impression without actually stating an inaccurate fact.

Morally, it’s all the same. Do it and you’re a liar. The governor of Colorado, John Hickenlooper, chose the second path to setting his pants on fire, and it’s not all that funny.

Technically, the governor can’t be punished for fibbing in his recent statements before the U.S. Senate Committee on Energy and Natural Resources, pity. You may recall the untruth in question came about when Hickenlooper decided to entertain the committee with his now infamous recounting of sitting around a table and drinking fracking fluid with his pals from Dick Cheney’s old employer Halliburton, apparently for no other reason than because it’s such a darn safe concoction to ingest.

I guess such seemingly bizarre behavior could be excused. After all, if survivalist action hero Bear Grylls can be fascinated with drinking his own urine on a weekly basis, then why shouldn’t a former oil and gas geologist like Hickenlooper get his rocks off knocking back a few shots of fracking fluid? I say to each his own, if it’s not hurting anybody else.

Not only do I not begrudge the governor his fracking fluid shooters, heck, I’ve caught myself of late wishing he’d drink a lot more of them, straight out of any fracking-fluid truck at any well site located anywhere in our state. But the governor wouldn’t do that, because he’s not crazy, he’s just a liar.

Hickenlooper used his drinking story in an effort to persuade members of Congress that what Halliburton and the other oil and gas companies are doing in Colorado and across our nation is completely safe and beneficial. The governor knew at the time he was drinking Halliburton’s fracking fluid that it was only a test fluid made from food derivatives and that it wasn’t the real deal that was actually being used for commercial energy extraction purposes in Colorado and elsewhere.

In fact, it seems that the only actual use for Halliburton’s so-called experimental, non-toxic fracking fluid is that it gives industry lapdogs like Hickenlooper something they can drink and then lie about in order to deceive their constituents, and even their political peers, into believing that fracking is safe.

The reason Hickenlooper won’t be accepting any challenges to slurp back any real fracking fluid is simple. He knows, or darn sure should know, that according to research by the National Academy of Sciences, real fracking fluid on average contains 632 chemicals; 25 percent of those chemicals have been linked to causing cancer or other cellular mutations; 37 percent have been found to affect hormones; 75 percent have been known to adversely affect sensory organs and respiratory and gastrointestinal systems; and between 40 percent and 50 percent can screw up your kidneys and nervous, immune and cardiovascular systems. So have one more on me, governor. No really, you deserve it.

So next time you hear Hickenlooper say that Colorado has the strictest oil and gas regulations in the country, remember where his mouth has been, and take it for what it is, just another lie. Hickenlooper’s disarming smile has run its course in this state. It is clearly past time for him to use his well-earned pass through the revolving door between government and the oil and gas industry. I hope he has the good sense to move out of the Governor’s Mansion before we have to primary him out with an actual Democratic candidate in next year’s election.

The sooner we get rid of this oil and gas pitchman posing as our governor, the sooner the rest of us, the 70 percent or so of Colorado residents who oppose fracking and the state’s current industry-friendly oil and gas regulatory system, can get back to putting our commitment to the environment, our children’s health and Colorado’s quality of life ahead of the profits of Hickenlooper’s pals. We’ll all drink to that.