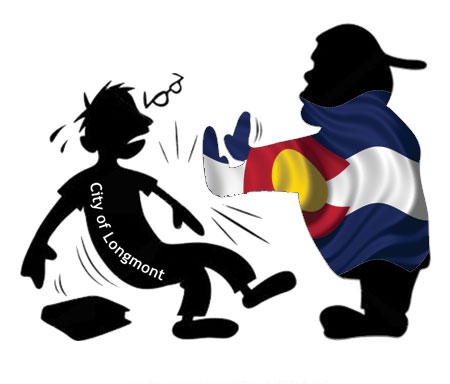 Longmont city council members knew that the state might sue their community over the new oil and gas regulations that they passed a few weeks back. But it was a risk that they were willing to take in order to protect their town’s residents’ health, property values and overall quality of life. And besides, the council and the people of Longmont still held out hope … they still believed that in the end the state might just show itself to be something other than a shill for the oil and gas industry. Unfortunately, their hope was misplaced.

On Monday, July 31, the Colorado Oil and Gas Conservation Commission, by way of the Colorado Attorney General’s office, filed suit against the city of Longmont for the purpose of killing off the most important parts of the town’s new oil and gas regs, now known as Ordinance O-2012-25. The suit came only hours after the ordinance had officially gone into effect.

It was a disgusting display of politics for hire on the part of the state. By attempting to quash these new regulations that are no more than Longmont’s attempt to avoid being cast in a starring role in the sequel to Gasland, the state showed its true colors.

The lawsuit filed Monday has nothing to do with oil and gas extraction, mineral owners’ rights or even state tax revenue. Instead, it is all about the state helping a dirty industry that has come under great public scrutiny of late to prevent Longmont from setting a precedent, a precedent that says that people have the right to protect themselves and their property from being invaded by heavy industry in the name of somebody else’s profit.

Consider this: The new Longmont oil and gas regulations do not prevent oil and gas companies from extracting a single drop of oil or cubic foot of gas from under any portion of the city of Longmont.

That’s right, every bit of the oil and gas that could have been produced before the ordinance was passed can still be produced. The only difference is that companies wanting to develop oil and gas under the city’s neighborhoods might have to horizontally drill a little farther to reach their target.

Longmont’s new requirement that companies site their wellheads and production platforms outside of neighborhoods in places that won’t cause as much loss in property value to nearby homes, while simultaneously reducing potential health risks to neighborhood residents, is simply common sense land use to anyone not sucking on the oil and gas tit.

In other words, only oil and gas companies, people working for oil and gas companies, or people being compensated by the industry, such as mineral owners, industry-funded researchers, PR hacks and politicians, could honestly think that Longmont’s ordinance will hinder production. At worst it will cost a company a little more time on a hole and a few extra feet of pipe to extract their millions of dollars worth of hydrocarbons from the ground.

And the city went even further to be fair and try to avoid being sued. The new rules say that if a company can actually demonstrate that the Longmont regs are keeping them from being able to get to their oil and gas, the city will give them an exemption to the rules so that they can drill anywhere that the state will allow. That’s pretty darned accommodating. So much so, in fact, that many local activists believe that the ordinance has no teeth and is overly industry friendly.

The bottom line is this: The willingness of Longmont to ensure that oil and gas can still be developed from under the city means that the state of Colorado won’t miss out on the collection of one oil-and-gas tax dollar because of the Longmont ordinance, not one dollar. And yet, the state jumped at the first chance to sue Longmont for its effort to try to do what’s right for all involved. From where I sit, only the desire for overflowing campaign coffers and the vain needs of politicians to move up the political food chain can explain such idiocy.

It should be clear to everyone by now that the state of Colorado’s only role in oil and gas industry oversight is that of industry lapdog. The state’s real intention is to use our own tax dollars to force us to accept every single thing the industry wants, no matter how destructive to our communities. If “destructive” seems too heavy-handed a term, then I suggest you take the “tour de frack” through Frederick, Firestone, Dacono and Erie. When you get to Weld County Road 18, take a good look around. It looks like a Superfund site as far as the eye can see, minus the fence and barbed wire of course, at least in some places. Then ask yourself how much you would have to be paid to move your family into one of the houses in the area. You won’t come up with a figure.

The state is sending a message with its lawsuit. If anyone should have the audacity, like the good people of Longmont, to ask for even the smallest concessions from the oil and gas industry to help keep their families safe and healthy and prevent their property values from collapsing, the state will sue you on behalf of its industry keepers, because all that matters is the industry’s profits.

Wake up. The state doesn’t care if your lives, your family and your community have to be decimated in order to please the oil and gas industry.

So to all of you industry-deceived flag wavers who naively have been led to believe that Longmont’s regs are wrongheaded and somehow an assault on our national security because they will force us to buy oil from Middle East terrorists, you can finally relax.

You no longer need to attend city council meetings anywhere to make your arguments. You no longer need to preach to the rest of us about how having a bunch of brown tanks and burners next to our kids swing-sets — tanks that spew two tons of hydrocarbon emissions per tank into the air every year — somehow makes us patriots. Besides, we have such a glut of gas that we have to sell it to China just to get rid of it. Real patriotic.

You can stop spouting the ridiculous rhetoric provided to you compliments of the Colorado Oil and Gas Association (COGA).

You can stop because you are no longer needed. You failed. You were Plan A to stop Longmont from doing the right thing, but the majority of council members, both Republican and Democrat, saw your ridiculous arguments for what they were, industry propaganda.

Only those members of council that still believe that they need the most radical, crazed base of the Republican Party and its oil and gas industry dollars for their impending reelection bids voted to allow Longmont to become the next Frederick, the next town where you can’t attend church, go to the library or to school or play in a public park or even open your windows at night without being exposed to heavy industry and its associated air contamination.

Plan A failed. The state’s lawsuit against Longmont is the industry’s Plan B. For the sake of everyone in this state and many other states as well, we have to hope that Plan B likewise fails. Remember, this is not about keeping oil and gas from being developed from under our neighborhoods. It is simply about requiring the industry to produce its massive profits in a more responsible way that preserves the quality of life, health and property values of all involved.

If that’s too much to expect from our current state government, which has the power to responsibly regulate the industry as opposed to acting like the oil and gas industry’s legal department, then voters from all across this state need to have their own Plan B. One that starts with getting rid of those elected officials, from city councils to the governor’s mansion, whose ears have become so clogged with industry money and lobbyists’ gibberish that they can no longer hear the desires and heartfelt concerns of the vast majority of the state’s citizens.

Longmont must not be viewed as a lone guinea pig, but rather as the first round in a statewide fight to return land use decisions to local communities and counties. All of us have a critical role to play in this battle at the ballot box, and together we can change the outcome.