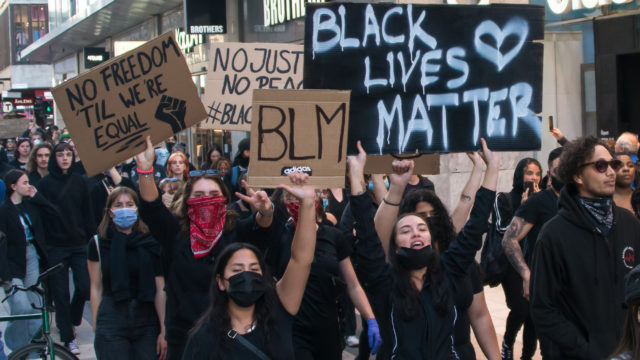 The protests in the wake of George Floyd’s murder by four Minneapolis police officers rightfully reflected waves of anger and activism in the United States and beyond. The atrocious incident in Kenosha, Wisconsin, on Aug. 23, where a white police officer shot Jacob Blake, an unarmed African American man, seven times in front of his kids, proves that the heartbreaking assertion of “I can’t breathe, officer!” was not just the plea of Floyd to survive. These words also symbolize historical demands of black people to be treated fairly and equally in the U.S.

In fact, these demands for equal rights extend beyond the U.S. as well. During the Algerian revolution, Franz Fanon also referred to this suffocation in his book Toward the African Revolution: “We revolt simply because, for a variety of reasons, we can no longer breathe.” In the recent protests, there have been widespread calls for systemic and structural changes. Cornel West saw signs of hope in a broad coalition of protests in recent times. The theme that being black should not itself be a death sentence echoed in different parts of the world.

The fact that of the four police officers involved in Floyd’s murder one was an Asian American, led to some introspective discussions of a complex dynamics of Asian Americans vis-à-vis black people. Of course, the incident should not lead to a generalized conclusion that all Asian Americans are anti-black or that they do not face discrimination themselves. Especially after the Trump administration’s rhetoric of calling the coronavirus “China virus,” different types of racist incidents have taken place against Asian Americans. Likewise, there is an urge inside the Hispanic community to confront racial stereotypes. There is a growing call for discussion among South Asians as well to tackle their own anti-blackness. With the rising xenophobic atmosphere against immigrants and Islamophobic incidents, Hispanic and South Asian communities are also subject to racial slurs and attacks.

That being said, it cannot be denied that there is a problem of anti-blackness within these communities. It may be uncomfortable for many to admit but being judged by the color of the skin happens in many parts of the world. A darker shade of skin can decrease one’s likelihood of getting married or having a good job in many countries. Recent discussions of commercial products to whiten the skin and colorism within Bollywood is a glaring example of that.

One essential step toward building progressive coalitions would be to understand the plight of black people in historical context. Data show that black men are 2.5 times more likely to be killed by the police than white men in the U.S. More than eight in 10 black adults view that they are treated unfairly by the criminal justice system. George Floyd, Breonna Taylor, Ahmaud Arbery and Elijah McClain are not exceptions, they are the latest additions in the list of black people who have been murdered by the state.

Studies have shown that inequality is not color-blind. Black people are discriminated against in accessing equal opportunities for education, health and jobs. Consequently, coronavirus has also hit black people harder in a lot of U.S. states. Data shows that on average the mortality rate among black people is 2.4 times higher than that of white people in the U.S.

One positive aspect of recent times is that young people from other communities of color are increasingly showing signs of solidarity by taking part in protests for the Black Lives Matter movement in different ways. Young Asian Americans are calling for change, while some South Asian groups have also taken active stance in recent times. To make this more sustainable, every conscious individual should make active efforts to bridge any existing gap between themselves and the black community. Rights that the immigrant communities enjoy today are due to the advances made by the civil rights movement spearheaded by black political activists in the 1960s. A multiracial, multiethnic movement from below can make the progress truly feasible.

There is a lack of consciousness about the history of black people in the current education curriculum. One way to redress the situation is that all schools, colleges and universities should offer courses on history of racism emphasizing the plight of black people in their core curriculum. This will help fight anti-blackness in other communities and help remove racial stereotypes. If Germany and South Africa can address their histories of holocaust and apartheid in their education system, the U.S. can follow their examples.

Academic departments and educators should make active efforts to incorporate work of African American writers while reviewing the topics of national history, the legal and criminal justice system, and policing-related studies in their course design. Black people have voice, but often institutions choose not to hear. Christina Sharpe has brilliantly demonstrated in her book On Blackness and Being about how black people have been denied agency throughout history and how violence against black people cannot be detached from being black. Saidiya Hartman showed in her book Scenes of Subjection that black people could never taste freedom in the U.S.

Changing anti-black attitudes within other minority communities can begin with their leaders’ organizing public awareness campaigns to get rid of the stigma associated with darker skin color. International students’ associations on different campuses can arrange dialogues and organize activities with black students’ groups. Different solidarity groups can increase their visible support for black people through real life and social media campaigns throughout the year and not just during Black History Month.

More deeply, there needs to be honest soul-searching as to why the current national and global structures do not speak for black people. Achile Mbembe argues in his book Necropolitics that liberal democracy and racism have actually been compatible in the American context. Neoliberal capitalist policies aggravated the plights of black people in many ways. Academics and policymakers should look for ways to redress the structural discrimination against black communities.

These suggestions are not exhaustive, but they can be a stepping-stone for building broader coalition of solidarity to address racism in the U.S. and elsewhere. No nation can progress by putting its minorities in the back seat. Other communities of color, while fighting their own battles, need to address these biases and build solidarity with all oppressed groups. Echoing Langston Hughes, we dream of the day when every black person in the country will be able to sing: “I, too, am America.”

Rezwan Masud is a Ph.D. student in the Department of Political Science at CU-Boulder. Reach him at more6600@colorado.edu. Haider Khan is a University Distinguished Professor at the Josef Korbel School of International Studies, University of Denver. Reach him at haider.khan@du.edu.