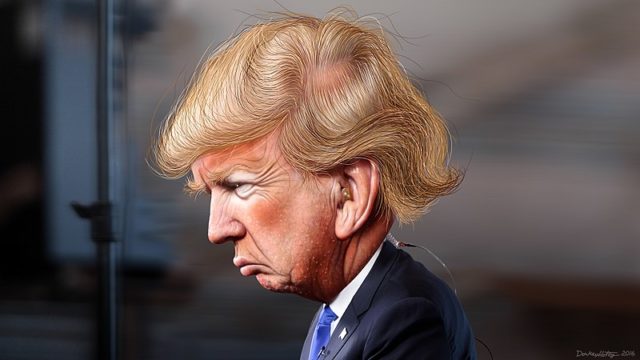 Almost certainly, we are in the middle of the biggest political scandal in American history. After Trump’s obsequious performance in Helsinki, it feels like The Manchurian Candidate on LSD directed by David Lynch. Most likely, Trump is tangled up in financial crimes with Russian oligarchs and is being blackmailed by Putin. Adam Davidson in The New Yorker on July 19 provided a calm and careful analysis of the evidence for this in a piece entitled “A Theory of Trump Kompromat.”

Our country is in serious trouble. The Russiagate scandal goes far beyond Trump, his family and flunkies. It is forgotten that in May 2017, The Washington Post published the transcript of a conversation from June 2016 among the House Republican leadership, in which an anxious-sounding House Majority Leader Kevin McCarthy said that he was aware “the Russians hacked the DNC and got the opp research that they had on Trump” and speculated “there’s two people, I think, that Putin pays: (Congressman Dana) Rohrabacher and Trump.”

There was a burst of laughter. Then House Speaker Paul Ryan insisted that the conversation remain off the record, adding, “What’s said in the family stays in the family.” Unfortunately for them, someone was taping the conversation. McCarthy and Ryan would later claim they had just been kidding around.

Russiagate is giving us a glimpse of the widespread corruption in Washington D.C. The Republican leadership is particularly concerned about what may unfold. But the scandal may raise questions that will discomfort leading Democrats as well.

In November 2017, millions of leaked documents known as the Paradise Papers revealed that the U.S.-led push for free trade and a globalized economy created vast, unaccountable flows of untaxed offshore wealth. A transnational capitalist elite has emerged, which looks for ways to shelter and launder this money across borders. For example, the papers revealed the secret business deals of Wilbur Ross, Trump’s commerce secretary, with the family of Vladimir Putin.

On Sept. 14, 2016, Newsweek published a remarkable and lengthy cover story by Kurt Eichenwald entitled “How the Trump Organization’s Foreign Business Ties Could Upend U.S. National Security.” The piece dealt with the organization’s business dealings in many nations around the world. Eichenwald noted:

“A close examination by Newsweek of the Trump Organization, including confidential interviews with business executives and some of its international partners, reveals an enterprise with deep ties to global financiers, foreign politicians and even criminals, although there is no evidence the Trump Organization has engaged in any illegal activities. It also reveals a web of contractual entanglements that could not be just canceled. If Trump moves into the White House and his family continues to receive any benefit from the company, during or even after his presidency, almost every foreign policy decision he makes will raise serious conflicts of interest and ethical quagmires.”

Eichenwald concluded: “Never before has an American candidate for president had so many financial ties with American allies and enemies, and never before has a business posed such a threat to the United States. If Donald Trump wins this election and his company is not immediately shut down or forever severed from the Trump family, the foreign policy of the United States of America could well be for sale.”

Over the years, Trump went bankrupt so many times that legitimate banks wouldn’t lend to him. He turned to Russian oligarchs to fund his projects, and he laundered their dirty money for them. In 2014, Donald Trump, Jr. told a reporter, “We don’t rely on American banks. We have all the funding we need out of Russia.”

On July 13, 2017, The New Republic published a lengthy cover story by investigative journalist Craig Unger entitled “Trump’s Russian Laundromat.” The subtitle was “How to use Trump Tower and other luxury high-rises to clean dirty money, run an international crime syndicate, and propel a failed real estate developer into the White House.”

Michael Klare, professor emeritus of peace and world security at Hampshire College, said that most observers missed “the principal outcome of the (Helsinki) summit: Trump’s and Putin’s rollout of what could become a new model of international relations based on their joint, monopolistic management of world affairs.” He felt that it would be dangerous if world power was centralized “in the hands of two nuclear-armed megalomaniacs. The erosion of democracy at home is of great concern, to be sure, but so is its disappearance on the world stage.”

Bernie Sanders has outlined the dangers we are facing: “Inequality, corruption, oligarchy and authoritarianism are inseparable. Around the world we have witnessed the rise of demagogues who, once in power, use their positions to loot the state of its resources. These kleptocrats, like Putin in Russia, use divisiveness and abuse as a tool for enriching themselves and those loyal to them.”