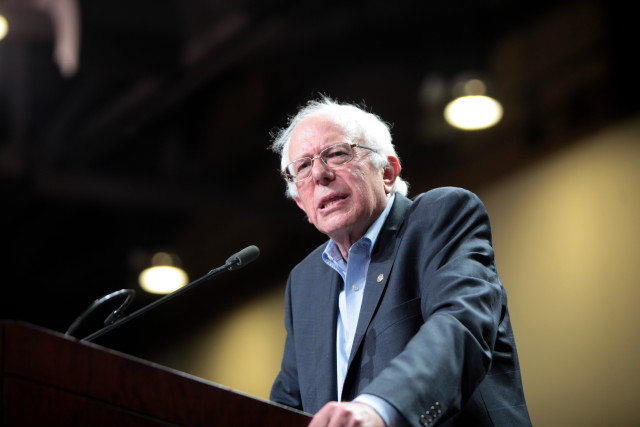 There hasn’t been much serious debate about foreign policy in the presidential race. The Republicans promise endless war and offer only bluster and B.S. The Democratic race has been somewhat better.

Hillary Clinton says she has more experience in foreign policy because she was Secretary of State, whereas Bernie Sanders argues that he has better judgment, citing his preference for diplomacy and his criticism of “regime change” interventions and the military-industrial complex.

Earlier in the year, Peace Action — the largest peace organization in the United States — announced its endorsement of Sanders for president. The group is the descendant of two other mass U.S. peace organizations: the National Committee for a Sane Nuclear Policy (SANE) and the Nuclear Weapons Freeze Campaign. This is the first time in over two decades they have endorsed a presidential candidate.

Peace Action praised Sanders’ opposition to both Iraq wars, support of legislation to reduce spending on nuclear weapons, strong backing of the Iran agreement, votes to curb military spending, and championing of diplomacy over war. Before Peace Action’s board of directors voted overwhelmingly to have the organization’s Peace PAC back the Sanders campaign, an online poll of Peace Action’s members revealed support for endorsement by 85 percent of the respondents.

Sanders’ record is quite different from Clinton’s. Many progressive analysts have criticized her for being a militarist as U.S. senator and Secretary of State. For example, political scientist Stephen Zunes says, “Her hawkish views go well beyond her strident support for the U.S. invasion of Iraq in 2003 and subsequent occupation and counter-insurgency war. From Afghanistan to Western Sahara, she has advocated for military solutions to complex political problems, backed authoritarian allies and occupying armies, dismissed war crimes, and opposed political involvement by the United Nations and its agencies.”

Siegman is the president of the U.S./Middle East Project, was the executive director of the American Jewish Congress from 1978 to 1994, and is a leader of the Synagogue Council of America.

She promised that she would protect Israel from the “threat” of a UN Security Council resolution demanding an end to the occupation of the West Bank. Siegman notes, “She said she would insist that Palestinians can achieve statehood only in negotiations with (Israeli Prime Minister) Netanyahu. Yet even President Obama, who until recently held that same view, finally realized the absurdity of that demand following Netanyahu’s declaration during the last Knesset elections that Palestinians will not live to see a state of their own while he is Israel’s prime minister.”

Siegman says that in her speech, “she managed to avoid even a single sentence that acknowledges the subjugation, disenfranchisement and humiliation Palestinians have been subjected to in the half-century of Israel’s occupation.”

He said that was a real contrast to what Bernie Sanders said in a speech AIPAC did not allow him to deliver to its delegates via Skype. (In 2012, AIPAC allowed GOP presidential candidates Mitt Romney and Newt Gingrich to address their gathering by video link).

According to The Intercept, few in the broadcast media covered Sanders’ speech. The full text can be found here.

“To be successful, we have to be a friend not only to Israel, but to the Palestinian people, where in Gaza, they suffer from an unemployment rate of 44 percent — the highest in the world — and a poverty rate nearly equal to that,” Sanders said. He called for an end to the economic blockade of Gaza.

Israel, he argued, is compounding the suffering with its own aggressive policies. Sanders called on Netanyahu to pull back settlements in the West Bank and turn over hundreds of millions of shekels in tax revenue to Palestinians. Peace, he also said,” will mean a sustainable and equitable distribution of precious water resources so that Israel and Palestine can both thrive as neighbors … Right now, Israel controls 80 percent of the water reserves in the West Bank. Inadequate water supply has contributed to the degradation and desertification of Palestinian land. A lasting peace will have to recognize Palestinians are entitled to control their own lives, and there is nothing human life needs more than water.”

Sanders said security meant “achieving self-determination, civil rights, and economic well being for the Palestinian people.” He also criticized Palestinian leadership (particularly Hamas for its rocket attacks on Israeli civilians), Iran and Arab regimes. Throughout his career, he has been a strong supporter of a two-state solution.

Sanders is the most successful Jewish candidate for president but he is also the candidate who speaks most honestly about the Israeli-Palestinian conflict. With his heartfelt, blunt and pragmatic speech on the Middle East, he indicates that he could be a great president.