The massive 10-part PBS documentary series on the Vietnam War by Ken Burns and Lynn Novick starts by saying the war  was “begun in good faith by decent people out of fateful misunderstandings, American overconfidence and Cold War miscalculation.”

If you watch the entire 18 hours, the notion that the American war was “begun in good faith” is debunked constantly, episode by episode with meticulous documentation. The series impressively reveals the sordid lies and deceptions of American policy makers and the horrific indecency of a decades-long genocidal neo-colonial war.  The series offers little comfort to the right-wingers who have tried to convince Americans that the war was, as Ronald Reagan put it, a necessary “noble cause,” which could have been won if it weren’t for the supposedly liberal media and the weak-kneed liberal politicians.

The series acknowledges that Vietnamese communist leader Ho Chi Minh was also considered the leader of the nationalist movement against French colonialism. Ho appealed several times to the U.S. to recognize Vietnam’s right to independence, only to be ignored each time. The first time was in 1919 at the Versailles Peace Conference following World War I. He attempted to present U.S. President Woodrow Wilson with his proposal for Vietnam’s independence, but was turned away.

During World War II, Ho and his movement worked with U.S. intelligence (the OSS, the predecessor of the CIA) in fighting the Japanese and Nazi-collaborationist French who were occupying Vietnam.

In 1945 at a massive rally in Hanoi, the Communist-led Vietnamese nationalist movement put forward a “Declaration of Independence,” whose first three sentences came straight from the U.S. version. The struggle against the French continued until the Vietnamese won in 1954. During this war, the U.S. bankrolled and supplied the French. Vietnam was then divided and the U.S. created a client regime in the south. In 1956, the U.S. supported cancelling national elections to reunify Vietnam. Eisenhower later said that Ho Chi Minh would have won those elections.

That’s only part of the inconvenient  history of the war that is recounted in the series. But the main focus is on the personal stories of combat veterans on all sides. John Musgrave, who was a Marine, talks about how racism was crucial to basic training. “Turning people into objects is an important tool when children are fighting your wars,” he says. He describes how his personal demons almost drove him to suicide after the war. He became empowered when he became an activist in the Vietnam Veterans Against the War (VVAW). In 1971, he and about 800 other veterans individually tossed their medals, ribbons, discharge papers and other war mementos on the steps of the U.S. Capitol, rejecting the war and the significance of those awards.

As someone who politically came of age during the war and participated in the anti-war movement, I found the series spellbinding but also somewhat bewildering. As historian Maurice Isserman points out, Burns and Novick “manage simultaneously to offer a thorough indictment of the war, and a dismissal of most of the people who were committed to ending it.”

You get the impression that anti-war sentiment primarily grew out of a wish to avoid getting drafted and that the movement against the war regularly disparaged veterans of the war. There is the urban legend of U.S. soldiers being spat upon and insulted by antiwar protesters upon returning home from the war. In his study The Spitting Image: Myth, Memory and the Legacy of Vietnam, sociologist and Vietnam veteran Jerry Lembcke says there isn’t any contemporary evidence from newspaper, magazine or TV accounts of antiwar protesters ever spitting on a veteran. The stories only emerged many years later after the release of the Rambo movies. In 1990, the stories really proliferated as a war fever was drummed up in preparation for the first Persian Gulf War.

Lembcke collected over 200 “I was spat upon” stories and found many had implausible details. He doesn’t say that anybody lied to him and concedes that he couldn’t prove the negative (that the stories weren’t true). However, he cites considerable evidence of antiwar protesters expressing empathy for the troops. From early on, anti-war marches had huge banners saying “Bring Our Boys Home.” Unlike mainstream media, anti-war publications covered every G.I. and veteran protest. There were many anti-war G.I. coffee houses which popped up around military bases. They were enthusiastically supported by the civilian anti-war movement. In the last years of the war, the VVAW played an important leadership role in the movement.

Despite its flaws, the series is an impressive and moving work. Burns hopes it will help heal the wounds of division in the country. That’s unlikely, but perhaps it will dampen the hawkish spirits being stirred up these days. 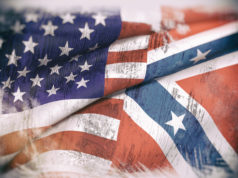