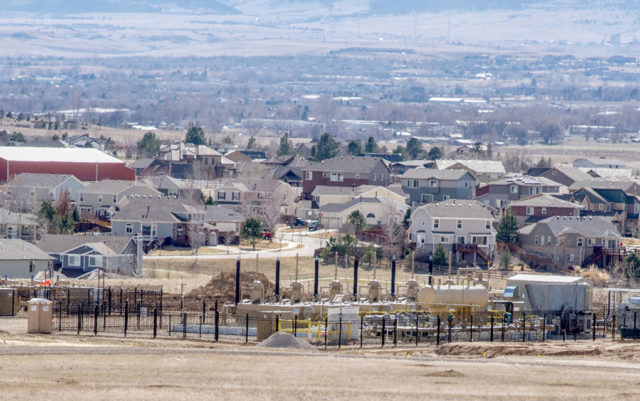 Boulder County Commissioners Elise Jones, Deb Gardner and Matt Jones voted unanimously last week to adopt rules on implementation of Senate Bill 181. The Commission and its staff demonstrate what is possible when government is sincere about protecting its people rather than trying to draw a dodgy line that also protects the very polluters the law was designed to regulate. For the Rip van Winkles out there, this means the oil industry.

The rules may not be perfect.  They are a human endeavor after all.  But they are light-years ahead of the state’s efforts that have cost the public many millions and delivered next to nothing. The state, clearly guided by Gov. Jared Polis’ market-oriented politics, has slow-walked implementation of SB 181.

As a result, the state’s regulatory landscape looks pretty much like it did before the passage of the law nearly two years ago. All the self-congratulatory propaganda generated by the Polis administration cannot bury the facts. Over 3,400 drilling permits have been approved since Polis took office, not one facility has been shuttered for threatening public health, and our abysmal air quality has not improved perceptively, even in the pandemic.

Boulder County Commissioners wisely gave the rulemaking responsibility to their Planning Division. Deputy Planning Director Kimberly Sanchez almost certainly provided the day-to-day guidance. The division interviewed many people with differing perspectives on the issue before it began putting pen to paper. It shows. The rules are particularly strong on water use and disposal, air pollution, and bonding/financial assurance for drillers and operators. These subjects forming the core of the law are yet to be taken up substantively by the state.

The County’s proposed bonding and financial fitness standards, which are demanded of the oil and gas operator annually, have operator-bonding requirements that will be set according to the operator’s financial condition and the perceived size of the endeavor’s health and environmental risks. A $25 million umbrella insurance policy will also be imposed. According to the background discussion contained in the regulations, these bonding and insurance thresholds were developed after listening carefully to the recommendations of the County’s Risk Management experts and experienced members of the community on the risks industrial scale oil development poses to the county’s citizens and environment.

The air pollution regulations are smart and brave, but only if the county were a silo protected with invisible walls rising to the heavens would they be totally effective. As the data from the Boulder Reservoir air-monitoring station show, pollution from Weld County’s 22,000 wells is the major contributor to Boulder County’s terrible pollution problems. Indeed, Weld’s outsized contribution to the entire northern Front Range’s severe air quality problems is pretty much accepted science, even by the industry.

For example, in the winter months Weld’s oil and gas pollution causes about 20 parts per billion (ppb) of the Front Range’s ozone load. If these pollutants were eliminated, Colorado could achieve the federal ozone public health standard of 70 ppb. The extent of its contribution is further solidified when we learn that although gasoline demand has dropped precipitously during the pandemic, falling to a 20-year low over Thanksgiving, our air quality has not improved appreciably.

That we are destroying the planet and ourselves by our continued reckless development of fossil fuels is also accepted science. Economies such as Weld’s that rely on fossil fuel for short-term wealth generation have adopted the battle cry of liberty. This defense, if carried far enough, also guarantees their extinction — and ours.

John Dewey, the early 20th century American philosopher, examined the ineluctable tension that exists between liberty and democracy. He said, “democracy … is the idea of community life itself.” And individuals who deny or confuse the value of that communal relationship in the name of liberty “are monstrosities.” Individual liberty must at some point seek common ground with community life, or the common good cannot be realized. In the case at hand, species survival may itself be in play. The extent of world governments’ complicity in protecting individual interest or liberty over the community is perhaps revealed in a very recent report from the International Monetary Fund. That report says the oil and gas industry enjoys a subsidy greater than $5 trillion annually. Ah, liberty! Ah, extinction!

Only when the Boulder County planners followed the lead of the state regulators at the COGCC do they get it “kinda” wrong. For example, the County follows the state’s lead on flowlines, those small lines that are generally limited to onsite operations. The state ruled that, because of the potential costs, removal would be decided on an individual basis. It is also true that if state rules required removal, the Firestone tragedy in which two men were killed, innocently changing out a hot water heater, would have never happened. The flowlines near the home, which were abandoned and supposedly disconnected, would not have filled the basement with methane gas that triggered the explosion.

The County should have dumped the state’s timid rules and adopted Mother’s Rule of Messes instead: you made it, you clean it up. If they required flowline removal, future explosions from abandoned lines would be eliminated. But this is a relatives minor objection since the rule does allow the County to remove flowlines on a case-by-case basis. Not perfect, but workable with a vigilant public.

The County was also going to follow the state’s new setback standard of 2,000 feet between people and wells. Unlike the state, the County was not going to allow for any exceptions to that standard. Clearly someone in the County’s Planning Office knows that in the regulatory world exceptions become the rule, especially when the regulation governs the behavior of privileged and moneyed interests.

I and others warned at public hearings held before the rules were adopted that the state’s 2,000-foot setback requirement had no scientific basis. It was merely a political plaything, despite the state’s propaganda barrage to the contrary. The Commissioners were listening, for the rule was changed to 2,500 feet in the final regulations. It has some scientific support. But even more importantly, the proviso was added that “minimums and distances may be greater … if necessary to protect public health, safety, and welfare, the environment and wildlife.” This is an extremely important final addition. It allows new scientific findings about the danger of oil and gas development to be considered in an intelligent and timely way.

For example, a new study by Harvard’s School of Public Health found airborne radiation at least 12 miles downwind of fracking sites. On average, the increases were found to be 7% above background, with polonium 210 and lead 210 the common radioactive particles. These radioactive particles can lead to cancer and the destruction of a person’s DNA. Since their half-life is greater than 1,000 years, all ingestions have the potential to have cumulative effects well beyond 7%.

Some will remember that polonium was used to poison and kill a former Russian spy in London some years back. The state has already concluded in its latest rulemaking session that the Harvard findings pose no risk to Coloradans living downwind of fracking operations.

The people of Boulder County should applaud their government for trying to do the right thing, for trying to protect their health and their environment as a condition for allowing new oil development. Even more important, equal emphasis has been given to existing operations. They come under the same health and environment protecting regulations, with the exception of the setback requirements, of course.

This exposes another difference between the County and the state rulemaking effort. For not only is the state apparently using a geologic clock to mark its progress, but the emphasis has been almost exclusively on new wells.

The industry, though it continues to seek some new drilling permits to prop up its asset portfolio for the disappearing greater-fool-buyer, is in free fall and on life support. The big drillers in the state have downgraded the value of their assets tremendously. One of the largest drillers, Extraction, whose raison d’etre is neighborhood drilling, has been in bankruptcy protection for months. Its stock tumbled to less than 5 cents a share the other day, with no buyer in sight.

Thus, the state’s concentration should be on the existing oil and gas system as Boulder government has correctly reasoned. But it is not. There are 129,000 wells in the state, many of them leaking to high heaven. The state should be monitoring those wells, identifying the big leakers and getting them fixed. That should be its first order of business. But it is not. It is holding endless kissy-face sessions with “stakeholders” to determine how new drilling can be accommodated while protecting the public a little bit, and with no real science to back up its decisions. The fault is Polis’, but the state’s regulatory system has played a part.

It is a 19th-century system designed to support the commerce of its time — mineral extraction and water development for real estate speculation and big agriculture. Thus the state handed off a law that was meant to regulate oil and gas to the very agency that had from its inception been asked to encourage and protect oil development. It’s hard to turn a counting house into a cathedral.