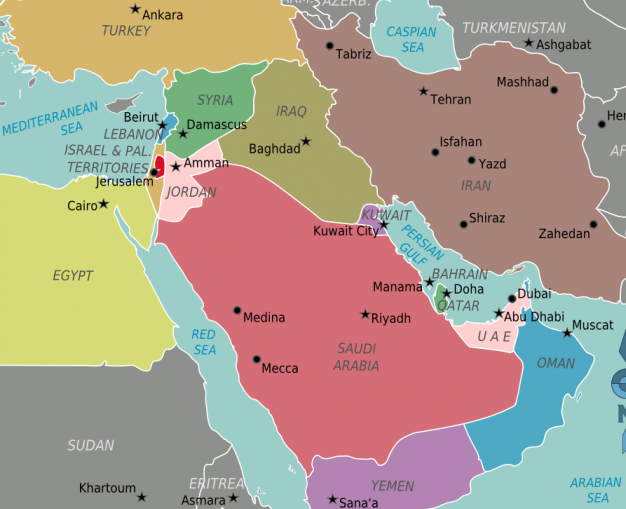 In the last several years, a new conventional wisdom has emerged in the West about conflict in the Middle East. World leaders, public intellectuals, policy analysts and media commentators have been claiming the region’s instability is primarily the result of unchanging ancient blood feuds arising out of deeply rooted hatreds and rivalries between Sunni and Shia Muslims.

Barack Obama and Ted Cruz have both offered this explanation. So have many others such as New York Times columnist Tom Friedman, Sarah Palin and comedian Jon Stewart. Former Fox News pundit Bill O’Reilly said, “The Sunnis and Shiites want to kill each other… They have fun … they like this. This is what Allah tells them to do, and that’s what they do.”

Hashemi and Postel say the authoritarian regimes “suffer from multiple political, economic, environmental and demographic crises that have become steadily worse with each passing decade.” They are “weak states,” a concept developed by Joel Migdal, professor of international studies at the University of Washington.

These governments have limited power and capacity to exercise social control. They have to deal with highly complex societies composed of a heterogeneous mixture of social organizations such as ethnic and religious groups, villages, clans, landlords and various economic interest groups.

Hashemi and Postel observe that in the 1960s and 1970s, political opposition to rulers in several Muslim countries was led by various socialist, communist and left-wing movements. To combat these currents of dissent, “Islamic political groups were allowed greater freedom of movement and association in the hope that they would challenge the popularity of these secular opposition groups, thus deflecting criticism from the state itself (and the ruling elites who controlled it).”

Hashemi and Postel argue that the Middle East’s sharp turn toward sectarian warfare began in 1979 when the Shah of Iran was overthrown by a popular revolution. Saudi Arabia and other Sunni authoritarian regimes portrayed the revolution as a distinctly Shiite and Persian phenomenon that was a perversion of the Islamic tradition. They began a propaganda war which would deeply impact Sunni-Shia relations.

There always has been conflict between Sunnis and Shiites, but there also have been lengthy periods of peaceful co existence. Before the U.S. invasion of Iraq in 2003, twenty out of fifty marriages in Baghdad were between Sunnis and Shiites. Iraqi dictator Saddam Hussein has been described by a BBC commentator as a “Sunni strongman who fought Shia Iran.” But Saddam also collaborated with the Shah’s Iran and invaded Sunni Kuwait. He killed any Iraqis who challenged his rule, which included quite a few Sunni Kurds and Arabs.

In 2011, there was a peaceful non-sectarian revolt in Syria which emphasized universal social and economic grievances with slogans advocating human dignity, social justice and democratic rights. Demonstrators came from a broad cross-section of society: Sunnis, Shiites, Alawis, Druze, Christians and atheists. Immediately, Syrian dictator Bashir al-Assad responded with horrendous violence and portrayed all of the protesters as Sunni terrorists like al Qaeda.

If you want to better understand what is going on in the Middle East today, Hashemi and Postel’s book is crucial. It features the work of historians, anthropologists, political scientists, scholars of religion and international relations theorists. The first section provides big-picture historical, theoretical and geopolitical perspectives on the sectarianization process. The second section provides detailed case studies, showing how the sectarianization process has played out in Syria, Iraq, Saudi Arabia, Iran, Lebanon, Yemen, Bahrain and Kuwait.

The concluding chapter is by Timothy D. Sisk, professor of international and comparative politics at the University of Denver. He consults the growing library of research into ethnic and religious violence and post-conflict peace-building to find lessons for de-sectarianization. Two of the most important comparative cases for peaceful transformation are in Northern Ireland and Bosnia where seemingly intractable violent sectarian conflicts were ended. It took a lot of work in those countries but there is hope if we are committed to peace.