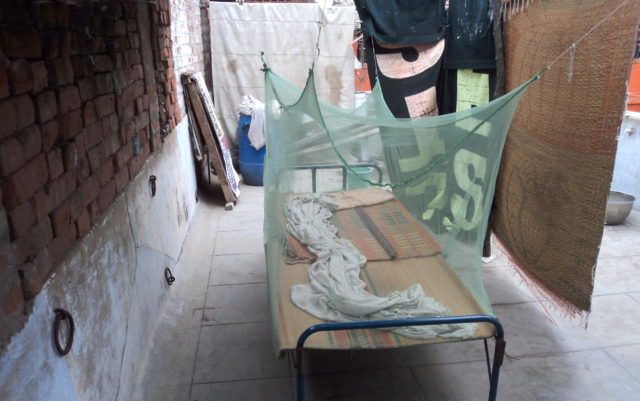 In the five years I have lived in Boulder, Colorado, I have seen bugs, ants and roaches, but not a single mosquito. I know they exist, but so far, it’s been a mosquito-free life. Yet, I decided to spend a recent week under a mosquito net tied to my bed in the comfortable duplex apartment of University of Colorado Boulder family housing. Rationing air supply through a mosquito net at night is not fun, but it helped me relive and re-sensitize myself to the grave reality of malaria, a disease that greets me every time I visit my home country, India.

Two recent events made me take this step. Another World Malaria Day passed by on April 25 and my best friend since college, a staff sergeant in the U.S. military, is busy packing thousands of anti-malaria pills for his deployment in Iraq soon. Here in the United States, we think of mosquitoes as a nuisance. They ruin cookouts and sporting events, spoiling the joy of spending a summer night outside. But, for more than 3 billion people around the world, or 50 percent of the world’s population, mosquitoes are deadly. They spread diseases like malaria, which is one of the primary health threats to American troops stationed around the world.

I was diagnosed with malaria in my teens and remember a medicinal haze of walls continuously melting into each other amid high fever and bouts of nausea and vomiting. Years later, I witnessed malaria in its full power, in the remote parts of central India, affecting pregnant mothers and children fatally. As I visited these locations, I tried to protect myself from the disease in many ways — medicines, mosquito repellent creams, home remedies — and found mosquito net as the cheapest and most effective tool. The net guaranteed a good night’s sleep even as mosquitoes the size of big paper clips partied the night away around me.

This is a snapshot of the daily struggles citizens undergo in economically-developing countries. Along with global poverty, marginalization and gender discrimination, the battle with mosquitoes seems relentless and hopeless. It exacerbates conditions for violence and extremism that spills over into other countries.

According to World Health Organization, this year, nearly 438,000 people around the world will die from malaria, more than 75 percent of them children under the age of 5. This, at a time when malaria is completely preventable and treatable — all it takes is a $10 bed net to help protect someone from the mosquitoes.

My comfortable life in the U.S. has made me look for ways to show my support for friends as well as billions of people around the world who are at risk of malaria. I have found a conscientious and well-intentioned partner in the United Nations Foundation’s Nothing But Nets campaign.

A decade-old initiative, Nothing But Nets works with the government, private organizations, sports community and most importantly, listens to community and diverse voices. It looks at malaria as something beyond a disease, as a product of environmental, political and social reality. By zeroing in on a long-lasting and reasonable solution to prevent malaria — insecticide treated bed nets — the campaign also proposes a workable solution for the problem. This is why I chose to champion our mutual cause and the solution.

Earlier this year, I witnessed inspirational leaders agree with me on what malaria means and what needs to be done. From acclaimed female soccer player Abby Wambach to President Obama’s National Security Advisor, Ambassador Susan Rice, all came together at a Nothing but Nets champions conference in Washington D.C. Far from the deadlock, I also saw congressmen, both Republicans and Democrats, agreeing to work on an issue that affects the U.S. and global community.

There is much hope for eradicating malaria. We are doing much better than in the year 2005, when the President’s Malaria Initiative began under President George Bush’s leadership. Today, thanks to the delivery of over 1 billion nets by global health organizations such as the President’s Malaria Initiative and the Global Fund to Fight AIDS, Tuberculosis and Malaria, along with other interventions, tremendous progress has been made. An estimated 6.2 million lives have been saved since 2000, and childhood deaths in Africa have been reduced by 71 percent.

Many like me in the U.S., who have experienced malaria or know dear ones at risk of malaria, are committed to protecting kids and families around the world from this disease. We have joined Nothing But Nets, which is working with the U.N. and other partners to help beat back the spread of malaria and protect vulnerable populations, like refugee families.

As a Nothing But Nets champion, I raise awareness and funds in my community, and advocate to elected leaders in Congress who have the power to fund life-saving programs such as the President’s Malaria Initiative and The Global Fund.

Whether you’re a student, retired senior citizen or a CEO, anyone can make a huge difference in this global fight. All it takes is $10 to change someone’s life. Join the movement. Visit www.NothingButNets.net and get involved.

I slept under a mosquito net and relived the feeling of being safe from malaria and getting a good night’s sleep. Let’s make sure we provide this option to billions of people across the world and safeguard our troops. Let’s spread some hope and be part of an enabling, empowering story.

Ashmi Desai is a Ph.D. Candidate in Media Studies at CU Boulder and supporter of Nothing But Nets’s anti-malaria campaign.