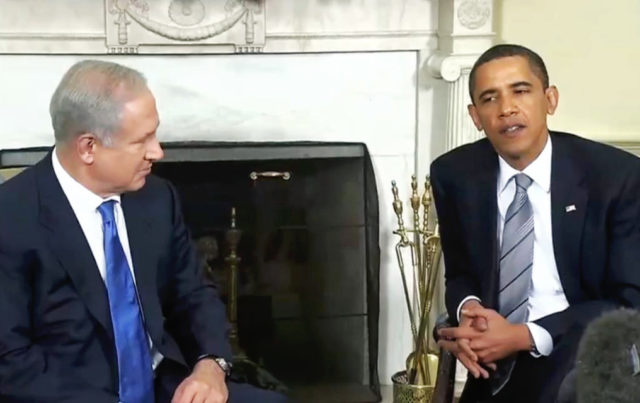 Wiki commons/Executive Office of the President

Israel Will Be the Great Foreign Policy Debate of the Democratic Primary” proclaimed a headline on BuzzFeed News in January. Support for the Israeli government is no longer a bipartisan cause. “I think every 2020 presidential contender will be asked how can they stand by Benjamin Netanyahu when he openly supports Trump’s border wall and compares it to his own Draconian policies,” said Walheed Shahid, communications director for the influential progressive group Justice Democrats.

IfNotNow, a progressive organization whose goal is “to end American Jewish support for the occupation,” is planning to pressure the Democratic Party. Yonah Lieberman, a founding member of the group, told BuzzFeed News, “For us, for young American Jews, we don’t see a distinction between supporting Palestinian freedom and supporting a Green New Deal. We don’t see a distinction between believing that the occupation is a moral crisis and believing that health care is a human right.”

IfNotNow is urging 2020 presidential hopefuls to boycott the American Israel Public Affairs Committee (AIPAC) annual conference later this month. AIPAC is a lobby which claims to speak for the American Jewish community, but it is more hawkish and supportive of Netanyahu than most American Jews are.

In 2016, while running for president, Bernie Sanders shocked some when he declined to speak at the AIPAC conference because he was busy campaigning. He instead spoke at a rally in Salt Lake City. He offered the speech as a telecast to AIPAC, an offer that was denied. In previous years, AIPAC had allowed Newt Gingrich and Mitt Romney to address the conference remotely.

Unfortunately, few in the broadcast media covered Sanders’ speech. He told his audience that he has always supported Israel’s security but insisted “peace also means security for every Palestinian. It means achieving self-determination, civil rights and economic well-being for the Palestinian people.”

Sanders also criticized the continued building of Jewish settlements on the West Bank and the economic blockade of Gaza. He condemned both Hamas’ rocket attacks into Israel and Israel’s bombing of hospitals, schools and refugee camps. He said that while Israel is a friend of the United States, “as friends, we are obligated to speak the truth as we see it. This is what real friendship demands, especially in difficult times.”

What does it mean to be “pro-Israel”? In 2009, J Street, a “pro-Israel, pro-peace” advocacy group, was founded to challenge AIPAC. It is led by Jeremy Ben-Ami, a former Clinton administration aide. It strongly backs a two-state solution and considers the Israeli occupation of Palestine to be a threat to democracy and Jewish values.

The Washington Post described the differences between AIPAC and J Street: “While both groups call themselves bipartisan, AIPAC has won support from an overwhelming majority of Republican Jews, while J Street is presenting itself as an alternative for Democrats who have grown uncomfortable with both Netanyahu’s policies and the conservatives’ flocking to AIPAC.”

In a 2014 article on AIPAC in The New Yorker, Connie Bruck describes how AIPAC was in conflict with Israeli Labor Party prime ministers Yitzhak Rabin and Ehud Barak and Democratic presidents Bill Clinton and Barack Obama.

In September 1993, Rabin and Yasser Arafat signed the Oslo Accords, which began a formal peace process with the Palestine Liberation Organization. AIPAC officially supported the agreement. However, Keith Weissman, a former analyst for the lobby, told Bruck: “AIPAC couldn’t act like they were rejecting what the government of Israel did, but the outcry in the organization about Oslo was so great that they found ways to sabotage it.”

In 1995, AIPAC encouraged new Speaker of the House Newt Gingrich to support bipartisan legislation to move the U.S. Embassy from Tel Aviv to Jerusalem. This created a dilemma for Rabin. He knew this would be popular with many Jews but also that such a move would enrage many Arabs and endanger the Oslo peace process. He told AIPAC leaders that he opposed the bill but they went ahead anyway. The bill passed overwhelmingly. Bill Clinton would invoke a national-security waiver to prevent its enactment. Bush Jr. and Obama did the same thing. But Trump decided to move the embassy.

Rabin would be assassinated in 1995 by a Jewish religious fanatic who was enraged by the peace process. Netanyahu ran for prime minister and people would yell “Assassin!” at his rallies because many felt that he had helped create a poisonous atmosphere with his vehement denunciations of Rabin and his peace policies.

Netanyahu didn’t get along with Clinton but his relations with Obama were much worse. He was allowed to denounce the Iran nuclear deal in an address before the U.S. Congress. He essentially campaigned against Obama’s re-election in 2012.

Now Netanyahu is running for re-election and is facing a massive corruption scandal. He claims he is the victim of a witch hunt and fake news by the media. He recently pushed three far-right parties to merge. One of them is Otzma Yehudit, which is the new name for the late Rabbi Meir Kahane’s old party, which was outlawed by the Israeli government as racist. The U.S. State Department listed the party as a terrorist organization. A supporter murdered 29 Palestinians at prayer in their mosque and the party praised him. Current leaders advocate the expulsion of all non-Jews from Israel, and the criminalization of Jewish-Arab relationships. This is Israel’s equivalent of the KKK.

The American Jewish Committee (AJC) released a statement condemning Otzma Yehudit. AIPAC tweeted that it supported the AJC’s condemnation. But neither the AJC or AIPAC condemned Netanyahu or even mentioned him. By the way, Netanyahu is scheduled to address AIPAC’s national conference March 24-26 in Washington D.C.