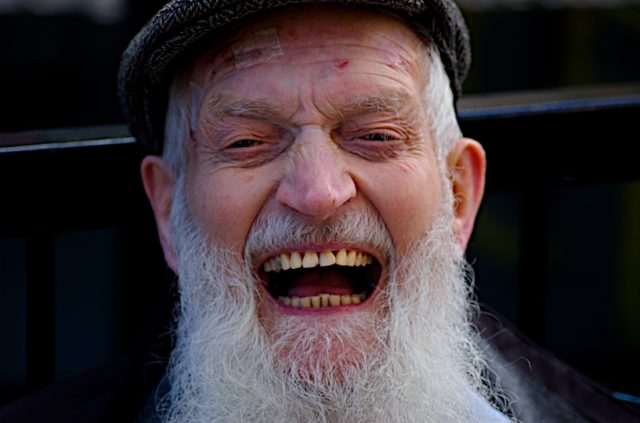 On April 15, a distinctly disturbing event took place in Berkeley, California. Several hundred proto-fascists gathered in a downtown park. They were armed and itching for a fight. Most of them were from out of town and many from all over the country. This was a pro-Trump Patriots’ Day rally for “free speech” organized online by a far right alliance of white supremacist/nationalist, alt-right, anti-feminist, neo-Nazi and militia groups.

Many wore masks. Quite a few performed the Nazi salute. Mother Jones reporter Shane Bauer said it seemed like many had only known each other on social media and were meeting in person for the first time.

He overheard discussion and debate of obscure far right positions. A man carried a sign saying “Da Goyim Know” which refers to a popular alt-right internet meme about how powerful Jews control everything and silence the critics who expose them.

They wanted revenge for an earlier event on the University of California campus. In February, a small group of rock-throwing masked Black Bloc leftists had forced the cancellation of a speech by Breitbart editor Milo Yiannopoulos.

On April 15, the far rightists and the Black Bloc fought each other for hours in the streets. At the end, 11 people were injured and six hospitalized. Police arrested 21 people on a number of charges.

The organizers of the rally, the Proud Boys, said they had won an “enormous victory.” On their Facebook page, the Proud Boys said they are “founded on a system of beliefs and values of minimal government, maximum freedom, anti-political correctness, anti-racial guilt, pro-gun rights, anti-Drug War, closed borders, anti-masturbation, venerating entrepreneurs, venerating housewives, and reinstating a spirit of Western chauvinism during an age of globalism and multiculturalism.”

McInnes was a Fox News commentator who left the network because it wasn’t conservative enough. He’s also a contributor for the racist website VDARE, where he belittled Muslims and called Asian Americans “slopes” and “riceballs.” He once received an award for “hipster racism.” Being a “hipster racist” involves engaging in behavior commonly regarded as racist and defending your antics by claiming you are just being ironic or satirical.

Most likely, the battle in Berkeley is only the beginning. The left will make a mistake if we get into a war with the far right, argues David Neiwert, an investigative journalist who has been reporting on neo-Nazis and fascist types in the Pacific Northwest for over 30 years. From his observations and from his reading of history, he says that fascists provoke violence by their enemies in order to portray themselves as victims.

Consider what happened in the last days of Germany’s democratically elected Weimar Republic in the 1930s. The country was in the middle of a political and economic crisis that left the society on the brink of civil war. Street violence by paramilitary organizations on the left and the right increased discernibly. Shortly before the July 1932 parliamentary elections, Prussian authorities reported 300 acts of politically motivated violence that left 24 people dead and almost 300 injured.

“The Horst Wessel Song” became the Nazi anthem. It lionized a 23-year-old storm trooper who was killed in 1930.

Neiwart says the most successful anti-fascist demonstration he ever observed occurred in 2005 in Olympia, Washington. A neo-Nazi group held a rally calling for a “race war.” The townspeople mocked them with a loud and mostly good-natured musical celebration of diversity.

Their noise drowned out the fascists on the loudspeakers. There was a troupe of clowns mimicking Nazis goose stepping around.

Don’t punch Nazis. Laugh at them.