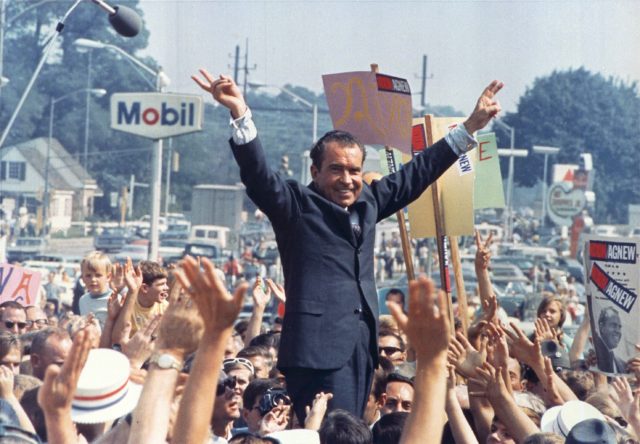 We’re finally on our own.

This summer I hear the drumming

Something ugly has been unleashed. As happened in the ’60s, history seems to have sped up. It is one damn thing after another. In the Democratic Party, the presumed nominee has been pulled to the left by a surprising demand for “political revolution.” In the Republican Party, the presumed nominee seems inspired by two candidates of 1968. Trump race baits and trades insults with hecklers like George Wallace but also revives a Nixon slogan with his mass produced signs saying “The Silent Majority Stands With Trump.” Nixon as president claimed a “silent majority” supported him (as opposed to noisy anti-warriors and militant blacks). Trump has a “secret plan” to defeat ISIS just as Nixon had a “secret plan” in 1968 to end the war in Vietnam. (More Americans and Southeast Asians would die under his presidency than under Lyndon Johnson.)

Trump supporter Ann Coulter tweeted a quote from Ronald Reagan in April 1970. He was the California governor then and was speaking before an agribusiness group. Referring to disruptive student protesters he said, “If it takes a bloodbath, let’s get it over with. No more appeasement.” Coulter tweeted this as a warning to protesters at Trump rallies.

Reagan would later claim that he didn’t utter those words but his speech was tape-recorded. As it turned out, there would be state-initiated murder on the campus of Kent State University in Ohio about a month later.

On May 4, 1970, national guardsmen abruptly ended an anti-war demonstration on that campus by firing into the crowd for 13 seconds. Four students were killed, two of whom were not even attending the rally. Nine were wounded, including one who was permanently paralyzed. On an audiotape, you hear one or more voices shouting, “Right here, get set, point, fire!” and the first shots ring out. A professor who had seen combat in the Korean war said, “It looked like a firing squad.”

The distances of the victims from the guardsmen ranged from 265 feet to 390 feet. The massacre sparked a nationwide student strike that closed many colleges and universities. A Nixon-appointed presidential commission would conclude that the shootings were “unnecessary, unwarranted, and inexcusable.”

Thomas Grace was one of the wounded. He is a retired social worker and union leader who is now an adjunct history professor at Erie Community College. He has written a comprehensive, evenhanded and massively researched history of the Kent State struggle entitled Kent State: Death and Dissent in the Long Sixties (Univ. of Massachusetts Press, Amherst and Boston, 2016, 384pp.) It isn’t a personal memoir, though he does provide a vivid account of his experiences on May 4 in a prologue and in sidebars to the description of the day. He has 80 pages of endnotes.

Grace challenges media-generated myths about the sixties New Left. Activism is supposed to have begun on the two coasts and by 1970 spread to a monolithically conservative Middle America. Grace emphasizes that Kent had a tradition of student political activism that extended back to Ohio’s labor struggles of the 1950s and to a decade of anti-war and civil rights/black liberation fights in the nation and on the campus itself.

After World War II, Kent State expanded and brought in growing numbers of working-class students from the industrial centers of northeast Ohio. Members of this same demographic cohort would make up the core of American combat forces in Vietnam.

In 1970, 10 percent of Kent State students had fought in Vietnam. The group, Vietnam Veterans Against the War, played an important role at Kent and around the country.

Grace says of the anti-war Vietnam veterans involved in the May 4 rally: “They had a great deal of difficulty processing how they could have fought a war in defense of their country and then come home and have armed agents of the state fire on them when they were unarmed.”

It’s been said that the “sixties” ended after the Kent State killings. Grace shows how the anti-war movement grew larger and more diverse at Kent State and around the country until Nixon had to give up.

He has a detailed appendix at the end about the fate of university’s activist generation. He concludes that, “Whatever they did in life, few, if any, betrayed the convictions they formed in the communities of their youth and on the campus of Kent State.” The vast majority remained actively committed to progressive social causes and incorporated these causes into their future life paths and careers.