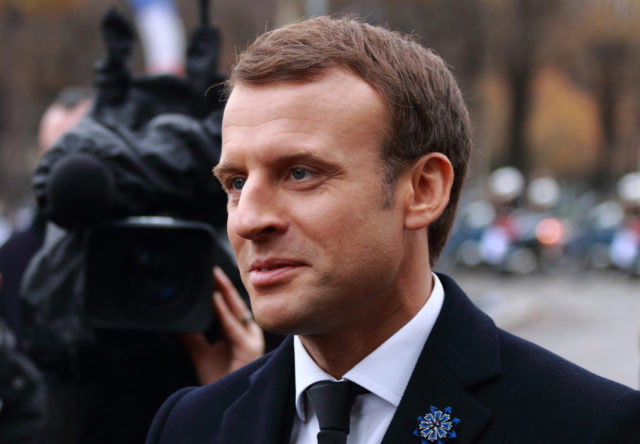 French President Emmanuel Macron returned to Paris from the G20 Summit, where he reaffirmed France’s commitment to the Paris Climate Accord, to discover a rebellion against it underway in Paris.

Hundreds of thousands ran riot in the capital and protested throughout the country, more than 400 were arrested in Paris alone, more than 260 were injured, and two were killed… streets blocked, shops attacked, graffiti painted on the Arc de Triomphe, water canon turned on crowds, and so on.

The cause of the rebellion was an increase in the national gas and diesel tax — that was imposed explicitly to combat global warming by reducing driving.

You couldn’t ask for a better juxtopositon of the disconnect between how the Global Climate Consensus perceives global warming and how, uh, les deplorables (aka more than 75 percent of France’s population) see it.

The tax amounts to about 30 cents a gallon on already heavily taxed diesel, raising the price of a gallon of the fuel to around $7. There was a smaller increase in the tax on gasoline, but diesel is the more commonly used fuel in France.

It might seem odd that a 5-percent tax increase on diesel would set off a mushrooming national rebellion that shows signs of turning into a revolution, but then in 1773 the Tea Tax (three pence a pound) didn’t seem like all that much either — to the Brits, that is.

And there’s nothing odd about the pushback Macron got when you consider:

Existing taxes in France add up to 45 percent of the country’s GDP, the highest in the Western World.

Add to that the fact that Macron has the political skills of Marie Antoinette, or worse, Hillary Clinton.

According to Milliere, he once referred to the female employees of a bankrupt company as “illiterates,” made a distinction in a speech between “those who succeed and those who are nothing,” told a young man who spoke of his distress at trying to find a job that all he had to do was move and “cross the street,” and that his fellow countrymen were “Gauls resistant to change.”

Some journos are characterizing the protests as a “rural versus urban” thing, with les deplorables being the rurals, who are dependent on their cars, while the well-off urbans can use public transportation.

They may have a point, but that doesn’t explain the fact that several polls have shown the Yellow Vest Movement (Mouvement des Gilets Jaunes) has the support of more than 75 percent of the country.

Pundits all over the world are writing columns about the “deeper” grievances in France that led to the protests — everything from the high cost of living, high unemployment, low economic growth, immigration, and so on.

The reason “solutions” to global warming like Macron’s fuel tax are furiously rejected by les deplorables isn’t because the deplorables are ignorant or self-absorbed or have other grievances. It’s because the sacrifices they’re being asked to make offer no visible solution to the problem.

The tax will produce no discernable difference in the climate, because in addition to the warming that is baked in due to the carbon dioxide released since the start of the industrial revolution, tens of billions more tons of greenhouse gases will be released annually for decades, until current fossil fuel energy production is phased out (if ever, that is).

Then there’s the matter of the tax being explicitly anti-automobile.

The automobile is one of the most potent instruments of personal empowerment and liberation ever put in the hands of ordinary people. And Macron wants to take that empowerment and freedom away, in pursuit of a policy that won’t produce results for centuries. No wonder les deplorables want his head (which in France is a fraught metaphor).

Last Tuesday, Macron suspended the fuel tax for six months, in the hopes that would cool things down, so to speak. He would have been better off cancelling it; the suspension is more likely to cause the Gilets Jaunes to double down. We’ll see this weekend.

Granted, the French seem to stage this sort of rebellion every 50 years or so, but American environmentalists who airily call for a carbon tax should still take the Gilets Jaunes movement as a cautionary tale.

Global warming may or may not be settled science, but it most emphatically isn’t settled politics. And that’s an inconvenient truth that can’t be ignored.