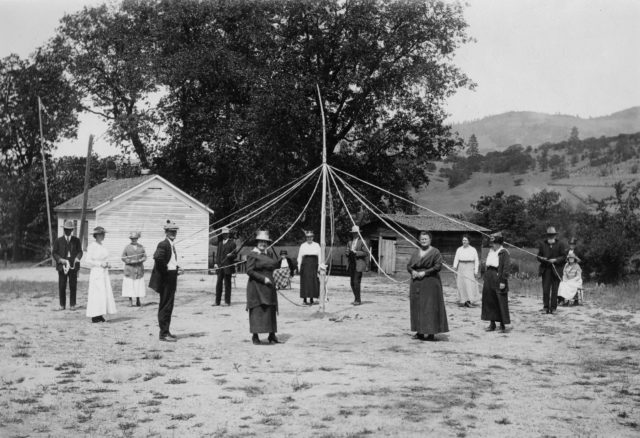 With total control of the federal government, Trump and the Republicans have encountered remarkably massive resistance as they begin to roll back decades of hard-won gains for race and justice, worker and union, environment, consumer and LGBTQ rights. We are sending out the international distress message of  “Mayday! Mayday! Mayday!”

In fact, many resisters are going to celebrate May Day this year. It is “International Workers Day” in over 200 countries (and is a national holiday in over 80) but not in the United States.

In Boulder, there will be a rally for labor and immigrant rights on May 1 at 5:30 p.m. at the downtown bandshell at Broadway and Arapahoe. The event is hosted by Fairview High School’s Students for a Democratic Society, Keep Colorado Green and Boulder Democratic Socialists of America.

May 1 will also be “A Day Without Immigrants,” a strike led by immigrant rights group Movimiento  Cosecha.

You might be surprised to learn that May Day was actually born in this country. It arose out of the turmoil of  an unstable and unregulated small government along with 19th century capitalism which produced many booms and busts. In the 1880s, there was a severe economic depression which caused sharp wage reductions and high unemployment.

In 1886, there was a nationwide  general strike by labor unionists — most of them foreign-born — who demanded an eight-hour workday. This was considered a wildly dangerous idea by respectable folk because workers typically had to toil for 10, 12 or 14 hours a day. The strike was called by two organizations, the skilled trades-dominated Federation of Organized Trades and Labor Unions (the forerunner of the American Federation of Labor) and the Knights of Labor.

Historian James Green says, “What happened on May 1, 1886 was more than a general strike; it was a ‘populist moment’ when working people believed they could destroy plutocracy, redeem democracy and then create a new ‘cooperative commonwealth.’”

A few days later, workers in Chicago staged a peaceful rally in Haymarket Square to protest the police murder of several strikers at the McCormick Reaper Works. The event was concluding when cops marched into the crowd, demanding that everyone go home. Someone threw a homemade bomb at the police, killing one. In the chaos, at least a dozen people were killed, including six more cops, all from gunshot-related wounds.

A huge  national witch hunt against labor and the left ensued. Police raided labor union halls without warrants, seized files and invaded homes. Individuals were held without charges, beaten and tortured. Police indiscriminately rounded up anarchists and socialists. The color red, the symbol of revolution, was banished from public advertising.

The Chicago Tribune demanded the deportation of immigrants it labeled “ungrateful hyenas” and “foreign savages who might come to America with their dynamite bombs and anarchic purposes.” The Chicago Times said the “enemy forces” were not American but “rag-tag and bob-tail cutthroats of Beelzebub from the Rhine, the Danube, the Vistula and the Elbe.”

Several anarchists were put on trial for the crime. Every one of the jurors admitted being prejudiced against the defendants. The defense proved that six of the eight defendants weren’t present when the bomb was thrown, and that the remaining two were on the speakers’ stand, in full view of the police.

But the prosecutor claimed that the identity of the bomb-thrower was immaterial. He said the defendants had made inflammatory statements about the need to overthrow capitalism by any means necessary, and that was enough. “Convict these men,” he cried. “Make examples of them, hang them, and you save our institutions.”

Four of the defendants went to the gallows, three were sentenced to long prison sentences and one committed suicide in his cell. Five of the eight defendants were German-born immigrants and one was born in England. Another was a U.S. citizen of German descent. Then there was Albert Parsons a descendent of Puritan settlers in colonial Massachusetts. During the Civil War, Parsons joined the Confederate Army while a 13-year-old in Texas but became disillusioned and deserted.

He married Lucy Gonzalez who may have been born a slave, to parents of African American, Mexican and Native American ancestry.

Parsons became a radical Republican and mobilized freed slaves to vote in Texas. He was targeted for persecution by the KKK and the authorities. Eventually Albert and Lucy moved to Chicago where he became an organizer for the Knights of Labor.

The Haymarket defendants would become martyrs for many working people. In 1893, Illinois Governor John Altgeld would pardon the three men still alive. But the bosses would evoke the spectre of the Haymarket bomb to crush the labor movement. Labor’s day was moved to September. In many ways, labor unions in the U.S. would be outlaw institutions until FDR became president. Then finally in 1938, the eight-hour day would become federal law.

The fight goes on. This May Day is an opportunity to unite all the movements and communities resisting the Trumpian madness.