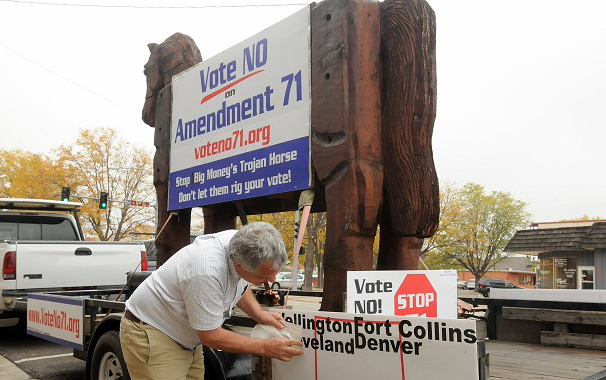 Colorado Amendment 71, Raise the Bar, passed in the November election.

It will now take a 55 percent supermajority to amend the state constitution.

Amendment 71 was designed to stop the young, poor and powerless from having any say in the political arena. Current Governor John Hickenlooper and ex-Governor Wellington Webb tag teamed with Republican football legend John Elway, funded by millions of oil and gas dollars.

Amendment 71’s requirement of 2 percent petition signatures from each of Colorado’s 35 senate districts is a death knell for initiatives by people of ordinary means; but anyone with a million dollars to spare can just hire a canvassing firm to get their initiative on the ballot.

Colorado elected officials, Democrats and Republicans alike, have fought people’s right to make law for over 100 years. In protecting oil and gas operations, they also stop many progressive causes from making the ballot. In their minds, only legislation that gets out comes from the state capitol.

Since the new law requires signatures from voters in all corners of the state, let’s at least have a state-wide petition signing system. The current system, paper packets, hand-written entries, manual (and randomly-sampled) signature verification is 20th century at best. In an age when I can register to vote and change my party affiliation online at the Secretary of State’s site, I ought to be able to sign a petition for a ballot measure.

There would be benefits: I would not have to find a canvasser for a particular initiative on some street corner. I could research an initiative and make an informed decision about signing, instead of having to decide on the spot, on the street, under the gaze of a solicitor who will get paid if I sign. The cost and time needed to gather signatures would plummet, making the citizen initiative process available to citizens of ordinary means. Finally, the integrity of electronically collected and verified signatures would be vastly improved; voters’ registration information would be validated as part of the process of signing online. Duplicate signatures (which often happens inadvertently) would be detected in real time and would not be permitted.

Finally, I believe this a generational thing the older generation doesn’t want to change for the most part while the younger generation does want change. Amendment 71 sure throws a rock in the gears for progressive change.