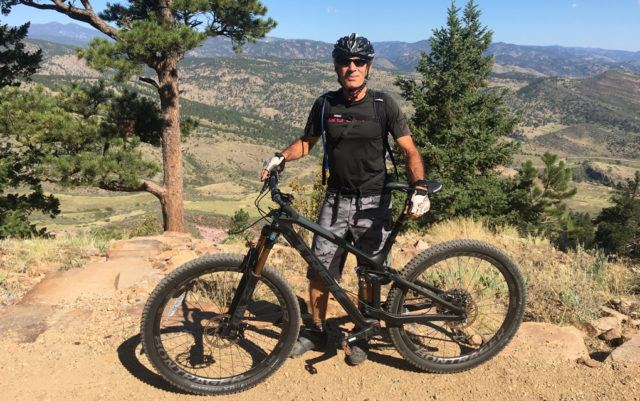 As an avid cyclist who rides the trails and roads adjacent to Boulder almost every day, I read with great interest Matt Cortina’s article, “Crash Course,” in the Sept. 28 edition of Boulder Weekly. In his piece, Cortina cites statistics that reveal there were more cyclist and pedestrian deaths in 2016 than in the previous four years combined, which should be of great concern to the community. Cortina then goes on to outline the causes of car-bike collisions, ranging from the failures of cyclists to adhere to the rules of the road to the “animosity,” to use Cortina’s word, that exists between cyclists and motorists. It is the latter cause I want to highlight.

To begin with, let’s get one thing clear: Cyclists do not have “animosity” toward motorists. The problem here is the animosity motorists display toward cyclists. As I mentioned in the opening paragraph, I have far more than just anecdotal experience to draw from in making this claim. As someone who logs an average of more than 200 rides and some 4,000 miles per year, I’m here to tell you that I have never once witnessed an incident of a cyclist expressing animosity toward a motorist — and here’s the kicker — that was not first triggered by the inappropriate behavior of the motorist. You see, it is when a motorist fails to conduct himself appropriately when coming across a cyclist that the problem begins. (Note: I am intentionally using the male-specific form of the pronoun, as this is primarily, but not exclusively, a gender-specific phenomenon.)

For reasons that remain perplexing to cyclists (virtually all of whom, by the way, are also motorists and, therefore, understand this issue from both perspectives), many motorists display what can best be described as a sense of “vehicular privilege,” a form of bigotry that belies the equal legal rights that cyclists have to our roadways. Under the mantle of vehicular privilege, motorists assume “ownership” of the roads, and those pesky cyclists had better stay out of their way (read: not cause even a five-second delay in their arrival at their destination) if they want to use “their roads” and not be taken to task.

And how do those suffering from vehicular privilege take a cyclist to task? There are several ways that these motorists express bigotry toward cyclists, but I will focus on the two most popular expressions of vehicular privilege: insufficient passing margin and unnecessary use of the horn.

In the case of insufficient passing margin, the motorist passes the cyclist, often without reducing speed, without allowing the requisite 3-foot margin. (Note: According to the Colorado Department of Transportation’s “Bicycle Safety Act” of 2009, motorists are required to “allow at least 3 feet between [their] vehicle and the bicycle” when passing.)Granted, there may be times when the motorist is ignorant of the law, which is still inexcusable. But many times, this passive-aggressive act is an intentional expression of vehicular privilege.

And then there is the unnecessary use of the horn. To be clear, I’m not talking about the quick beep that is intended to inform the cyclist that a car is about to pass. (Although, I would add that such a beep also falls into the “unnecessary” category; we hear you coming and know you’re about to pass, and we don’t need you to honk at us to announce yourself.) No, I’m talking about the extended, anger-laden assault that will cause a cyclist’s heartrate to instantly rise from the aerobic into the anaerobic zone, no matter how leisurely the pace or level the grade.

In many cases, motorists feel justified in utilizing these aggressive acts to take cyclists to task for not riding far enough to the right or for riding two abreast. But again, these motorists are either ignorant of the law or flexing the muscles of their perceived vehicular privilege. The fact is that, by law, cyclists have as much of a right to use the roads as motorists. Again, citing the relevant sections of the CDOT Bicycle Safety Act: “…when a road is too narrow for cars and bikes to ride safely side by side, bicyclists can legally ride in or near the center of the lane…” and “…riding no more than two abreast is permitted when riding two abreast will not impede the normal and reasonable movement of traffic,” and finally, “…don’t honk your horn. You could startle the cyclist into an accident.” I can’t begin to count the number of times when a cycling partner and I have been riding side-by-side, with 75 percent of the road available for passing to our left, that we have been loudly honked at and sped by at a distance that could only be interpreted as an act of hostility.

As a cyclist, hostility and aggression from motorists is palpable, and the feelings of fear and insecurity — while already in the vulnerable position of being a cyclist on a road shared with vehicles weighing an average of 4,000 pounds, while your vehicle weighs literally one-half of 1 percent of that amount — are real and extremely unpleasant, and potentially dangerous.

As we elect a new City Councils this year, I am calling upon our new leaders to consider adopting increased measures to ensure the safety of our cyclists, much as many other communities across the country are doing. Just this past week, Delaware Governor John Carney signed into law the “Bicycle Friendly Delaware Act,” which addresses the issues connected to cyclist safety in a sensible and progressive manner. Under this new group of laws, motorists are required to change lanes — including when there is a double yellow line — when passing bicycles under circumstances in which doing so would ensure the safety of the cyclist. Another provision is referred to as the “Delaware Yield” (also in place in Idaho under the name “Idaho Stop”), which permits cyclists to yield at stop signs, rather than requiring them to come to a complete stop when the intersection is clear. And, finally, the Bicycle Friendly Delaware Act prohibits motorists from honking their horns at cyclists, except in the case of imminent danger.

These kinds of measures will only be effective, however, if accompanied by a change in attitude among motorists toward cyclists. Few motorists question the wisdom or propriety of observing reduced speeds and exercising increased caution when driving in a school zone. The reason: We all agree that children are vulnerable and need extra protection. Consequently, those of us who find ourselves driving through a school zone — or anywhere else in the presence of children — willingly adopt a protective posture with respect to their safety. The last thing any of us would do (at least I would hope) in the presence of children is resent their presence and act aggressively toward them by speeding by too closely or honking angrily at them.

Similarly, motorists need to understand the vulnerability associated with being a cyclist and adopt a protective attitude toward them. Or, to rephrase the well-known neighborhood sign: Drive like your children are riding here.