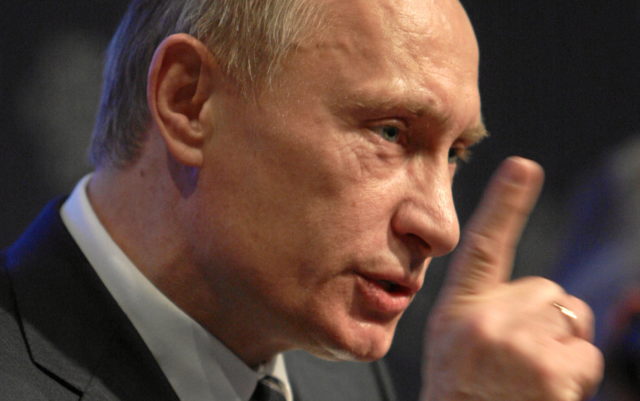 Vladimir Putin’s invasion of Ukraine is shocking but how surprising is it? British investigative journalist Carole Cadwalladr said on Twitter, “We failed to acknowledge Russia had staged a military attack on the West. We called it ‘meddling.’ We used words like ‘interference.’ It wasn’t. It was warfare. We’ve been under military attack for eight years now.”

Is that too hyperbolic? For several years, Cadwalladr has written about what she calls the“Great Information War” by Russia. She isn’t just referring to what happened during the U.S. presidential campaign in 2016 but also about similar behavior in European countries such as Great Britain, France and Germany.

Putin’s sudden and reckless barbarity in Ukraine provokes questions about what he is up to. Gleb Pavlovsky, Russian political scientist who was a former advisor and confidant of Putin provided disturbing  insight in a 2014 interview in the British magazine ‘New Left Review’:

“Putin is a Soviet person who did not draw lessons from the collapse of Russia. That is to say, he did learn lessons, but very pragmatic ones. He understood the coming of capitalism in a Soviet way. We were all taught that capitalism is a kingdom of demagogues, behind whom stands big money, and behind that, a military machine which aspires to control the whole world. It’s a very clear, simple picture which I think Putin had in his head—not as an official ideology, but as a form of common sense. His thinking was that in the Soviet Union, we were idiots; we had tried to build a fair society when we should have been making money. If we had made more money than the western capitalists, we could have just bought them up, or we could have created a weapon which they didn’t have. That’s all there is to it. It was a game and we lost, because we didn’t do several simple things: we didn’t create our own class of capitalists, we didn’t give the capitalist predators on our side a chance to develop and devour the capitalist predators on theirs.”

During the Soviet era, Pavlovsky was persecuted as a dissident. In a 2018  article on how the Kremlin turned Putin into a global icon,  Washington Post  reporter Anton Troianovski described Pavlovsky as “a key architect of Putin’s public persona until he feuded with and cut ties to the Kremlin in 2011.”

He told Troianovski that they deliberately cultivated an air of mystery around Putin. In a weak state like Russia, “you need to create an image of power” he said. Putin became a Hollywood-style tough-guy action hero. He was an anti-establishment figure designed to appeal to people on the right and the left.

Putin was the world’s first modern “strongman,” his longtime spokesman Dmitry Peskov told The Post, emphasizing  that he saw that word in a positive light. He said, “There’s a demand in the world for special, sovereign leaders, for decisive ones who do not fit into general frameworks and so on. Putin’s Russia was the starting point.”

There’s Xi Jinping in China, Viktor Orban in Hungary and Rodrigo Duterte in the Philippines. “There’s getting to be more of them all over the world,” Peskov said. “Trump in America, too.”

Troianovski noted that in Germany, far right activist Sven Liebich was selling thousands of Putin T-shirts, “the most popular one featuring a smirking, sunglasses-wearing Russian president, his head Photoshopped onto a muscular, tattooed torso, giving the viewer the finger.”

This ridiculous PR campaign is somewhat amusing but it has been effective. Somehow I’m not laughing. Fortunately, the Russian propaganda machine is less successful in Ukraine than it was in Syria. The international news media is on the ground in Ukraine  and paying attention to the massacre of white Europeans. Ukrainians also have cell phones. Russia’s horrific war crimes in Syria weren’t noticed as much.

In his interview, Peskov cheered the increasing number of “strongman” autocratic regimes. There is an implicit alliance between them. Will they rally behind Putin? There’s Saudi Arabia’s Mohammed bin Salman (MBS), who rules over a much worse dictatorship than Russia. The U.S. has had a cynical alliance with the Saudis for decades since they provide us with oil.

The CIA concluded that MBS personally ordered the assassination of Washington Post columnist Jamal Khashoggi. There is audio and visual evidence of Khashoggi being cut into pieces while he was still alive. MBS had a chummy relationship with Trump but Obama and Biden hurt his feelings because they have criticized his human rights abuses. Biden recently called MBS to ask him to increase oil production in order to lower prices. MBS refused to take his call but did take one from Putin.

The 2022 and 2024 elections are crucial for the future of our democracy. It would be great if the global showdown between democracy and authoritarianism was totally unambiguous. The democratic countries are deeply flawed, compromised and too often hypocritical. But the battle is real.