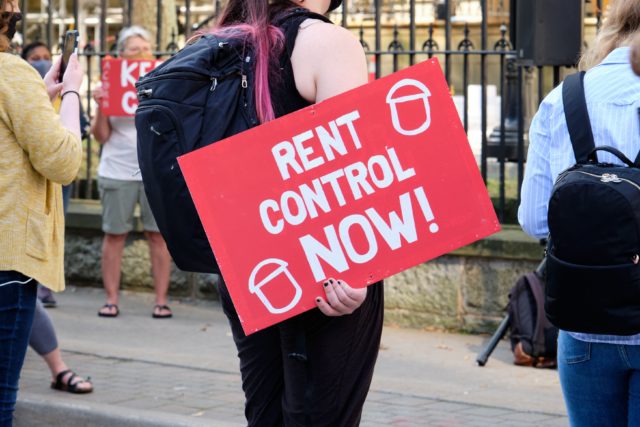 While the economic noose tightens around Colorado renters as they suffer through ever worsening rent hikes, the strictest rent control (RC) measure in the country went into effect a few days ago. In a sparsely covered election result last year, St. Paul, Minnesota voters passed a law capping all rents at 3%. And while virtually all other RC cities exempt new construction (to the consternation of activists and tenants), the new St. Paul law will not exempt new construction. Additionally, this law will not allow vacancy decontrol, a method landlords use to increase rent to whatever they want when a tenant moves out.

The three-year effort to pass this law by a coalition of community and neighborhood groups was vastly outspent, but had broad support from tenants and their supporters and ultimately from many homeowners.

In spite of it passing by a comfortable margin, there are ongoing efforts by the St. Paul city council and their allies (landlords, realtors and homebuilders) to undo or weaken the measure, which went into effect several days ago.

According to the city’s website, “The Residential Rent Stabilization Ordinance, approved by St. Paul voters in November 2021, limits monthly rent increases to 3% in any 12-month period even when tenant(s) move out. The ordinance is intended to ensure that St. Paul residents have access to affordable housing, while also acknowledging  property owners’ right to a ‘reasonable return on investment.’”

But opponents on the St. Paul city council, along with the mayor, have modified the rent cap.

The online publication Twin Cities Pioneer Press reports, “Landlords seeking to increase rents more than 3% but less than 8% can ‘self-certify’ such requests by submitting an intake form to the city. Larger increases would require an appeal to a city hearing officer.” These hardship requests would require landlords to justify that exemption and can include property taxes, repairs and maintenance, utility costs (if paid by landlord), fees, etc.

While the St. Paul mayor admitted the RC measure has strong support from voters, he wants to see the law weakened to exempt new construction and allow for vacancy decontrol. RC proponents have pushed back. Perhaps as a result, he recently created a 41-member rent stabilization stakeholder group of tenants, landlords, realtors, non-profit and community groups and residents.

Knowing there would be efforts to gut the law, RC proponents wisely added a provision that would prohibit city council from overturning the law for at least a year.

Next door in the larger city of Minneapolis, the way is clear for voters there to pass a rent stabilization law next year. Housing activist groups (and the landlord industry) around the country are watching what happens there. And we in Colorado can watch with envy—but perhaps get inspired.

In my April 7 column (see The Unrepentant Tenant, “The downward mobility of owning a mobile home,” April 7, 2022), I was optimistic because a bill that would help MHOs passed out of committee. It had a lot of protections for some of Colorado most vulnerable population, but the one that drew the most fire regulated skyrocketing rents on mobile home lots. In spite of knee jerk reactions against all forms of rent control, the bill passed out of committee with the rent control provision intact.

But our Boulder-based multi-millionaire governor put a stop to that, much to the relief of Republicans and landlords/mobile home park owners everywhere. He threatened to veto the entire bill if the RC provision wasn’t stripped out of it.

In a painful decision, the bill sponsors and supporters felt the other protections were too important to risk a certain veto and pulled that provision. There’s a fairly good chance it would have passed the full House and Senate, even with all Republicans opposing it—but it probably wouldn’t have passed by a veto-proof majority.

To be clear, his veto threat was aimed at mobile home owners—not tenants directly. But there’s a 99% chance he would make the same threat if a bill trying to repeal the ban on rent control for the much larger population of residential tenants, ever got close to him.

Polis is almost certainly a libertarian at heart and has been progressive on a number of other issues. But he has proven to be a big friend to Republicans and other economic conservatives by opposing unions, more progressive tax policy, and now rent control.

So, here’s the bigger point: Since Polis seems to despise rent control and the Dems seem unwilling and/or unable to go up against him, there’s virtually no chance for a repeal of the ban on RC this year. If he wins re-election this November, that means it’s unlikely the ban on rent control will be repealed until at least 2026.

In other words: a multi-millionaire who says local governments should decide on mask mandates has no patience for those same entities making their own decisions about affordable rental policy.