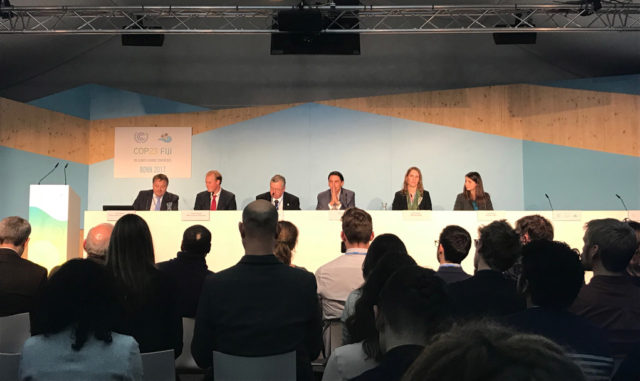 President Donald Trump’s attempt at pushing a fossil fuel agenda at this year’s 23rd United Nations climate talks (COP23), includes coal, oil, nuclear and natural gas. The only official White House event at COP23, held this past Monday evening, titled “The Role of Cleaner and More Efficient Fossil Fuels and Nuclear Power in Climate Mitigation” was attended by a small handful of bureaucrats and hundreds of everyday people from across the world. However, the majority of those attending were not in support of Trump’s agenda, but in protest of it. As I stood in the security line waiting to get into the event room, which only housed a little over 200 people, my heart was beating fast; I’m just an ordinary young person born, raised and still living in Boulder. What role did I have in standing up to the Trump administration at their single event at this global climate summit?

Good thing I’m not alone here. Seven out of 10 Americans support urgent climate action and staying in the Paris Agreement. I came here with SustainUS, a delegation of 15 young people from around the country, who led the action against Trump’s dirty fossil fuel agenda on Monday evening. This year we formed the People’s Delegation, where indigenous peoples, youth, advocates and frontline communities have united to create a larger collective to counter the Trump Administration’s fossil fuel agenda and hold U.S. states, cities, businesses and the public accountable to real and just climate solutions.

Monday evening was a moment I’ll remember for the rest of my life, and one that, I hope, becomes a defining point throughout history when the people declared “No More” to being bullied by corporate elites for profit. Representing the interests of everyday Americans, we the people, stood in our full dignity and power, filling the U.S.-backed event with at least 100 voices. About 20 minutes into the fossil fuel panel, stacked with representatives from Peabody Coal and the Trump administration, two-thirds of the entire room stood up all at once and broke into a beautiful rendition of “God Bless the USA.” Voices filled the cold room, “So you claim to be an American/ But we see right through your greed/ It’s killing across the world, for that coal money./ So we proudly stand up to keep it in the ground/ Cause the people of the world unite, and we are here to stay.”

Midway through the song, I looked back at the administration’s baffled faces, as I quickly unfurled a banner that read “We the People” with the words “fossil fuel CEOs” crossed out at the top of it. My voice was shaking, but I still sang truth to power because the urgency of this climate crisis requires it. After singing for about 10 minutes, security escorted us out. Everyone left, leaving the event audience area nearly empty, only occupied by a handful of journalists and White House guests, the panelists speaking to themselves. Walking out of the event doors into a crowd of over 200 people, I started to tear up.

While we came together in a momentous action to declare “no more” to the efforts of the U.S. government to obstruct climate action, our work doesn’t stop here. Wealthy fossil fuel CEOs are still wreaking havoc at home and abroad. While it’s clear that the Trump administration has isolated itself in the global context, our state politicians must do more to fight climate change. As I’ve seen fracking come into my community, I’ve watched local politicians such as Gov. Hickenlooper continue to be in bed with fossil fuel executives. While these high-level talks happen at a global level, the destruction of the communities I care about continue to be destroyed by fracking. Gov. Hickenlooper must follow through on his commitment to stay in the Paris agreement by banning fracking and supporting a just transition away from fossil fuels, especially for those who work in the fossil fuel industry. By continuing to ignore the realities of burning and drilling for dirty energy, Gov. Hickenlooper is succumbing to the interests of the 1 percent, not the people. By increasing fracking, Colorado isn’t taking the proper steps that would keep temperatures below 1.5 degrees warming, necessary for meeting the goals of the Paris Agreement. This threatens not just the future of our entire generation, but continues to put wealth in the hands of a select few fossil fuel CEOs who will never stand for the interests of everyday Americans from all walks of life.

Michaela Mujica-Steiner, born, raised, and living in Boulder, is the Mobilization Lead on the SustainUS Youth Delegation to the 23rd UN Climate talks and a member of the People’s Delegation.