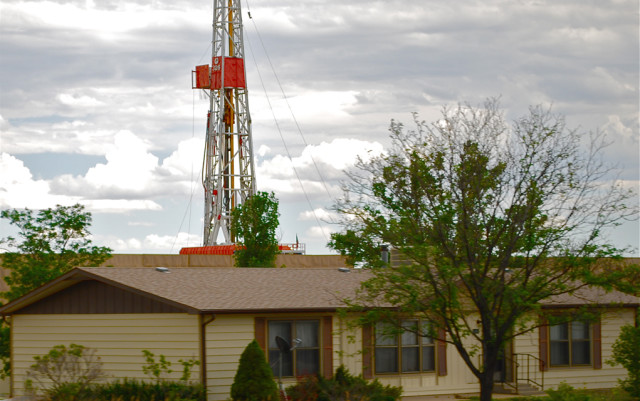 Connecting dots is generally considered to be a child’s game. But when applied to politics and all of its bedfellows who usually come out at night when the sun isn’t shining, it is far from child’s play. What is going on in Colorado, both out in the open and behind closed doors at the higher, indeed the highest, levels of state government, is stomach churning.

I’ve been at the forefront of the fracking issue since late 2011 when fracking for oil and gas was barreling down on Longmont (pun intended) with only a month to stop an inevitable train wreck. Permission would have been granted by the Planning and Zoning Commission with the public essentially knowing nothing until the first rig went up. Even council members (some, but perhaps not all) would have been unaware.

The people of Longmont essentially said “hold your horses; we want a closer look at this.” Longer story short, Longmont voters passed a charter amendment that banned fracking and the disposal of its waste products in November 2012 with a 60-40 percent mandate. The oil and gas industry sued Longmont and the state quickly joined in on the bullying under Governor Hickenlooper’s orders.

While the ongoing battle continued to play out at the ballot box in surrounding communities, state representatives, Mike Foote and Jonathan Singer, and state senator, Matt Jones, have not only listened to their constituents but also have gone to bat for all of the folks who are a far cry from powerful and obscenely wealthy special interests.

Backroom discussions, phone calls, after hour drinks, etc. — all not open to public scrutiny — likely play a big part in thwarting every bill brought forward that is connected to oil and gas, even those that do not say oil and gas overtly. (Watch for coming additional hits on citizen democracy on November’s ballot.)

In spite of the state constitution and previous court rulings (specifically Bowen/Edwards in 1992, which does not give blanket preemption to the state over oil and gas control as the industry insists), facts are relentlessly distorted and the propaganda spews forth from Republicans as well as a few Democrats like the dirty energy from wells.

We are deafened with lies and statements deliberately taken out of context that paint the legal environment with black oil and toxic methane emissions. Those are hard to see on the canvass; look for the brown cloud and the infrared camera fumes that are painted in gray tones. All accomplished without a second’s chagrin and likely high fives in the hallways of the people’s building.

Recent examples are Representative Mike Foote’s HB 16-1355, which sought to grant oil and gas zoning authority to local governments, as is the case with every other business and industry. Amended to nearly meaningless on the day of the vote, it still couldn’t pass the House. And you can thank Democrats Ed Vigil and Paul Rosenthal for the deciding votes.

Representative Joe Salazar’s HB 16-1310 would hold oil and gas companies and operators liable if their activities cause an earthquake that results in harm to an individual or to property. Fair? Right. Common sense? Right. But you guessed it. Colorado Public Radio reported that our dear Governor Hickenlooper said he would not sign this bill, speaking at an American Petroleum Institute luncheon — naturally.

Coloradans who still believe that the state government will protect their health, safety, welfare and property values need a stiff cup of espresso each and every morning to help them accept the truth.

If we want change, if we want our health and safety protected, we will have to do it ourselves. “Yes for Health and Safety over Fracking,” (yesforhealthandsafety.org) the issue committee of Coloradans Resisting Extreme Energy Development, will soon be on the streets asking for your signature on state petitions that will amend Colorado’s constitution to guarantee our health and safety. Grab that pen and sign.

Kaye Fissinger is President, Our Health Our Future Our Longmont.