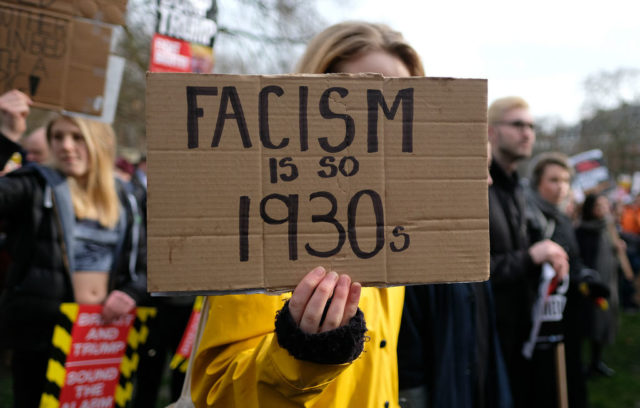 We are witnessing an explosive revival of the far right across the globe. It is happening in Europe, Latin America, Russia, the Middle East and Asia. But it is particularly ominous that it is also happening in the United States, the dominant and oldest democracy, after the election of  Donald Trump.

Last month, U.S. Senator Bernie Sanders and Yanis Varoufakis, the former finance minister of Greece, launched Progressive International, which hopes to create a united front against the far right by mobilizing “a global network of individuals and organizations that will fight together for dignity, peace, prosperity and the future of our planet.” They issued a call to action:

“There is a global war being waged against workers, against our environment, against democracy, against decency.

“A network of right-wing factions is collaborating across borders to erode human rights, silence dissent, and promote intolerance. Not since the 1930s has humanity faced such an existential threat.

“To defeat them, we cannot simply go back to the failed status quo of the last few decades. Unfettered globalization promised peace and prosperity. But it delivered financial crisis, needless war, and disastrous climate change, instead.”

The announcement was delivered at an inaugural three-day event in Burlington, Vermont, by a new think-tank called the Sanders Institute, which is led by the senator’s wife, Jane O’Meara Sanders. She said that the Institute was founded in 2017 but the gathering was deliberately held after the midterm elections:

“The Democrats took back the House, so the ideas that we’re coming up with have more of a shot of being brought forward in the House and even possibly pass depending on how strong the progressives are and that will help us in terms of moving the principles and the values and ideas that we have forward.”

Speeches and panel discussions dealt with winning Medicare for All, solving the climate crisis with a Green New Deal, reforming the criminal justice system and creating affordable housing.

Shortly after the gathering, Katrín Jakobsdóttir, Iceland’s Prime Minister, announced on Facebook her support for Progressive International because it represents “the struggle for general welfare, security, and dignity for all people,” and that a trans-border network of those on the left would help “alleviate social and economic inequality, make changes to the global financial system, turn away from the arms race, and stop climate change.”

Jakobsdóttir, who’s been described as “the anti-Trump,” is the leader of Iceland’s Left-Green Movement, which is in a coalition government with two more conservative parties. John Nichols of The Nation notes that she is “the first elected head of state who comes from a new breed of Nordic left-wing parties that link democratic socialism, environmentalism, feminism, and anti-militarism. She is, as well, one of a number of young left-leaning women who have emerged as prime ministers and party leaders in countries around the world at the same time that the United States has been coming to grips with the defeat of Hillary Clinton and the election of Donald Trump.”

In 2018, a record number of women were elected to office in the U.S. But we still have a lot of catching up to do. Americans have a problem hearing that we can learn from the experiences of other countries. Politicians are always telling us that we are the greatest and most wonderful country on the planet. This arrogant notion that we are an isolated shining city on a hill is a dangerous delusion. We are not immune from the forces of history.

It can happen here. America can become fascist.

In September, Bernie Sanders and Yanis Varoufakis wrote a pair of op-eds in the Guardian about the need for a Progressive International. Sanders asked:

“Three years ago, who would have imagined that the United States would stay neutral between Canada, our democratic neighbor and second largest trading partner, and Saudi Arabia, a monarchic, client state that treats women as third-class citizens? It’s also hard to imagine that Israel’s Netanyahu government would have moved to pass the recent ‘nation state law’, which essentially codifies the second-class status of Israel’s non-Jewish citizens, if Benjamin Netanyahu didn’t know Trump would have his back.

“All of this is not exactly a secret. As the U.S. continues to grow further and further apart from our longtime democratic allies, the U.S. ambassador to Germany recently made clear the Trump administration’s support for rightwing extremist parties across Europe.”

Varoufakis said that fascism can become attractive to desperate people:

“Our task is not unprecedented. Fascists did not come to power in the mid-war period by promising violence, war or concentration camps. They came to power by addressing good people who, following a severe capitalist crisis, had been treated for too long like livestock that had lost its market value. Instead of treating them like ‘deplorables,’ fascists looked at them in the eye and promised to restore their pride, offered their friendship, gave them a sense that they belonged to a larger ideal, allowed them to think of themselves as something more than sovereign consumers.”

But he says, “That injection of self-esteem was accompanied by warnings against the lurking ‘alien’ who threatened their revived hope.” Progressives can offer a positive alternative to both the fascists and the establishment — a global Green New Deal.