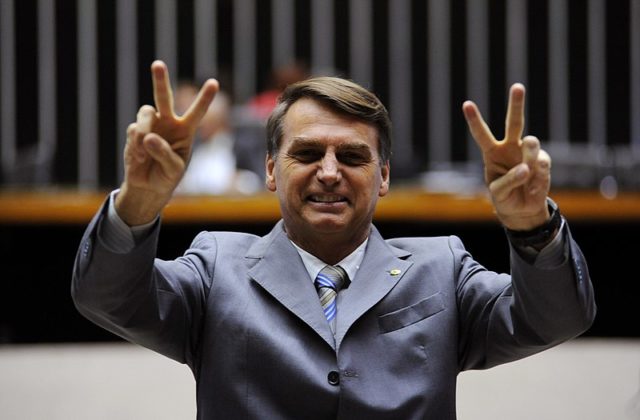 Wikimedia Commons/Chamber of Deputies of Brazil

While Venezuela’s alarming humanitarian and political crisis has rightly grabbed our attention, another disturbing event in Latin America has been forgotten. That event was the New Year’s Day inauguration in Brazil of former Army captain Jair Bolsonaro as president. His ascension marked the most drastic political change in the country since military rule ended more than three decades ago. Bolsonaro is a fervent supporter of the “glorious” military dictatorship that ruled Brazil from 1964 to 1985. It was “20 years of order and progress,” he said.

He is enthusiastic about torture and has threatened to murder and imprison his opponents. He is known for bigoted comments about the poor, minorities, the LGBT community and assertive women. He told a female legislator that she was too ugly to rape. He also said he would rather find out that his son had died in a car crash than learn that his son is gay.

Bolsonaro told his inaugural crowd, “I come before the nation today, a day in which the people have rid themselves of socialism, the inversion of values, statism and political correctness.” He said Brazil is like “a patient whose … whole body needs amputating.” He could reverse a generation of progress instituted by the Workers’ Party.

Bolsonaro wants to open up protected indigenous territories in the Amazon rainforest to mining, cattle ranching and farming. Environmentalists warn that this will speed up global climate change. But his foreign minister Ernesto Araujo has said climate change is a “cultural Marxist” hoax created by the Chinese.

The global financial community was giddy about Bolsonaro’s election. In an investor call, Timothy Hassinger, chief executive officer of Lindsay Corp., the Nebraska-based farming equipment manufacturer, referred to Bolsonaro as “strongly pro-ag,” calling his election a “bullish opportunity for us.”

Bolsonaro’s chief economic adviser, Paulo Guedes, is a right-wing banker, who has promised to deregulate the economy, cut the public pension system, revise the tax code to favor business and privatize state-owned firms. This is the cruel neo-liberal playbook used by University of Chicago-trained economists of the Chilean dictatorship of Augusto Pinochet. It caused a great deal of suffering for the majority of Chileans but it was successfully carried out because political opposition and the labor movement were crushed. Guedes is a “Chicago boy” alumnus who taught economics in Chile during the Pinochet era.

Bolsonaro was the keynote speaker at the World Economic Forum in Davos in January. At this shindig for the planet’s economic elite, Reuters reported that the Brazilian president “threw out the welcome mat for big business and foreign investors.” He got a warm reception.

This is a big change. It was only a few years ago that progressive governments were in power throughout Latin America. Beginning in the 1990s, there was a “Pink Tide” of self-proclaimed socialist and democratically elected governments in Argentina, Bolivia, Brazil, Chile, Ecuador, Honduras, Nicaragua, Paraguay, Uruguay, Venezuela and Peru. They weren’t communist (or red) but a more moderate version of the left (therefore pink).

Last October, the democratic socialist magazine Dissent hosted a conference entitled “The Future of the Left in the Americas.” Historian Patrick Iber writes that the “Pink Tide” governments were quite diverse. He says, “One point of debate at the conference was how to define the left, given that some governments that describe themselves as on the left engage in authoritarian practices, are overseeing large increases in poverty rates, or have incorporated criminal enterprises into the state.”

Iber notes, “To many international observers, there seemed to be a more radical, self-described ‘Bolivarian’ wing represented by Venezuela, Bolivia, Ecuador, Nicaragua and possibly Argentina, with a more social democratic left in Brazil, Uruguay and Chile.” He says that division is somewhat simplistic and that it can be confusing to categorize one of the groups as more left-wing.

“…(W)hat mattered more,” he stresses, “was that in most of the Bolivarian countries the old party systems had collapsed, leading to the quick creation of new hegemonic parties that used charismatic leadership to hold coalitions together. This more confrontational style polarized electorates. It put a primacy on loyalty, and often on lashing out at enemies, many real and some imagined. The social democratic countries operated within more conventional limits of democratic politics, with all of the inevitable roadblocks and disappointments that come with sharing power.”

All of the left-wing governments benefited from one of the biggest commodities booms in modern times. Latin America exports primary products and imports finished products. Iber says, “In the early 2000s, rapid growth in India and China drove up the price of primary products, from oil to lithium to soybeans. This gave governments the ability to spend money on social welfare and development, satisfying — at least in part — the needs of their political bases without making fundamental structural changes to their economies or their position in the global system of trade.”

In 2012, the commodities boom ended, mostly due to a slowdown in the Chinese economy. The governments had to cut social spending and had a hard time staying in power. There was a right-wing backlash by the economic elite. Now with the rise of far-rightists such as Bolsonaro and Trump, Latin America faces the possible return of fascist rule.

Police reform and the rebirth of hope

Self-deception and hidden agendas during the pandemic