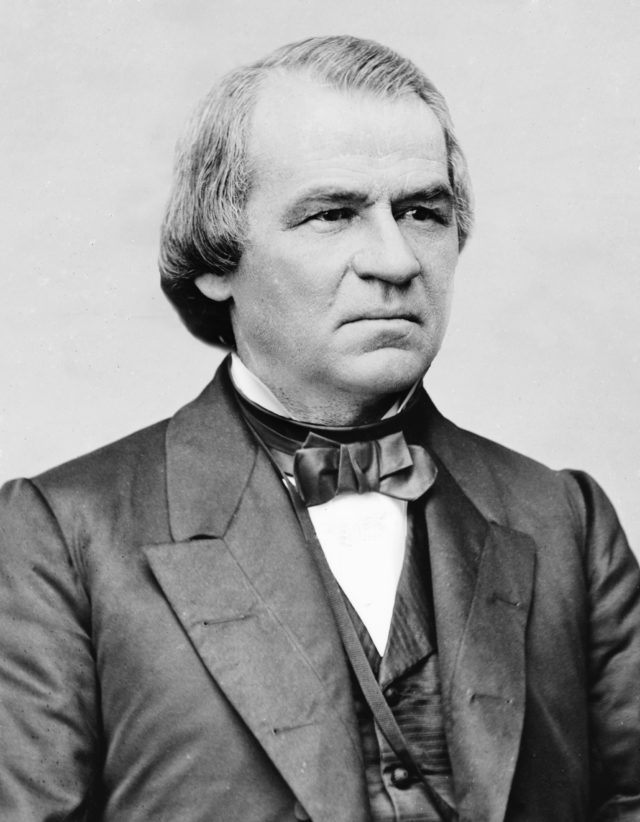 History is not the past. It is the stories we tell about the past. How we tell these stories — triumphantly or self-critically, metaphysically or dialectically — has a lot to do with whether we cut short or advance our evolution as human beings. —Grace Lee-Boggs

The Trump impeachment drama has been compared to what happened to Nixon and Clinton. However, Trump is somewhat similar to Andrew Johnson, the first president to be impeached. Johnson was a bombastic racist phony populist with a persecution complex who held rallies where he threatened to execute his political opponents.

Johnson had assumed the presidency when Abraham Lincoln was assassinated in 1865. He was a Democrat and a Southerner who opposed secession. In his 1864 re-election campaign, Lincoln chose Johnson as his running mate to convey a message of national unity.

After the Civil War, Johnson wanted to quickly reconcile with the South. He unilaterally pardoned hundreds of former Confederate leaders, vetoed civil rights legislation and opposed the 14th Amendment, which gave citizenship to former slaves. When white supremacist terrorists massacred black residents in Memphis and New Orleans, he defended the terrorists.

Johnson was in conflict with the Radical Republicans in the U.S. Congress over what postwar Reconstruction in the South would look like. They wanted to create a biracial democracy while he supported a revival of white supremacist rule (minus chattel slavery). That was basically why Johnson was impeached. As historian Brenda Wineapple puts it, the impeachers “really thought he was hindering and betraying the cause of the war. They were outraged because he was restoring the country to what it was, and they had a vision of the future — what it could be.”

For many decades, high school students in America were taught that Johnson was impeached in 1868 basically because he broke an obscure law called the Tenure of Office Act. That trivializes the event.

The law, which was passed in 1867 over Johnson’s veto, prohibited the president from firing cabinet members without the Senate’s permission. They were trying to prevent Johnson from firing Secretary of War Edwin Stanton, who was aggressively implementing Reconstruction. Johnson would fire Stanton six months after the law was passed. Stanton responded by making his home in the War Department, barricading the doors and refusing to leave.

Johnson would be impeached in the House but acquitted in the Senate by one vote.

That impeachment isn’t properly understood because we have been exposed to a grotesquely distorted narrative about the Reconstruction era, a period of political, economic and social upheaval from 1863 to 1877. According to that view, Reconstruction was a horrible mistake — a time of inept, corrupt and violent rule forced on the South by vengeful Northerners.

This interpretation comes from self-serving propaganda by Southern Democrats in the 1870s but then in the early 1900s it gains respectability when it is adopted by scholars connected to Columbia University professor William Archibald Dunning. It persisted as the dominant narrative through the 1960s. It was perpetuated by Hollywood films such as Birth of A Nation and Gone With The Wind.

Historian Eric Foner, author of Reconstruction: America’s Unfinished Revolution, 1863-1877 (now widely considered to be the best book on the subject) says that it was only after the successes of the civil rights movement that we got a more accurate history of the era:

“The traditional or Dunning School of Reconstruction was not just an interpretation of history. It was part of the edifice of the Jim Crow System. It was an explanation for and justification of taking the right to vote away from black people on the grounds that they completely abused it during Reconstruction. It was a justification for the white South resisting outside efforts in changing race relations because of the worry of having another Reconstruction.

“All of the alleged horrors of Reconstruction helped to freeze the minds of the white South in resistance to any change whatsoever. And it was only after the civil rights revolution swept away the racist underpinnings of that old view — i.e., that black people are incapable of taking part in American democracy — that you could get a new view of Reconstruction widely accepted. For a long time it was an intellectual straitjacket for much of the white South, and historians have a lot to answer for in helping to propagate a racist system in this country.”

It is encouraging that the civil rights movement had such an impact. But the successes of regressive and bigoted movements can change perceptions and behavior too. A recent survey conducted by The Economist and polling site YouGov.com asked Republicans who was the better president. Is it Trump or Lincoln? Fifty-three percent of them said Trump was preferable to Lincoln, while 47% chose Lincoln.