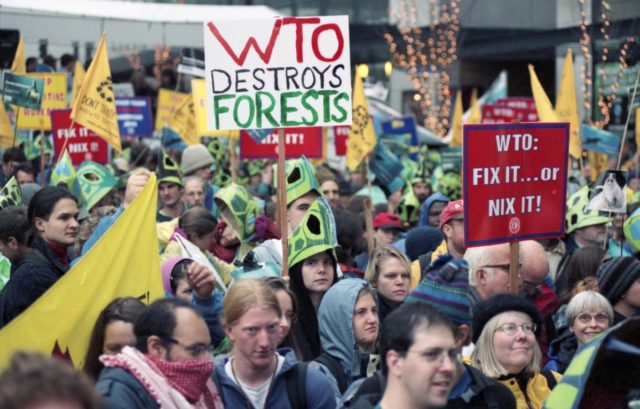 Twenty years ago, activists gave us an adrenaline rush. Tens of thousands of people flooded downtown Seattle, challenging the global economic order and yelling “another world is possible!”

They were protesting the World Trade Organization (WTO), which was conducting a major meeting with 5,000 delegates from more than 130 nations. The demonstrators weren’t against trade but they felt that runaway corporate greed was undermining democracy, community and the planet.

The Seattle protesters in 1999 had come from all over the world and from a wide variety of groups — those advocating for labor, environmental, human and animal rights, alongside progressive religious people and small family farmers. There were a lot of college students. There were giant puppets, dancing, music, Christmas carolers with anti-WTO lyrics and stilt walkers portraying corporate demons with death’s heads and big scissors for fingers. About 300 environmentalists wore turtle costumes to draw attention to the WTO’s overturning of national endangered-species laws. The longshore union shut down all the ports along the Pacific Coast from Alaska to San Diego.

“Most astonishing, there was the intermingling of all these disparate movements, generations, nations and lifestyles. There were the kids blocking the WTO delegates, who parted like the Red Sea to make way for a group of Steelworkers, identifiable by their blue-poncho rain gear as members of the most ubiquitous of the protesting unions this week. There was Amparo Reyes, a single mother who puts in a 74-hour week (for a lordly $69) at her local maquiladora, shouting ‘ Long live the Zapatistas!’ at the official AFL-CIO rally. And amid Teamsters chanting ‘Hoffa! Hoffa!’ and baby-faced animal rightsters chanting ‘No violence! No violence!’ there was the sign that proclaimed, ‘Teamsters and Turtles—Together at Last!’ “

Meyerson said the labor leaders had become enraged at the Clinton administration. They had wanted Clinton to support a WTO code for labor standards and rights, and administer sanctions to nations that violate them, just as the WTO currently administers sanctions against nations that violate property rights. Instead, Clinton proposed that the WTO create a working group to study the impact of trade on labor rights and standards.

AFL-CIO president John Sweeney agreed to sign a letter thanking the administration for this tiny step.

Then the Clinton administration announced its deal to admit China to the WTO. Meyerson said Sweeney felt “snookered.” Meyerson explained: “…The WTO acts by consensus, certainly by consensus of its major members, and the prospect that China — which independent authorities estimate has at least 850,000 workers in forced-labor camps run by the army, where child labor is rampant and unions are viewed as treasonous — would permit the WTO to pass any binding labor code was nonexistent.”

At the official AFL-CIO rally, there was a militant tone. AFSCME president Gerry McEntee, told the crowd, “The system turns everything into a commodity! A rain forest in Brazil, a library in Philadelphia, a hospital in Alberta! We have to name that system: It is corporate capitalism!”

Senator Paul Wellstone of Minnesota talked about another movement at the turn of the last century against laissez-faire capitalism and robber barons. They were populists, progressives and socialists.

The WTO still exists but it is dying, according to Lori Wallach, the director of Public Citizen’s Global Trade Watch. In a recent op-ed in the New York Times, she argues that it continues to “constrain democratic governments’ ability to address their societies’ needs.”

In a particularly absurd development, she notes:

“Recently the WTO has facilitated a circular firing squad over climate-change efforts. The European Union and Japan challenged Canadian incentives on renewable energy. The United States won a case against a solar-power program in India. Then India attacked renewable energy programs in several American states. Then China filed a case in 2018 against additional American renewable energy measures.”