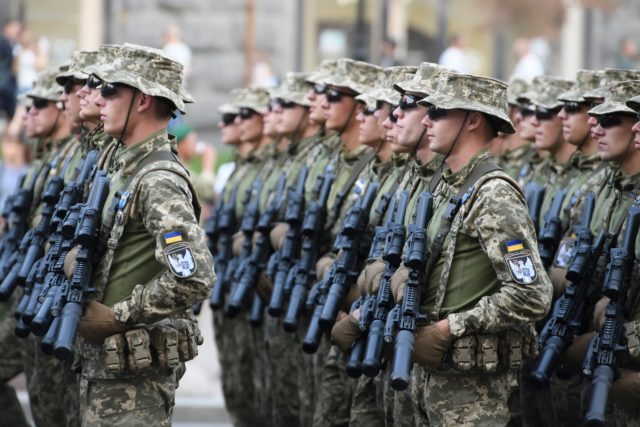 On Jan. 30, the Congress of Russian Intellectuals published an open letter demanding that the Kremlin avoid starting an “immoral, irresponsible, and criminal” war against Ukraine. It was signed by thousands, including prominent human rights advocates, scientists, journalists and politicians.

Its authors accuse Russia’s leadership of “deceiving and using people” by promoting “only one point of view” on state-run media: “the idea of a holy war with the West instead of developing the country and raising the standard of living of its citizens.”

They say, “Nobody is threatening us, nobody is attacking us.” They decry the lack of public discussion and say that the Russian people will pay “a huge and bloody price” if there is a war.

I am writing this on Sunday, Feb. 13. More than half of Russia’s armed forces are surrounding Ukraine.

Maybe this is a bluff or some political ploy. Putin insists that he has only peaceful intentions. Maybe those troops will be break dancing and singing “Give Peace A Chance” when you are reading this.

This is a highly dangerous moment. Republican and Democratic hawks are saying that Biden is “weak” on Putin. However, on the far right, Tucker Carlson of Fox News is basically echoing Putin’s perspective. This is important since Carlson is U.S.’s most watched prime time cable TV host.

Carlson says America’s real enemy is China, not Russia. He is in love with Putin ally Viktor Orban,

Some lefties consider far rightists like Carlson to be allies. You can have strange bedfellows in politics but you have to be careful. Matt Duss, a foreign policy adviser to Senator Bernie Sanders (I-Vermont), told Washington Post columnist Greg Sargent, “Tucker’s argument against escalation is essentially based on the idea that Ukrainian lives don’t matter.” Duss said progressives “are wary of military escalation” but they support using other “policy approaches and tools” to constrain Putin because “Ukrainian lives do matter.”

Carlson feels that Putin is an ally in a far right international alliance. As Duss puts it, “In the Carlson-MAGA worldview, Putin is an avatar of white Christian nationalism.”

“Having called themselves ‘conservatives,’ the members of United Russia have simply determined their place as a right-wing party,” political scientist Dmitry Travin said. That means that they are “politicians who defend values of the market economy based on national traditions,” Rosbalt news agency quoted him as saying.

“At the same time, they are not staunch defenders of freedom as liberals, and they are not followers of egalitarianism as social democrats,” he said.

A recent U.S. intelligence community assessment obtained by Yahoo News concluded that the Russian government is providing “indirect and passive support” to violent neo-fascist groups operating in the U.S. and Europe.

The neo-fascist Russian Imperial Movement has fought in Ukraine. The U.S. State Department designated the organization as a terrorist group in April 2020.

Another Russian neo-fascist group, Rusich Reconnaissance and Sabotage Group, sent members to fight in eastern Ukraine in 2014 and 2015, according to the document.

According to New America Foundation, Rusich is closely aligned with Russia’s mercenary corporation Wagner Group. This organization is Putin-adjacent but ostensibly a private company. Rusich recently hinted on social media that it plans to return to eastern Ukraine.

Putin-friendly media emphasize Ukraine’s far right nationalists. Indeed, they played a big role in the Maidan protest of 2014 but their power has greatly diminished. The far right parties are now electorally insignificant. That can’t be said of Germany, France or Russia.

We need to prevent “what could be the worst European war in over 75 years,” Bernie Sanders told the Senate recently. He said Putin is “most responsible” for creating the crisis, but that the U.S. is hypocritical to ignore Russia’s security concerns. However, Sanders also said it is “unacceptable” that Putin now threatens to take over all of Ukraine and destroy its independence and fragile democracy.