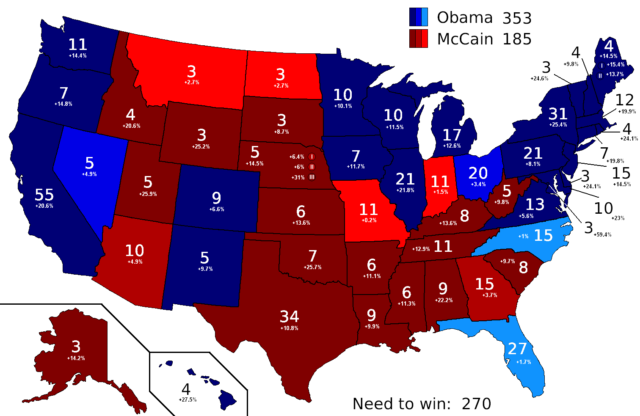 The Colorado legislature approved a bill on Feb. 21 to cast Colorado’s electoral votes for president for the candidate who gets the most popular votes nationally, even if that candidate loses in Colorado. Governor Polis has announced he’ll sign the bill.

In 2000 and again in 2016, the Democratic candidate (Al Gore in 2000 and Hillary Clinton in 2016) won the national popular vote but lost in the Electoral College.

Democrats were outraged by this, so they came up with a clever scheme to keep it from happening again — while avoiding the near-impossible task of amending the Constitution to abolish the Electoral College.

If Polis signs the bill, Colorado will become the 12th state to join the compact; the District of Columbia has also joined. With the addition of Colorado, the signatories of the compact will have 181 of the 270 electoral votes needed to trigger it.

In an interview last Sunday, Polis called the Electoral College an “undemocratic relic” and said the compact is “a way to move towards direct election of the president.”

But is the compact constitutional? Probably.

A state’s electoral votes aren’t a political abstraction. They are cast by real human beings who are elected to cast them by the people of their state. A presidential elector is a popularly elected official, same as a state’s governor or members of a state’s legislature.

So how can a state legislature decide to give a state’s electoral votes to a candidate who a) didn’t win the popular vote in the state, and b) whose slate of electors therefore lost their election within the state?

Because of Article II, Section 1 of the U.S. Constitution, which reads in part as follows (italics added):

“Each state shall appoint, in such manner as the legislature thereof may direct, a number of electors, equal to the whole number of senators and representatives to which the state may be entitled in Congress…”

Under the National Popular Vote compact, a state’s “chief election official,” presumably the Secretary of State in the case of Colorado, would be required to declare the slate of electors for the candidate who got the largest national popular vote total as Colorado’s Electoral College members, even if they lost the election in Colorado — because Article II, Section 1 of the U.S. Constitution gave the legislature the power to direct him or her to do so.

But maybe too clever by half.

Move on from Article II, Section 1 to the Fourteenth Amendment’s Section 2.

“Representatives shall be apportioned among the several States according to their respective numbers, counting the whole number of persons in each State, excluding Indians not taxed. But when the right to vote at any election for the choice of electors for President and Vice President of the United States, Representatives in Congress, the Executive and Judicial officers of a State, or the members of the Legislature thereof, is denied to any of the inhabitants of such State, being eighteen years of age, and citizens of the United States, or in any way abridged, except for participation in rebellion, or other crime, the basis of representation therein shall be reduced in the proportion which the number of such citizens shall bear to the whole number of citizens eighteen years of age in such State.”

In other words, Article II, Section 1 of the Constitution gives the Colorado legislature the power to designate a slate of candidates that finished second as the state’s electors — even though this self-evidently abridges the voting rights of the Coloradans who cast ballots for the slate that finished first — by rendering their votes meaningless.

But Section 2 of the Fourteenth Amendment suggests that if the Colorado legislature follows through and does this, the state could lose at least half of its seats in Congress.

Be careful what you wish for, because you might get it — good and hard.