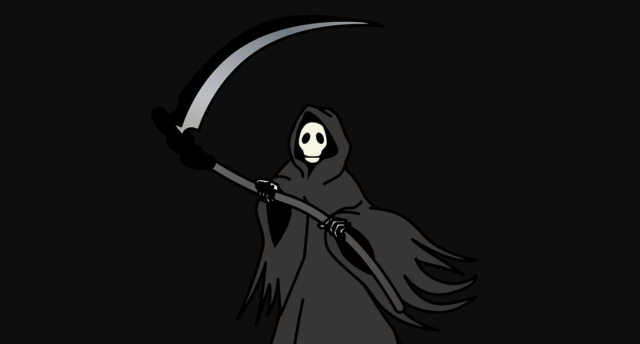 The Idea Fairy and I were kicking back — banana nut bread is the gift that keeps on giving — when there was a knock at the door. It was the Grim Reaper and a giant test tube with legs.

“Yikes!” screeched i-Fairy and flitted out the back door.

I refused to panic.

“Does this mean my number is up?” I said grimly.

“No, it means I want to borrow a roll of toilet paper,” Reap said grimly.

“Over my dead body,” I snapped grimly. “I had to fight my way through the walking dead in the toilet paper aisle at King Soopers to get a four-pack.”

“Don’t press your luck, buster,” Reap retorted, running a boney finger along the blade of his scythe.

I realized the time for light banter was past.

“OK,” I said grimly. “Come in and take a load off, and pour yourself a restorative.”

“You look like death warmed over,” I added grimly.

“Thanks for the compliment,” he replied grimly. “But we can only stay a few minutes. We may have a gig in Washington — Trump and Pence aren’t wearing masks — and we have to catch an over-crowded plane to The Swamp.”

“I hear the miasma is lovely at this time of year,” I said grimly. “But you look like you’re working too hard. Why don’t you take a few weeks off? You need a holiday, so to speak.”

“Well I tried that last February,” Reap said grimly. “I signed up for a cruise on a ship called the Diamond Princess. Everything was great for a couple of weeks, but then people started coming down with a virus. By the time it was over it was just another busy month at the office for me.”

“BTW, you didn’t introduce your friend,” I said grimly, casting a wary glance at the test tube.

“That’s Corona,” Reap said grimly. “She’s my new intern. We met on the cruise after she blew her cork one night.”

I looked over Corona more closely. Her cork had the word “Corona” printed on it in shocking pink, along with a skull and crossbones. She was wearing a tube top with a picture of a freezer wrapped in chains and the letters “CDC” painted on it. Below the freezer were the words “Free the smallpox quintillion.”

Suddenly, a cold, icy hand of fear gripped me. The only thing more frightening than an active virus is an activist virus.

Reap’s discreet death rattle snapped me out of it. “The reason we stopped by was that Corona wants to make you an offer,” he said grimly.

“Which I can’t refuse, of course,” I said grimly.

“Of course,” Corona chimed in grimly.

“Here’s the deal,” she said grimly. “I need a flack. And you’re just the guy for the job.”

“In other words,” I said grimly, “you want me to be a spokesman for the virus.”

“But why does the virus need a spokesman?” I asked grimly. “Coronaviruses are getting all the publicity they can handle already. Their story is sucking all the oxygen out of the room, so to speak.”

“Yeah, but it’s all bad publicity,” Reap said grimly. “Corona has had her fill of it and is ready to blow her cork again.”

“Uh, why don’t you just sue the New York Times and CNN for libel, like Trump did,” I said grimly.

“Libel suits take forever,” Corona replied grimly, “thousands of lifetimes in virus years. And then there’s always that pesky ‘truth is a defense’ thing. When you’re a virus, the system is always rigged against you.”

I had to admit she had a point.

“Well why don’t you put out a press release pointing to pandemic positives,” I said grimly. “Like less traffic, more parking, more job openings, lower monthly rates at nursing homes, and so on.”

“It has possibilities,” Reap said grimly. “But it could be a hard sell.”

Suddenly I had an idea.

“Maybe you could convince people to take COVID cruises,” I said grimly. “Most of the people who take cruises are geezers like me. You could open with a shot of a cruise ship sailing into the setting sun. The voice-over would say, ‘You always wanted it to end with you sailing off into a sunset. Now’s your chance! Why die in the ICU with a freaking ventilator tube crammed down your gullet when you can go out in style? Fifty percent off regular rates, since it’s a one-way trip! Free burial at sea included!’”

That has possibilities,” Corona said grimly. “Got any other ideas?

“Yeah,” I said grimly. “Why don’t you infect the White House press corps? It would be wildly popular with anyone who ever had to deal with a bunch of snarky twits and bullies in high school, which is practically everyone. Trump could have them quarantined in an appropriate place — like Terra del Fuego or Cheyenne Mountain or Dick Cheney’s Undisclosed Location Ranch. That should stop all the anti-virus hysteria. And after they get out the survivors will have completely forgotten about the coronavirus because they have the attention span of a rhinovirus.”