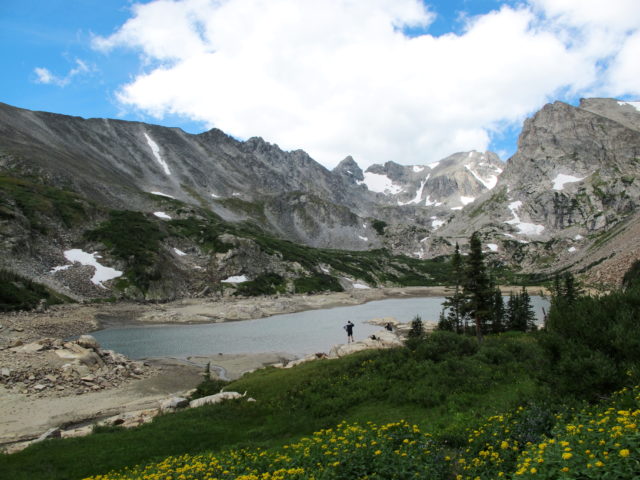 Imagine stepping out of your front door, grabbing your hiking poles, putting your binoculars around your neck, lacing up your running shoes, or putting your legs over your mountain bike to begin a 60-plus-mile, non-motorized, backcountry trail adventure from your home, over the Continental Divide, and all the way to Winter Park. We have good news. This is exactly the vision that a group of grassroots citizens have been working toward over the last two years. We call it the Indian Peaks Traverse (IPT; indianpeakstraverse.org). We just incorporated as a 501(c)(3) not-for-profit corporation to support this vision and the land management agencies that will be crucial to realizing it.

Our coalition is taking an inclusive, grassroots and big-tent approach to realizing the vision of the IPT. We have been networking with different user groups, communities, land managers, conservation organizations and political leaders, all in the service of getting constructive feedback early and often. We were founded and are run by a grassroots group of optimistic, enthusiastic and adventure-loving citizens of Grand and Boulder counties. And we are taking a big-tent approach by including hikers, conservationists, trail runners, equestrians and mountain bikers, knowing that a vision as ambitious as the IPT will require buy-in, volunteerism and commitment from the broadest possible group of stakeholders.

With a growing Front Range population, increasing demand for recreation in natural places, and fewer resources than ever flowing to the land management agencies that protect our public lands, we believe the stewardship of those lands is up to us — the citizens who love our public lands, value habitat conservation and enjoy recreating in nature. We also believe that we must find ways to harness the enthusiasm of the young and passionate community of committed recreationists in the service of conservation. We believe that regional connectivity to leverage existing access across land management agencies is necessary to provide a meaningful recreation experience and to tamp down the demand for an ever-increasing network of trails that can endanger the very habitats and species that define us as Coloradans.

Recently, a three-agency working group consisting of Boulder County Parks and Open Space, City of Boulder’s Open Space and Mountain Parks Department, and Colorado Parks and Wildlife recommended that a trail be built from Eldorado Canyon State Park to Walker Ranch, which is the final missing link of the IPT. That recommendation is now being reviewed by interested citizens and the appointed and elected bodies that oversee these agencies. However, the public has raised significant concerns about long-standing management issues in Eldorado Canyon State Park and the spillover effects they have on the Town of Eldorado Springs.

We at the IPT Coalition believe that these concerns are valid and important. The success of the IPT itself depends upon meaningfully addressing them. Elsewhere, we have identified many of the key issues and have proposed solutions as a starting point for continued discussions with the state park, residents of Eldorado Springs and other stakeholders. For example, a shuttle could transport people to the state park, open space trailheads and the Eldorado Springs pool like those implemented now in many national parks, and locally for the Hessie and Chautauqua trailheads. A multi-use trail into the park could be designated that would allow trail runners, mountain bikers, and even many hikers to avoid the Town of Eldorado Springs and the associated congestion and parking issues entirely. An extension and upgrading of the “streamside” trail has been proposed, which would connect the state park entrance to the visitors center and provide for separation of people from vehicular traffic.

In the final analysis, the IPT Coalition believes that the staff recommendation for an Eldo-to-Walker trail on the north side of the canyon represents a reasonable starting point for further refining the trail route to avoid environmentally sensitive areas, and offers the opportunity to bring political attention and resources to bear on long-standing Eldorado Springs and state park issues while providing a long-sought-after regional trail connection. There is a lot of work yet to be done by the community, but we remain optimistic that this long-needed, but difficult discussion will lead to solutions for existing park users, the townspeople of Eldorado Springs, and a new regional trail connecting Boulder to Winter Park — the Indian Peaks Traverse!