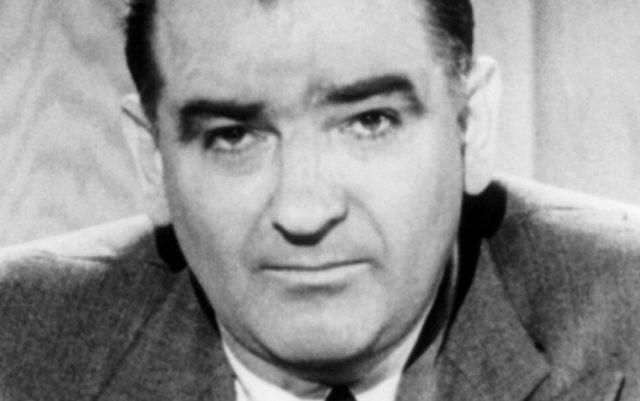 Donald Trump has been compared to earlier rightwing demagogues such as Hitler, Mussolini, George Wallace and Pat Buchanan. The name of witch-hunter Senator Joe McCarthy comes up a lot.

Recently, the New York Times, Washington Post and Politico published lengthy pieces about how McCarthy’s henchman, Roy Cohn, became one of Trump’s best friends and his closest adviser on business and personal matters.

Cohn had been chief counsel for McCarthy’s Senate permanent subcommittee on investigations. McCarthy had been censured and disgraced after he tried to smear the Army and the CIA. But Cohn moved back to his native New York and became a highly visible power broker as the lawyer of politicians, big businessmen and mobsters. He became friends with gossip columnists and shamelessly used the tabloids to get in the headlines.

Trump and Cohn met by chance in 1973 at Le Club, a private disco for Manhattan’s rich and famous. Trump was a 27-year-old developer who ran a real estate empire with his dad Fred. Trump introduced himself to Cohn and asked him about a bothersome legal problem. The Civil Rights Division of the Justice Department was suing him and his father, accusing them of refusing to rent to black tenants. Trump told Cohn that their lawyers were urging them to settle. He didn’t want to do that.

“Tell them to go to hell and fight the thing in court,’” Cohn said.
Trump hired him as his new lawyer and one of Cohn’s first acts was to file a $100 million countersuit that was quickly dismissed by the judge for “wasting time and paper.”

But Cohn fought on for over a year and a half and accused the Justice Department and the FBI of using “Gestapo-like tactics.”

The Trumps would be forced to sign a consent agreement to rent to more blacks and other minorities and they had to put ads in newspapers — including those targeted specifically to minority communities — saying they were an “equal housing opportunity” company. Trump complained about the cost of the ads. “It is really onerous,” he said.

The government called the consent decree “one of the most far reaching ever negotiated.” But Cohn and the Trumps claimed it was a victory for them.

After this, Cohn became Trump’s mentor on practically everything. In 1979, Trump told Newsweek, “If you need someone to get vicious toward an opponent, you get Roy.”

A year later, pressed by a reporter from New York Magazine to justify his association with Cohn, he said: “All I can tell you is he’s been vicious to others in his protection of me.” He elaborated in an interview in 2005. “Roy was brutal, but he was a very loyal guy,” Trump told author Tim O’Brien. “He brutalized for you.”

Trump remained friends with Cohn even after the lawyer was disbarred in New York on ethics charges. However, Trump cut all business and personal ties to Cohn when he was dying of AIDS.

Trump knew Cohn was a closeted homosexual. Politico’s Michael Kruse says, “(Cohn) was a tangle of contradictions, a Jewish anti-Semite and a homosexual homophobe, vehemently closeted but insatiably promiscuous. In 1964, ’69 and ’71, he had been tried and acquitted of federal charges of conspiracy, bribery and fraud, giving him — at least in the eyes of a certain sort — an aura of battle-tested toughness, the perception of invincibility.”

Kruse says that people who have known both Cohn and Trump say they “see in Trump today unmistakable signs of the enduring influence of Cohn. The frank belligerence. The undisguised disregard for niceties and convention. The media manipulation clotted with an abiding belief in the potent currency of celebrity.”

Many years ago, Cohn introduced Trump to two men, Paul Manafort and Roger Stone, who are playing a crucial role in his presidential campaign. They are longtime political manipulators involved in the Republican “establishment.”

The soft-spoken Manafort is now running Trump’s campaign. He studied under James A. Baker III who was Reagan’s Chief of Staff and George H.W. Bush’s Secretary of State. Trump denounces all those horrible Washington lobbyists. But Manafort is one of the sleaziest lobbyists in D.C.

Manafort was a lobbyist for despots in the Philippines, the Dominican Republic, Nigeria, Equatorial Guinea and Somalia. The Center for Public Integrity released a report, which detailed the firm’s work, entitled “The Torturers’ Lobby.” Manafort would clean up a dictator’s image, coach him on how to present himself and have him booked on 60 Minutes and Nightline.

While Manafort is low-key, Roger Stone is a loudmouth. He has specialized in campaign “dirty tricks” since Nixon. For example, he created a pseudonym and made contributions on behalf of the Young Socialist Alliance to one of Nixon’s potential challengers.

Stone recently claimed that Ted Cruz’s father was involved in the JFK assassination. He has said that Bernie Sanders should be shot for treason.

Stone is now calling for a McCarthyite witchhunt against Muslims.

He is specifically asking if Hillary Clinton’s close adviser Huma Abedin is a “Saudi spy” or a “terrorist agent.”

Newt Gingrich has jumped in with a proposal to revive the House UnAmerican Activities Committee to go after Muslims. He is a Trump supporter and says he is willing to serve as Donald’s vice president.

It will be a very ugly campaign.