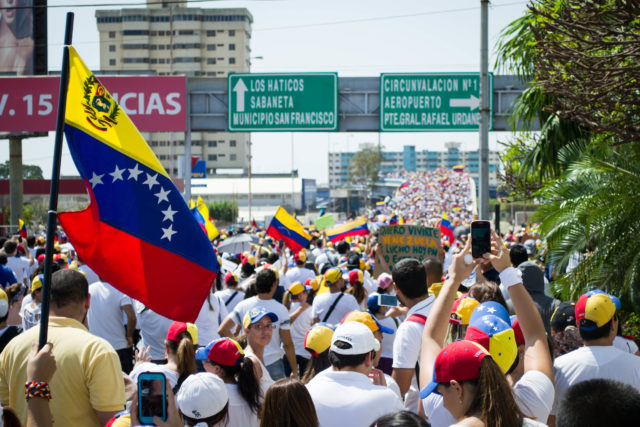 Giselle Cesin’s recent column (re: ‘An insider’s view of the Venezuelan crisis, March 7) from an opposition perspective enumerated a number of reasons why many Venezuelans are dissatisfied with President Maduro’s administration. However, given the disastrous history of U.S. interventions worldwide including, for example, Iraq, Libya, Chile, Honduras, Guatemala, El Salvador and Nicaragua, I question whether greater U.S. intervention would help the Venezuelan people.

After socialist Salvador Allende was democratically elected President of Chile in 1970, Henry Kissinger, President Nixon’s National Security Advisor, said: “I don’t see why we need to stand by and watch a country go communist due to the irresponsibility of its people. The issues are much too important for the Chilean voters to be left to decide for themselves.”

Between 1970 and 1973, the U.S. used economic means to starve the Chilean economy and also funded opposition to President Allende in an effort to destabilize Chile. The result was the murderous 1973 military coup that yielded the brutal and devastating 17-year Pinochet military dictatorship.

I think the U.S. has two primary motives for its current attack on the Venezuelan government. Just as with Chile, the U.S. wants to prevent any approach other than neoliberal capitalism to be considered as viable and as an example for other nations. John Bolton, the U.S. national security adviser, clearly stated the other motive — gaining U.S. oil companies access to Venezuelan oil.

The U.S. has been applying its Chilean model on Venezuela since Hugo Chávez’s 1998 election victory. Before then, Venezuela was a nation whose oil wealth primarily benefited U.S. oil companies, Venezuelan oligarchs and its upper class. Meanwhile there was a high level of poverty, huge wealth inequality and widespread racism and classism.

Instead of continuing to serve U.S. imperial interests, President Chávez used more of Venezuela’s wealth to benefit the entire population, not just the elite. As a result, there were impressive improvements in many areas including increased education enrollment, gains in employment, and reductions of inflation, economic inequality, child malnutrition and poverty.

The First Coup and
Subsequent Plotting

Despite this amazing progress, U.S. leaders wanted a return to the pre-Chávez situation and found willing collaborators among many of the Venezuelan elite. Perhaps recognizing that they couldn’t win a fair election, the opposition pursued another path to power. In 2002, right-wing forces staged a violent coup, allegedly in the name of democracy, that removed Chávez. The U.S. leadership strongly supported the coup. However, the Venezuelan people and military ousted the coup plotters after two days and returned Chávez to power.

After the failed coup, the right-wing opposition, with U.S. support, continued efforts to destabilize the Chávez government. The U.S. Agency for International Development (USAID) was one group that funded the opposition to subvert the democratic Venezuelan government. In addition, little reported is the fact that Venezuelan opposition activists, including Juan Guaidó, received training and generous funding from the U.S. Funding came especially from the National Endowment for Democracy, a U.S. group created to undermine governments the U.S. opposes. Unsurprisingly, Guaidó’s positions are in line with those espoused by the U.S.

President Nicolás Maduro has continued the Chávez program of benefiting all the population, not just the elite. Mainly as a result of this policy, Maduro has won two democratic elections, the most recent in May 2018. Nevertheless, life in Venezuela is difficult today with hyperinflation, hoarding of goods and numerous shortages.

The dramatic fall in oil prices and some bad economic decisions by the Maduro government have contributed to this situation. Nonetheless, despite the U.S. media downplaying the impact of U.S. sanctions and financial tactics, this U.S. economic warfare has probably played the major role in creating this crisis. Unfortunately for Venezuelans, U.S. leaders don’t care about their lives. The U.S., unless stopped, is likely to continue its cruel economic warfare until it gets its way.

There is certainly substantial dissatisfaction with the Maduro government and the corruption. The population is polarized; however, one thing uniting the population is the overwhelming opposition to outside interference, especially the U.S. sanctions and use of the military. Perhaps one path to a resolution is negotiation between the government and the people mediated by the Vatican, Mexico and Uruguay. Given the overwhelming opposition to outside interference, groups that are fronts for U.S. interests must not be allowed to participate.

Please contact your members of Congress and encourage them to oppose any military intervention and to end the cruel sanctions. To get involved, contact the Rocky Mountain Peace and Justice Center at rmpjc@earthlink.net.

Editor’s note: Cesin’s article was not written from the opposition position as stated in the above guest column. The article described the worsening conditions and the increasing calls for U.S. intervention by a growing number of Venezuelan citizens. It made no endorsement of such a position. Ms. Cesin is opposed to U.S. intervention in her country.