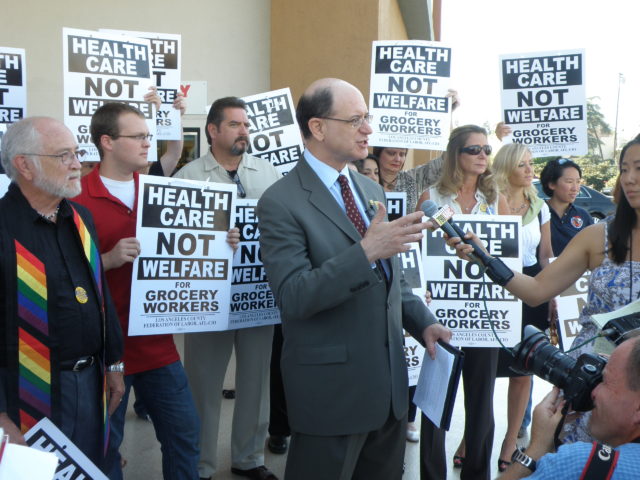 On Feb. 26, the U.S. Supreme Court heard arguments in Janus v. American Federation of State, County and Municipal Employees (AFSCME). The Washington Post calls it “the most important labor case of the 21st century to date.” The lawsuit is funded by an alliance of big corporations, right-wing foundations and billionaire activists like the Koch brothers who are hoping to deal a “mortal blow” to progressive politics.

The lead plaintiff, Mark Janus, is a child support specialist who argues that a state law in Illinois allowing the union to charge a fee for collective bargaining activities violates his First Amendment rights. A majority of his fellow workers voted to unionize and AFSCME negotiated better pay and benefits. Janus didn’t have to join the union but was compelled to pay a “fair share fee” (lower than union dues) for the costs of the functions that the union performs on his behalf and on behalf of all the other workers. If a non-union employee such as Janus has a grievance with his employer, the union is legally required to represent him in grievance procedures.

The American Civil Liberties Union (ACLU) filed an amicus brief on behalf of AFSCME. David Cole and Amanda Shanor of the ACLU argued in an article in The Nation that: “It is not a violation of the First Amendment to disallow free riders who would have others pick up their costs. The First Amendment protects the right to speech, but not the right to get something for nothing.”

Shanor told Democracy Now that the lawsuit is part of a larger libertarian effort “to use the First Amendment to challenge what we might otherwise understand as regular economic regulation, in areas not just for unions, but the government’s ability to act on climate change or public health or a range of different activities.”

The Center for Media and Democracy acquired a fund-raising letter from the State Policy Network (SPN), an alliance of 66 state-based think tanks, describing a campaign with an $80 million annual budget to “defund and defang” unions representing government employees as the first battle in a war against progressive politics.

The author of the letter, SPN’s president and CEO Tracie Sharp, says they have a “once-in-a-lifetime chance to reverse the failed policies of the American left … We are primed, right now, to deliver the mortal blow to permanently break its stranglehold on our society.”

This comes at a time when the labor movement is more popular than it has been in decades. Over the past year, approximately 60 percent of Americans expressed support for unions, according to Pew and Gallup polls. Even a large minority of Republicans are favorable. According to Gallup, 39 percent of Americans would like unions to have more influence — the highest figure recorded in the 18 years the polling organization has asked this question. Pew says that 76 percent of Americans under 30 approve of unions.

Today, only about 7 percent of private sector workers belong to a union. Most of them would like to join, according to numerous polls. However, if they try to organize, they are faced with a campaign of psychological warfare. Chris Tilly, director of the UCLA Institute for Research on Labor and Employment, notes that U.S. employers “have perfected the art of the anti-union campaign, in which they ratchet up the tension, one-sided arguments and flat-out intimidation to the point where most workers will vote ‘no union’ just to end the discord. Unfortunately decades-old U.S. labor laws do little to curb such tactics.”

By contrast, public employee unions have remained rather stable with membership at about 35 percent. But they have been under relentless attack for several years. In 2010, Scott Walker, the newly elected Republican governor of Wisconsin, passed Act 10, which stripped public sector unions of the power to bargain collectively and forced them to re-certify themselves every year with electoral backing from more than 50 percent of all workers, not just those voting. Iowa and Indiana passed similar laws.

A total of 28 states have also passed so-called “right to work” laws that allow private sector workers to refuse to join unions while enjoying the benefits of collective bargaining.

It is too early to understand the full impact of these anti-union measures but public sector union membership in Wisconsin has dropped by 40 percent since Act 10 passed. That’s 136,000 union members. Trump won Wisconsin by 23,000 votes. “Did the labor reforms enacted in Wisconsin and neighboring Michigan help Donald Trump win those states?” asked anti-tax activist Matt Patterson. “No question in my mind. Hard to fight when your bazooka’s been replaced by a squirt gun.”

SPN president Tracie Sharp told The Wall Street Journal that Wisconsin and Michigan were only “thinly blue” and that the GOP’s destruction of the states’ unions was crucial. She notes cheerfully, “When you chip away at one of the power sources, that also does a lot of get-out-the-vote. I think that helps — for sure.”

Our country’s future is at stake. A strong and prosperous union movement is essential if we are going to have economic and social justice.