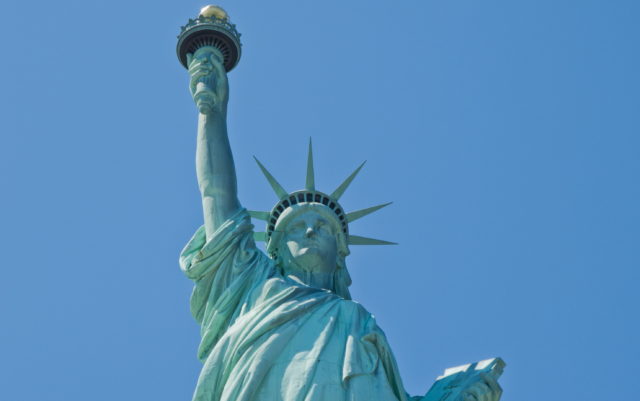 Why are we having all these people from shithole countries come here? Well for one thing, it’s because of what’s on the welcome sign. You know, the one out on Bedloe’s Island in New York Harbor, on the base of the Statue of Liberty.

The money lines go like this (I’ve taken the liberty of rendering a couple of archaic usages into modern English for the sake of clarity): “Give me your tired, your poor, your huddled masses yearning to breath free, the wretched refuse of your shithole countries. Send these, the homeless, tempest-tost to me…” And so on.

In other words, the welcome sign gives a special shout-out to the wretched refuse. And in the preceding sentence it bluntly states who’s not welcome: “Keep, ancient lands, your pompous, condescending elites.”

The welcome sign also gives a name to the statue — not the Statue of Liberty, but “Mother of Exiles.”

OK, the welcome sign is just a poem written in 1883 by Emma Lazarus. It has no official or legal standing.

Then again, a lot of the country’s most powerful ideas never made it into the Constitution or the U.S. Code. That’s because they were deemed too dangerous to codify — like Jefferson’s assertion in the Declaration of Independence that “the pursuit of happiness” is an unalienable right.

Still, I bet if you asked the American people what they thought of Ms. Lazarus’ poem, you’d get a couple hundred million “#MeToo” shout-outs.

But why does the welcome sign single out homeless, storm-tossed, human garbage from shithole countries for a special welcome, while telling pomped-up elites to stay away?

The welcome sign isn’t there to welcome tourists, foreign investment and cheap labor.

It’s there to welcome people who want to become Americans.

And it’s a lot easier to dissolve those bands — especially the psychological ones, the mystic chords of memory — if you come from a shithole country instead of, say, Norway.

Speaking of Norway, today it’s about the last place on Earth that anyone would call a shithole country, but in the 19th century, when waves of Norwegians were arriving in the U.S., that was another matter.

The people we’re after are those who have declared, or are at least willing to declare, their personal independence from the prevailing norms and underlying values of their countries of origin, people who are refugees in the broadest psychological and cultural senses of the word. Those are the ones we want.

Provided they want to do one thing: Assimilate. You know… Learn English. Get a job. Buy a car. Learn enough about the country’s history, traditions and political institutions to pass a citizenship test. Show a decent respect for the flag and the rights of people with whom they disagree. Extra credit for groking American popular culture. And so on.

As for Trump’s unkind characterization of the Third World’s failed and failing countries, think of it as a case of libel, not racism. And in that regard, two points need to be made.

First, if Trump libeled countries like El Salvador, Haiti, Somalia, The Democratic Republic of the Congo, Syria, Yemen, etc. when he called them “shithole countries,” he has a lot of co-defendants. They include CNN, Washington Post, New York Times and the rest of the shithole press that interminably repeated the libel and spread it around the world, despite knowing that the reputations of the plaintiff countries would be collateral damage.

Libel law would hold them just as liable as Trump, more so even, because they’re the ones who turned a slander heard by no more than a couple dozen people in a closed meeting into a global libel that reached billions.

Second, Trump and his co-defendants would have a powerful defense available to them — truth.

In order to prevail, all they would have to do is prove to the satisfaction of a jury that El Salvador, Haiti, Somalia, etc. really are shithole countries.

An obvious way to do this would be to call witnesses to testify that life in the plaintiff countries is so god awful that a reasonable person would conclude that, “Yep, those places are real shitholes.”

Able and willing witnesses shouldn’t be hard to find. There are hundreds of thousands of them in the U.S., legally and illegally. They’re called refugees, or wretched refuse, if you prefer.

Why do you think they’re here in the first place?

Sidebar: And here’s the poem

With conquering limbs astride from land to land;

Here at our sea-washed, sunset gates shall stand

A mighty woman with a torch, whose flame

Is the imprisoned lightning, and her name.

Mother of Exiles. From her beacon-hand

With silent lips. “Give me your tired, your poor,

The wretched refuse of your teeming shore.

Send these, the homeless, tempest-tost to me,

I lift my lamp beside the golden door!”