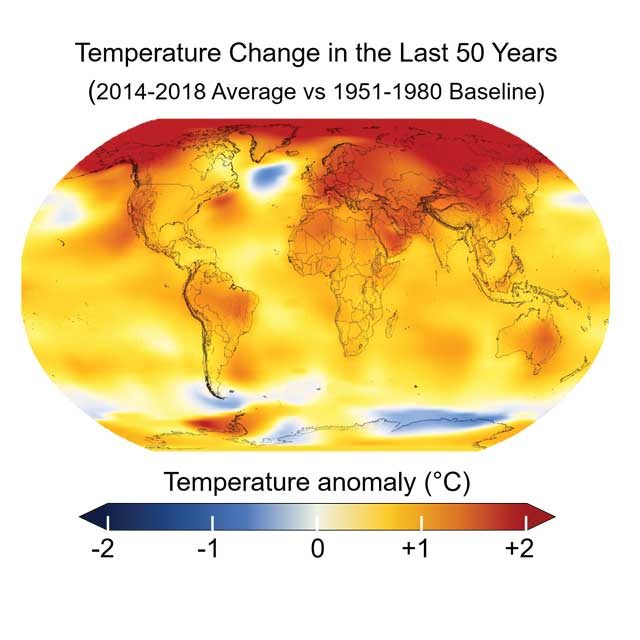 In 2016, the U.N. requested a special report on the impacts of global warming should temperatures rise 1.5 degrees Celsius (2.7 degrees Fahrenheit) above pre-industrial levels. At the time, the U.N.’s hope was that the global response to climate change and its symptoms would be strengthened once countries and organizations were equipped with specific data and information. As such, the Intergovernmental Panel on Climate Change (IPCC) took the lead, gathering some of the brightest minds in the world to analyze the impacts and associated risks of global warming.

Of course, the knowledge that rising temperatures are threatening life on Earth as we know it is not breaking news. Between worsening air quality affecting even the most remote corners of the planet and sea conditions poisoning marine life, global warming has already altered the foundation of many ecosystems around the world.

It’s estimated that human activity has already caused an approximate 1 degree Celsius (1.8 degree Fahrenheit) temperature increase since the “pre-industrial” reference period — the average global surface temperature between 1850-1900. According to the 2018 IPCC report, another 0.5 degree of warming is likely to occur between 2030 and 2052, if the rate of climate change stays the same as it is today. That gives us a roughly 11-year window to get serious about reconfiguring, firstly, our response to the inevitability of climate change, and, secondly, our continued contributions to warming climates — or else we face irreversible damage.

We need “the full involvement and alignment of our technical, social and political dimensions,” Glen Peters, the research director at Norway’s Center for International Climate Research, told National Geographic after the IPCC report was released. Or, he says, keeping temperature rise to a minimum of “1.5 [degrees Celsius] and even 2 [degrees Celsius] won’t be possible.”

With this reality looming on the horizon, communities are beginning to realize holistic responses to both the contributions to and consequences of climate change are imperative if major populations are to remain healthy and safe. Education is an important first step in understanding the issue and successfully responding.

From analyzing the IPCC report, there are two important things to note. First, even if someone could wave a magic wand and pause all pollutants and active ecological destruction right now (deforestation, mining, water waste, etc.), the warming that human activities have already initiated and its effects would continue, albeit at a slower rate, potentially for centuries to come.

As such, the second important thing to note is our reality: We don’t have a magic wand, and change to our status quo is inevitable, so what’s left to focus on is the slowing and managing of the climate’s rate of change — can we give humans more time to assess, acclimate and adapt to what’s to come?

Let’s start with the oceans: Projections in the IPCC report suggest seas could rise anywhere between 0.26 to 0.77 meters, displacing millions of people. Marine ice sheets would grow increasingly unstable, and irreversible loss of Greenland’s ice sheet, in particular, could result in many more meters of sea level rise in the next centuries to come.

Coral reefs are projected to decline by another 70 to 90 percent, and if temperatures rise 2 degrees Celsius, it could be more than 99 percent — irreversible damage.

On land, of the 105,000 species studied in the report, 6 percent of insects, 8 percent of plants and 4 percent of vertebrates are on track to lose over half of their traditional, climatically determined geographic range. Joshua trees, for example, might not be suited for the new climate of Joshua Tree National Park.

“Any increase in global warming is projected to affect human health,” the report states, “with primarily negative consequences.” Aside from damaging air quality, resource depletion and uninhabitable land, vector-borne diseases, for example, are projected to increase and shift in geographic range.

Of course, more extreme temperatures overall are to be expected — with “high confidence” the report details increases in frequency, intensity and amount of heavy precipitation; with “medium confidence” they predict the intensity or frequency of droughts will occur, too.

In sum, humans have already kick-started a centuries-long, climate-changing domino effect. What’s left for us to work with at this point in time is the rate at which things change — can we slow down the fall of dominos?

According to the IPCC report, our best chance of setting ourselves up for success is swift action. If we can employ mitigation strategies before 2030 hits, we have a chance of preventing a snowball, err, sunball effect.